I know what you’re thinking… but… dare I say, it’s not what your thinking!  Taken from Hemingway’s “Old Man and the Sea”, it was a name given to the Portuguese Man O’ War due to the mistrust the animal set into fishermen.  For me, blind faith… I’d love to say youthful enthusiasm but I’m old enough to know better.

In January of 2006 I showed up at Harbor Island Yacht Club in Old Hickory, TN.  I got word from a friend that this was the only “real” sailboat club in the area so I went out there one day only to find a massive iron gate.  And I waited… until someone drove out.  When they did of course I sped in before the gate closed and if I stopped there I would have felt like I achieved something.  Getting into a gated club… without asking or explaining?  We all have that little hooligan in us that wants to feel like we’re getting away with something don’t we?  Ok, I have that little hooligan… Anyway, I got in and it just so happened to be a Saturday afternoon when they were getting ready for a race.  It’s called the Winter Series and it goes on every Saturday from Thanksgiving to the first of March.  I was walking around checking out all the boats and bumped into a guy who said, “you racing?” I’m not, I said.  A friend told me to come check the place out said if I wanted to race I could probably find a ride.  Kent (the guy) said, “Well I could use a hand setting these markers.” So I jumped onto a small power boat and headed out to set the big orange markers that designate the turning points in the race.  We talked on the way and I ended up hanging around out there every spare minute I had.  I volunteered to work with the Sea Scout troop out there and did whatever I could to find a ride on a boat.  Good weather. Bad weather. Day or night.  I was hooked.

Whore of the Sea already!  I know, I know. One day in March, I pulled in to find a group of guys standing on the dock next to a shabby looking boat. Sails and covers were torn.  Decks were filthy and covered with bird shit. The lines were crusty and permanently bent in shapes they’d been coiled into long, long ago. The interior had two feet of murky green water sloshing around in there and the carpeted walls were black with mildew.  The cockpit lockers cracked and whined when you stepped aboard and the teak looked as if it had never seen a can of varnish let alone a proper 7 to 10 coats.  I said, “What’s the deal?” A friend said, ‘the club owns it.  they’ve been trying to sell it but now we just need to get rid of it.  They’re gonna cut it up and chuck it in the dumpster.”  Remember now… I’m a… Ro`mantic… “What! Are you kidding? I can fix that!”  Keeping in mind, I’ve only really been sailing for about 3 months aside from some minor dinghy sailing about 20 years prior.  They all looked at me just like you’re looking right now.  I most of the sentiments went something like this, ” ARE YOU NUTS?” 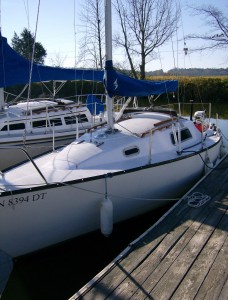 my backyard! Deal of the Century! Okay, maybe not.  I stripped that boat of every nut, bolt, line, hinge and wire.  I got up every morning and worked from 5 am until it was time to shower and head to work.  I came home after work and got right back into my grungy clothes and worked til’ dark.  I read every book on fiberglass repair and boat wiring imaginable.  I stumbled onto the bible “Good Old Boat” by Mr. Don Casey and I was delivered!

In August of that year, just a scant 5 months later, she was back in the water.  Sailing like a dream and no one at the club believed it was the same boat… nobody except one guy,  Bruce Richards.  Bruce is a legendary dinghy sailor who’s won titles all over the country.  He’s a small man but he’s got this vibe about him. He’s got the constitution of a jockey.   A world class jockey who drives champion thoroughbreds.  Swagger.  Calm, quiet swagger.  He stopped me one day when I pulled to the dock and said, “I’m glad you saved her.  She’s a champion you know.”  I looked around thinking, “Me?  Is he talking to me.” “Oh, yeah… thanks” I said, not knowing what the hell neither he nor I was talking about. “Do you know the history of that boat?” he said pointing to my now shimmering San Juan 24, hull number 206.  Uh, no… other than almost getting chopped up and chucked into  a dumpster, I don’t know anything.  Bruce went on to tell me that in 1983 or there about, my boat, “Whore of the Sea” won the national sailing title.  I couldn’t believe it!  That’s a big deal.  She had champion pedigree  and they were going to “put her down.”  He had a spry grin on his face when I repeated, “Whore of the Sea?”  Yep, he said, that’s her name.  And then he just turned around, still with that little grin and walked away.  He didn’t ever turn back but I heard him say, I’m glad you saved her.

To this day, I’ve searched high and low to find any record of that race.  I’ve asked any and everyone I could find if they know, knew or heard anything about the boat, the race or the jockey… the skipper.  The one who rode that champ to the line.
I wonder if his name was Bruce.