Happy New Year everyone.  With the holidays behind us and the awesome AeroPress give-away done, I can get back to the business of sailing and sailboats.  Funny thing… we’re not sailing. We are however adding to the ever-growing lists of things that need attention on “V” and preparing to pull her out for the bottom job that is long over due.  In the mean time, I am going to write a post I have both been looking forward to and dreading.  Looking forward to the comments and feedback all of you will provide and dreading all the comments and feedback all of you will provide! I’ve since spoken to many of my serious off-shore sailing pals and described the events I’m about to write about here and have gotten their takes and suggestions (as well as several, “WTF were you thinking!”) and now it’s your turn.

On our trip down this year, we had several bouts with weather and most of them you are familiar with as we usually posted on the Facebook page.  One event in particular was tropical storm Andrea that kept us sitting in Reedville, Virginia for about three days.  We were holed up in a safe and very secure anchorage just off the crab shack there and doing just fine, although a bit bored and damp from the dinghy rides ashore.  Nothing was open at that time of year (mid October) and the town was quiet.

The wind was 20-25 from the northeast most of the week. As we sat, we discussed the possible weather window for our continuation south, listened intently to NOAA and repeatedly checked Passage Weather, Wind Finder and several other weather forecasters in order to formulate the plan.  After a few days of this and not much positive news, we decided that we had sailed in heavy weather in the past and since it was N-NE and we were heading SSW, it was a manageable situation.  Melody has been in the Gulf of Mexico on several occasions when the wind piped to over 20 knots and was accompanied by rain, lightning, rising seas and reduced visibility. She’s of the opinion, “we are sailors and the only way to gain heavy-weather sailing experience is to be out in heavy-weather“.  As a licensed Captain, I don’t take that sentiment lightly.  Safety is the main decider aboard Vacilando. But, after much conversation and plotting our “ditch” options should it get too bad, we decided to poke our heads out and make for Seaford, VA just inside the entrance to the York River.  The entrance to the channel was south west and seemed like a very doable scenario with a NNE wind. 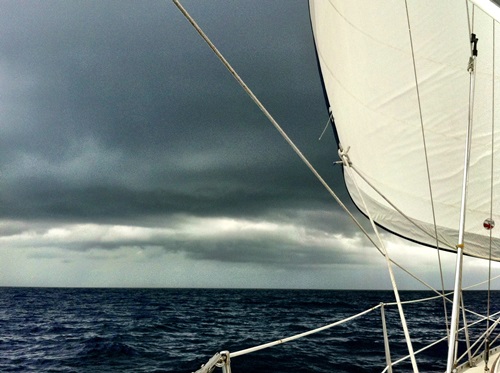 On this particular morning, as I stood on the bow I thought to myself, “I should tie in a double-reef right this minute before I even pull up this anchor.”  THAT right there should give you all the information and ammunition you all need to ROAST me for the poor decision I made NOT to do so.  When you think it’s time to reef, you’re too late.  This would later prove to be an almost catastrophic error.  I weighed anchor and we headed out past the completely rebuilt and quite impressive smoke stack that marks the Reedville harbor.  Two other boats followed us out so I wasn’t the only one who felt that 20-25 from the NNE was reasonable – a small Stone Horse 23 and a large Pilothouse that I didn’t get a good look at so I can’t tell you the make.  Anyway, as we passed the last markers into the Bay, we motored and fell off to our course for the day. I unfurled about 40% of the 110 on the furler and the boat was heading between 100 and 120% down wind.  The swell on the port quarter is the reason for the deviation but we were controlled and moving at a steady 6 to 7 knots.  I did leave the engine running just in case we had any issues and needed to maintain steerage.  The Stone Horse behind me had his staysail up and the Pilot House was under double reefed main. Not sure if either were motor sailing.

This configuration worked perfectly fine all day. We did roll a bit and I was wishing (and kicking my ass) that I’d double reefed the main and had it up instead of the furled jib. The wind began to build and by the time we hit Wolf Trap Light, the wind built to a steady 35 knots and was climbing.  The seas at this point were 10 to 12 feet and I’m bad at estimating that and usually go conservatively. Shortly after, the wind went due North and that made my decision to head SSW – a very uncomfortable one at this point. That would put me beam to the swell and ditching into the precarious Horn Harbor was not a viable option.

I’ve been pooped twice in my life. Having a wave break into the cockpit and into the back of your head is a scary situation to say the least… Both times were on this day about 20 minutes apart. Melody was down below in all of this WORKING… making phone calls and conducting business and had no real idea what was going on until she poked her head out. I still cannot believe she was able to function down below. She felt the increase of wind and seas and was astonished when she came into the cockpit.

I wanted to go forward and reef, albeit way too late, but she was not in agreement with me going on deck in the conditions as she had never steered in wind and waves like we were then experiencing. I wasn’t going to fight with her in this situation or argue but I should have gone forward and reefed.  Spotting and then getting Wolf Trap Light to pass on starboard was a harrowing task as the seas were bowling me straight into it and my rolled up headsail had very little drive.  The engine was now compensating for my poor decisions and I struggled to get the boat to respond as it would if properly canvased. Not much was said on deck as we did get around Wolf Trap and then had to point up into the York River.  We would have to jibe the headsail.

The waves astern were swinging the boat to the point were the jib did backwind and jibed a couple times unintentionally.  I thought we might lose the rig. I really did.  I wish I had better notes of my compass course and the exact wind direction but I don’t. I know we were trying to find a very narrow channel to the York River entrance and to the west of that Channel lay depths of three feet.  I had very few options and of course as you all know, things get worse before better.  Visibility was about 1/4 of a mile with torrents of rain coming regularly. Usually I welcome rain as it will often flatten the sea state.  Not today, not in the shallow water that we were in.

Since the Jib was uncontrollable in this sea state, I furled it completely. This is where we may as well have been playing Russian Roulette.  I motored with our 1984 Universal Diesel, beam to the seas for about thirty-minutes in an attempt to find that channel marker.  We pitched and rolled violently for every, single one of those minutes and before it was said and done, I saw a steady blast of 43 knots on my instruments.  I stopped watching the gauges after that and tried desperately to show no fear or concern as Mel was now in the cockpit with me brandishing the binoculars trying to find our mark.  I had the chart plotter on and yes it was on there but as you all know, that’s a “cartoon” of where you are in the world… My concern was once we spotted that Red marker, would it be to starboard where it should be or have we been blown so far off that we were also outside the Green as well.  The long and short of it is, we found the Red and yes we had it where it needed to be.

We got into the channel and the anchorage where it was still blowing 25 knots. We spent several days in Seaford experiencing the incredible generosity of those folks at the Seaford Yacht Club and playing over the trip a hundred times.  One clogged fuel filter… one simple engine failure that had been happening pretty frequently, and we would have been on the rocks.  By the time I could have gotten to the main and tucked in the reef that should have already been there, we would have been at the mercy of those ridiculously steep Chesapeake waves.  I fear I’d be telling a different story.  I will say, our CAL 35 is an amazingly unassuming vessel. We have repeatedly been in some tough weather and she is a good little ship.

A couple months removed, I am posting this to prompt discussion.  As I’ve said, I have spoken to several folks and they’ve confirmed what I knew in my heart but I promised to write this and lay it all out there.  That said, feel free to critique and filet my decisions.