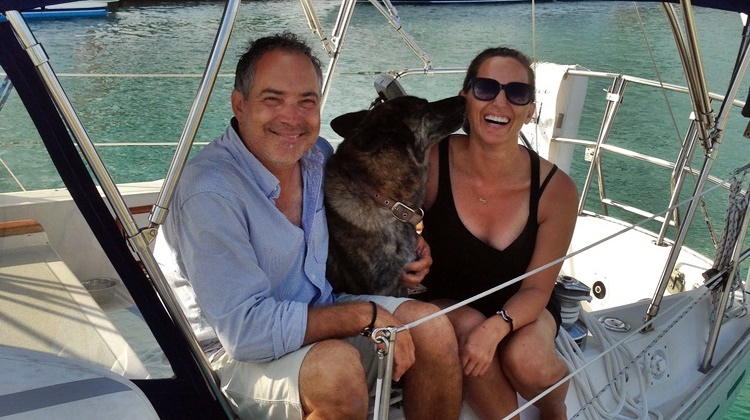 You see, once we made it down to Guatemala for hurricane season and had a chance to take a bit of a rest, we noticed for the first time that Jet’s getting old. It’s hard to believe he’s over 10 because he still acts like a pup sometimes. During the trip down, he was a rockstar. I mean, seriously, we couldn’t have asked for more when it came to him (except the time he pooped in the dinghy and we had to… well, if you haven’t read our latest post, you’ll have to just read for yourself).

Anyway, he was a champ. He stayed calm in rough seas, tolerated getting in and out of the dinghy several times a day, and behaved himself with territorial stray dogs throughout Isla Mujeres.

But a couple months ago, Chris and I had a long talk. We didn’t like the thought of putting him through more tough cruising right now. His pannus (eye disease) is getting worse, and he will eventually go blind. To sail with him not being able to see would be cruel and stressful, and he deserves better.

In addition, with neither of us being “retired” yet, trying to work while cruising has honestly been tougher than we thought it would be. Finding good wifi in the states was a bitch, and in the Western Caribbean, even tougher.

I (Mel) had a great freelance gig come up while we were in Belize and we had to change our plans and stay in Caye Caulker an extra week because we knew I wouldn’t be able to get wifi further down in the outer islands. Even in Caye Caulker the wifi was slow, so it took me twice as long to finish the project than it normally would have, and time is money.

As you know, we released Chris’ book Burning Man in June, and it’s been tough to market it like we wanted from all the way down here (even though it did hit the Amazon bestseller list!). He has also been writing a few scripts for a TV show and unfortunately, the wifi here in Rio Dulce can be unpredictable at times, too. We are, after all, in the jungle. But the entertainment business doesn’t care that we’re in the jungle and that the howler monkeys took down a power line. They just want their script.

We have a few other potentially awesome things coming down the pipeline, and we’d like to be prepared for them.

All that to say… Vacilando is SOLD.

Yes, as of yesterday, the old girl no longer belongs to us, and has a new owner who we are confident will love her as much as we have. I’m not gonna lie… even though we knew this was the right decision, every time we got closer to a done deal, we had reservations. After all, this has been our home for almost 6 years.

We’ve laughed, cried, and loved on this boat. She has carried us safely through calm seas and angry storms, never judging us – just doing her job. She’s been our safe harbor in so many ways. It’s hard to let go of something you love… but it’s time.

As for what we’ll do now?

Well, the truth is, we’re not sure. We’ve run so many possible scenarios through our heads and our minds change daily… Get a catamaran? Easier on Jet, more room, we can just park it somewhere (with good wifi) and live/work on her until the time is right to go cruising again… Or maybe an RV? A “land yacht” where if Jet needs to go we just pull off the side of the road – no crazy dinghy rides looking for a place to poop. We can do a state and national park tour… something we’ve both dreamed about.

But to be honest, we don’t know if we’re ready to head back stateside quite yet. We’ve loved the challenges that being among other cultures has presented us, and we’d love to see more and learn more. Our Spanish is still pretty terrible, and we’d like to improve that.

All we know for sure is that we’re going to spend a month in a cool little place to decompress. You may hear from us, or you may not. We just need a little time to figure out our next steps and how to navigate our way through this new way of life, whatever that is.

We’re a mix of emotions right now, but we know there’s a new adventure around the corner, and we’re excited to see what it is.

To everyone who has inspired, encouraged, and helped us throughout the past 6 years…we cherish each and every one of you.

Thank you for coming along for the ride.

MELODY: Writer who thought her boyfriend (now husband) was crazy for wanting to live on a boat, but never one to shy away from an adventure, decided to play along and fell in love with cruising. She blogs about being a digital nomad and how to make money while cruising at Saving to Sail.