I know… I know… it’s been a very slow summer here at MondoVacilando and I know what you’re thinking. We are just like all the other bloggers who start off strong with weekly posts and then within a year, the posts dwindle to a measly one per month, then every other month and before you know it… once a year. I promise that’s not the case here. This summer has been a summer of big decisions and a lot of “behind the scenes” activity.

As you know, Vacilando is for sale. That was by far the biggest decision we’ve made since deciding to sell the house and live aboard a couple years back. Once we landed here at Spring Cove in Solomons this past June, I got straight to work on my fourth record which has been a long time coming. When we left Nashville, I was deep into a long writers block and after about ten years, its released its grip on  my psyche and not knowing how long that would last, I’ve been drinking mightily at that spring for the last three months. It’s hard to leave a place like this when they have been so gracious. They offered me a work space to use after hours and late at night, while the marina sleeps, I’ve been holed up working and recording. When people ask, “Why haven’t you sailed anywhere all summer?” That’s the reason. Not to mention, this place has become our home away from home and the people here like family. If you’ve never been to Spring Cove in Solomon’s, you owe it to yourself to come visit for the weekend.

We spent a couple weeks in July on the hard doing a bottom  job, replacing a cutlass bearing and doing some other maintenance. Once we splashed “V”, we had a friend come visit for a wonderful night of wine and food and then it was back to work. About two weeks ago, we took V on a much needed sail out across the bay and when we were returning late afternoon, we decided to bypass the turn up the creek to our slip and instead, headed up the beautiful Patuxent River to Battle Creek, where we promptly and completely ran aground.

The grounding was so soft neither of us even noticed. We had been doing about a half a knot and I was going forward to drop the hook. Once at the bow I n0ticed we’d stopped. I looked back to Mel at the helm and was about to say, “Nice driving baby!” until she said, “I think we’re stuck.” And we were. Super soft sand gently captured our newly painted keel. We figured we might as well clean the fish and eat cause we’d be there ’til the tide came up. Turns out… that full moon had a super sucking effect on that little Battle Creek and extreme tideswere in order. No matter, we downloaded a movie and Melody got to try out her super slick, filet knife. We had a lovely dinner, albeit at 20 degrees to starboard, and then at midnight, we kedged ourselves off as easily and unspectacularly as we had put ourselves on. We dropped in deeper water and fell swiftly to sleep. I know I left some of that expensive bottom paint on the sand at Battle Creek but at least it was “environmentally friendly” bottom paint. “It’s only money right?”… said us, never.

So here we are… September. Where has the summer gone? Every year I say the same thing. I marvel at how glorious it is when it’s here and sit stunned when I realize its gone. This year, we come upon fall with some more decisions to make. Where we’re going to live this winter is the big one. We are thinking of pulling V here in Solomons and leaving her for the winter but that leaves us looking for a place to rent and I really don’t want to be up here when its winter. We don’t want to put the mileage and wear and tear on the boat to head all the way back to Florida, but to pay winter storage and rent is not really smart either. It’s closing in fast and we must decide something soon but isn’t that the beauty of this lifestyle? We call it “flexibility” when really its a bit maddening at times.

I have officially finished recording most of what will be featured on this record and now we’re just putting the finishing touches on. It will then go to my dearest of pals Michael Romanowski in San Fran for him to mix and master. I plan to have a pre-Christmas release. Melody continues to work remotely for the company she’s been with since we left but they continue to increase her work load. She still finds time to make her awesome nautical jewelry and its selling like gang busters! I’ve been working on a second book but we’ve put it on the back burner until the record comes out. The freelance film work I was doing in Ft. Lauderdale has been nonexistent this summer and I’ve not made a single trip down. I guess I look at that as uninterrupted time to work on the music. 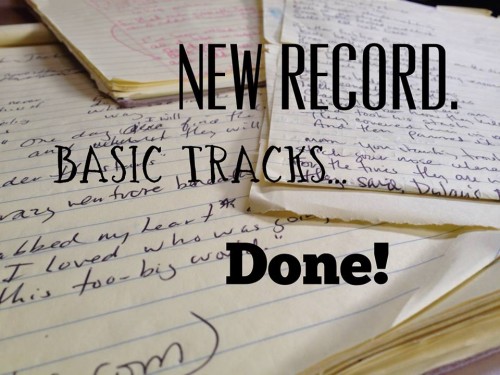 I have also enjoyed my afternoon runs around the island while pondering the big question, “what next?” I don’t know what comes next. I guess I’d like to know Vacilando will sell to someone who loves her and sails her the way we did. I’m very excited about the new songs and grateful that one of my greatest passions, songwriting, returned to me this year. I’m totally blown away that Melody and I just celebrated our eight anniversary together and as long as she’s around, what next doesn’t really matter. We know that we’ll be on some boat, somewhere doing something and we hope you guys are still reading and sharing your thoughts with us. We’d love to be traipsing around the globe like some of our compadres but for right now we just gotta take what comes. Much love to you guys. Sorry we’ve been so quiet.