After 20 of the most uncomfortable travel hours I may have ever encountered, the bus squealed to a halt under a concrete mezzanine. Masked passengers shuffled, single file. A crisp, pre-dawn air replaced the barnyard atmosphere and, within minutes, I found myself rummaging through bags of luggage in search of my buried bike.

Panic rose as I envisioned bent handlebars, shifters, derailleur, or brake discs; none of these things–if broken–would be replaceable at three o’clock in the morning in Tecate, Mexico.  Which was fine because I wasn’t in Tecate. To my surprise, the bus dropped me in Tijana, an hour west of where my ticket said I should be.

With my bike in tow (nothing bent or broken), I made my way through the overly lit station to a dark-skinned woman at a taller than necessary counter. I politely asked why I was in Tijuana and not Tecate to which she replied, quite tersely, “Ese autobús no va a Tecate.”

That bus didn’t go to Tecate? Hm. But my ticket…

I pled my case, showed her the ticket, and then promptly paid $525 pesos for another ticket to Tecate. It was three in the morning, she was not hearing another word of my mediocre Spanish. 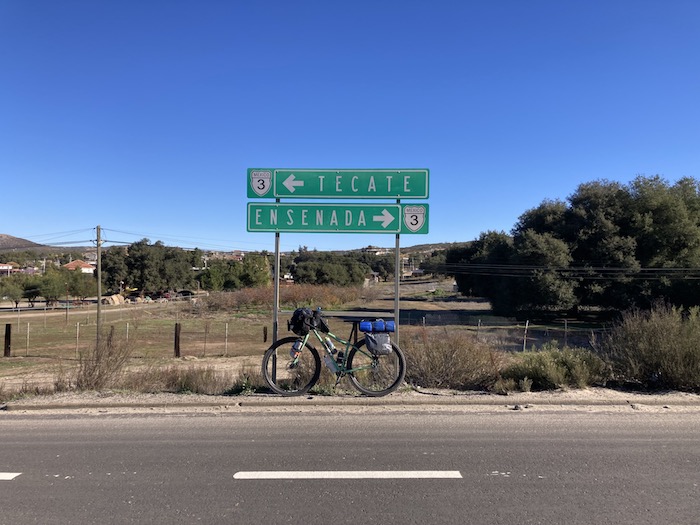 Three hours later I was finally pedaling. My eyes and legs burned with the same intensity climbing steep, paved streets out of Tecate. The famous brewery sign towered over my route. No sleep to begin one of the most grueling bike routes on the planet, The Baja Divide. 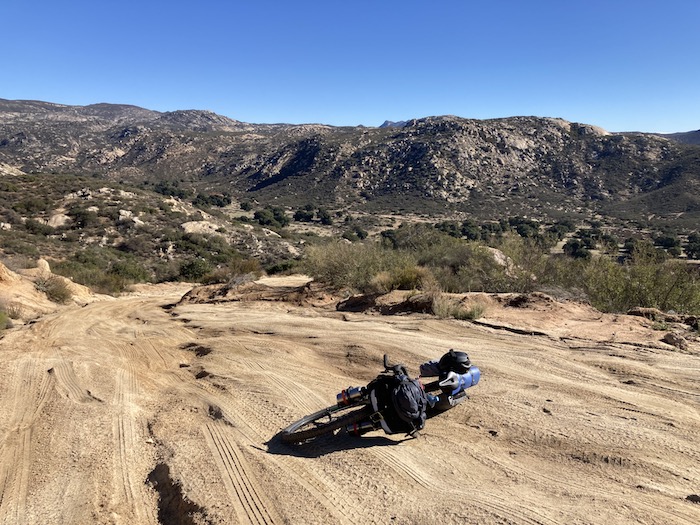 H.G. Wells said, “When I see an adult on a bicycle, I no longer despair for the human race.” Novelist and philosopher Iris Murdoch wrote, “The bicycle is the most civilized conveyance known to man. Other forms of transport grow daily more nightmarish. Only the bicycle remains pure at heart.” And the poet William Saroyan called the bicycle, “the noblest invention of mankind.”

Although, something I must include at or very near the level of the venerable bicycle is a sailing boat. You had to know it was coming. I’m a hopeless romantic when it comes to travel in either of these manners and here’s why.

Aside from the pure joy that comes with peddling a bicycle or sailing a boat, there is an approachability that accompanies an arrival by bicycle or boat that you don’t experience in a car, plane, or motorcycle. When you arrive to a place by what most modern folk deem antiquated propulsion, you are not seen as a threat. Quite the opposite, in fact, most will look upon you with something that approaches pity. “Oh, that poor sot. Let’s toss him a few dollars so he can eat a proper meal.”

They simply want to talk to you. They’re curious. Where did you come from? Where are you going? How long have you been out? Their eyes light up. I can’t tell you how many times I’ve been stopped by people who want to tell me a story of how riding a bike helped them lose weight and regain independence long lost.

My bicycle is a time machine. Ahead is the future. Behind, the past. And I sit firmly in the present where, without effort, there is no forward motion. A simple contraption, beautiful and perfect. But I digress.

I had been reading about the Baja Divide Route since it was published in 2017. Mel and I were living in Oaxaca, Mexico at the time. While there, I built myself a dirt-touring bike to wander off into the mountains on multi-day trips. After nearly a decade living on a small sailboat together, Mel enjoyed having the space to write and work on her creative stuff while I got to clear my head and work through my ideas.

I never imagined I’d ever have the time or the occasion to attempt the Divide, which could take thirty days or more, but I enjoyed slipping off into the slipstream. Not unlike when I began to fantasize about sailing away many years ago.

Funny how dreams work. We’re in Baja now and have been since 2019. Of course, in March of 2020, the world shut down and hasn’t been right since. Riding a bicycle through closely knit, indigenous villages during a pandemic didn’t feel like a responsible thing to do. This year, it felt different. It seemed as if things had settled down a bit, south of the border anyway. Mexicans were still wearing masks and taking the pandemic seriously and I had no problem adhering to that philosophy. Not to mention, a few gigs I had lined up had fallen through. I had nothing but time. I don’t do well with idle time. I was a bit down in the mouth and if I’m completely honest, not much fun to be around.

On another front, rumblings began to surface about the route changing. Farmers along the Divide route were considering revoking the access to their lands, due to the damage being done by commercial motorcycle tour groups and the infamous Baja 1000 race. If the farmers decided to block access to their land, the original route would cease to exist. It’s remote country, workarounds and rerouting can be nearly impossible. I wanted to ride the original trail.

After much thought and consideration, I decided that if I was to attempt this ride, it had to be this year.  After all, I’m not getting younger. So, on January 2, I boarded a bus that would take me north from Loreto to Tecate (supposedly). The border town would be the beginning of a 1000 mile ride back to our apartment; solo and self-supported. 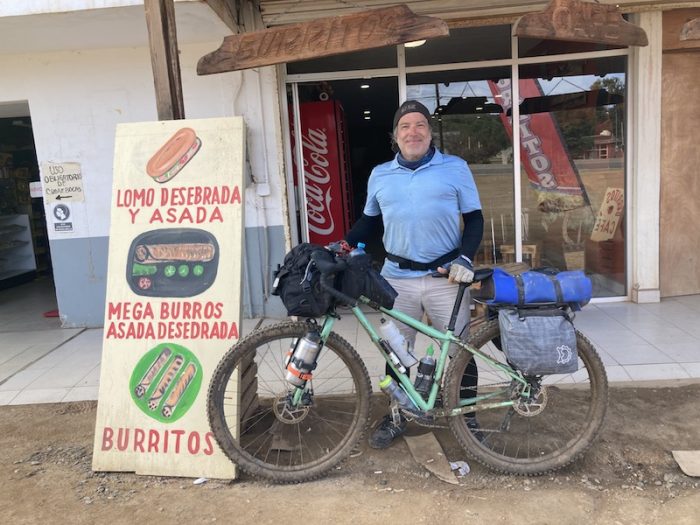 I had no intention of ever writing about it, posting on social media, or making any mention at all. There was no research for a book to come later, few photos and fewer notes in the pocket notebook I carried. I hesitated to tell anyone outside of our closest circle. This was for me.

It was not a vanity measure or mid-life crisis, as some have suggested. I wasn’t seeking to conquer anything.  I was simply trying to exist within the parameters it was giving me on a given day. 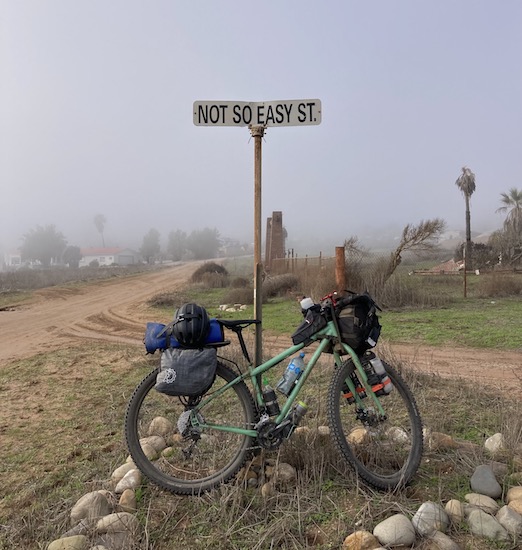 Each day was paired down to the simplest of tasks. Get on the bike. Pedal as far and for as long as you can. I thought of nothing but the mile in front of me and then the mile after that and the mile after that. I managed as best I could, the punishment to my bike and my body. I spent countless hours trying to silence the voice in my head telling me to quit. There were moments that brought me to the edge of tears. But the people I met along the way inspired me whenever there was a moment in question and it’s because of them, their kindness, and camaraderie that I decided to post.

This was the year I met the most broken version of me and the strongest. It’s not fun admitting that but without struggle, there is no growth. There’s also no growth without honesty. Truth can be hard to swallow, but so is regret. The problem arises because I believe, at this age, there shouldn’t be any more broken. I know that’s an unrealistic belief.

At least I realize that I would be better served eliminating words like should and shouldn’t from my vocabulary. Either way, I’ll spare you the metaphor of pushing a heavily loaded bike up steep, rocky hills, day after day. You get the point.

On the last day of the ride, one of the most difficult terrain-wise, I was excited to see Mel but sad that it was ending. After 22 days on route,  I was filthy. My threadbare shorts were falling off and embarrassing, but I was in the finest shape of my life. I never felt stronger–physically or mentally. I wanted to keep going. Anywhere.

I was snapped from my fog when, from out of nowhere, my friend Bill appeared on the trail a few miles from where it exited on a paved road. An amazing photographer, Bill said he wanted to snap a few photos before I hit the pavement. Seeing someone you care about after such an experience provides extra lift under tired wings. He gave me a bag of peanuts and a frigid can of Coke. They might as well have been lobster thermidor and a bottle of Dom.

The road to Loreto is a difficult one comprised of steep grades and sandy bends, a few at 14%. After a long day on the trail, I was tired but invigorated. As with most days during Baja winter, a strong wind was blowing from the north, directly into my face. I peddled as hard as my heart would allow. I knew I could burn it down as there would be no need to preserve my body for the next day.

Cresting the last small mound, I blasted around a blind curve that pointed directly at highway 1 and the turn marking my arrival at the town limits. My breaths were short and labored. My legs burned but I refused to give them any respite. With my head down and the wind rushing past my ears, I imagined I heard someone yelling. Out here? Couldn’t be. Keep pedaling.

I heard it again and looked up.

Tears filled my eyes–I blamed the wind–when I saw a line of people spanning the road and, in the center, my wife, Melody running toward me with outstretched arms. She had gathered our closest friends for my arrival. As it turned out, they were all following my GPS tracker. Truth be told, I think she sent Bill forward as a scout. I was greeted with the finest tequila and finer friends. 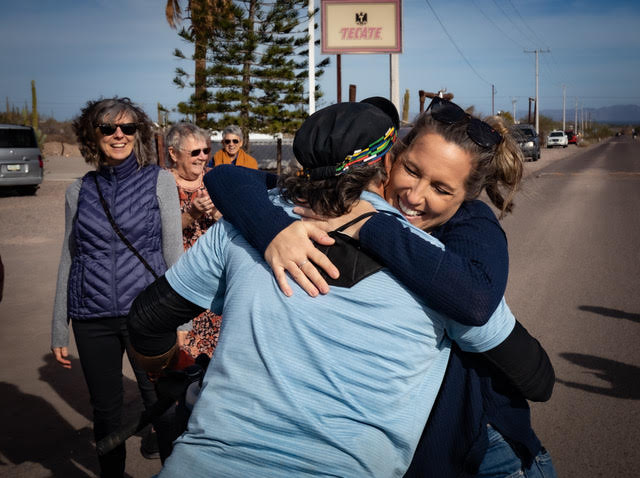 I don’t know if I’ve ever had a moment where I felt more loved and supported, I really don’t. I simply couldn’t believe all of these folks took time out of their day to stand in the road and drink tequila waiting for a foul-smelling me to arrive. It will forever be one of my favorite days. 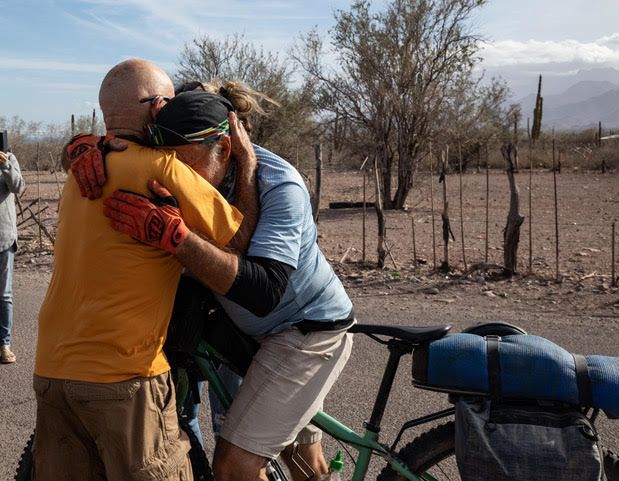 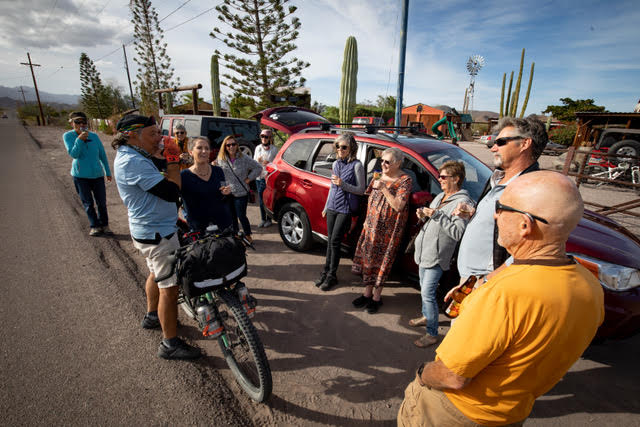 So…here it is, the post I was never going to write.

It’s not about a bike trip. It’s about love. About the wealth that comes with friendship and…it’s about the sand.

Some of the hardest days on the trip were spent pushing my loaded bike through ankle-deep sand. Mile after mile after mile. It’s in those moments, I came up with, what I call an affirmation. One that relieved a lot of stress and pain and one that nearly always brought a smile to my face.

It’s gonna suck until it doesn’t

You see, someday this is all going to end. None of us knows when that will be. Why not enjoy every moment equally? The ones on top of the mountain with the same vigor as the ones trudging through sand because eventually, the sand runs out. 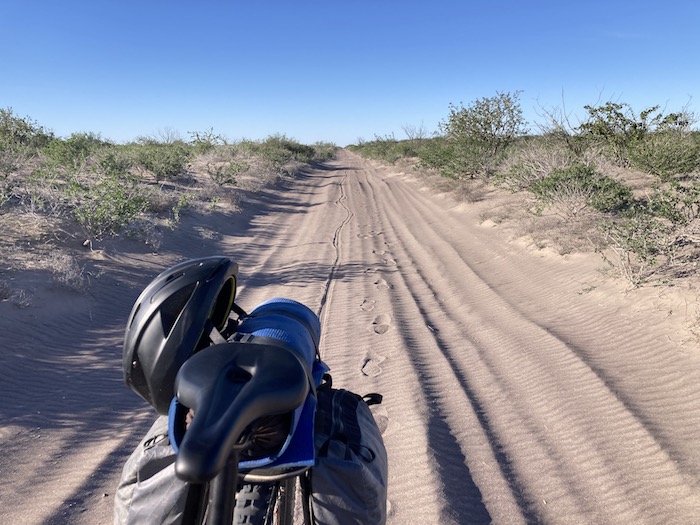