This is usually my favorite time of year. Baseball season starts. Hockey kicks into the Stanley Cup playoffs and summer is right around the corner. This year? The Nashville Predators and Philadelphia Flyers are both booking tee times instead of logging ice time. The Phillies look to have a “re-buliding” year ahead of them and since we’ve been in south Florida for the last six months, we’ve missed that horrible winter up north and I’m not anxiously anticipating wearing my flip flops… I’ve been in ’em since Labor Day.  Alas… I guess the only thing I’m getting excited about is the new standing rigging.  Woo-hoo! Livin’ large here on Vacilando! Right?  Just sitting here chilling with a couple pit-bulls, super models and the Cristal on ice. Uh… not really. 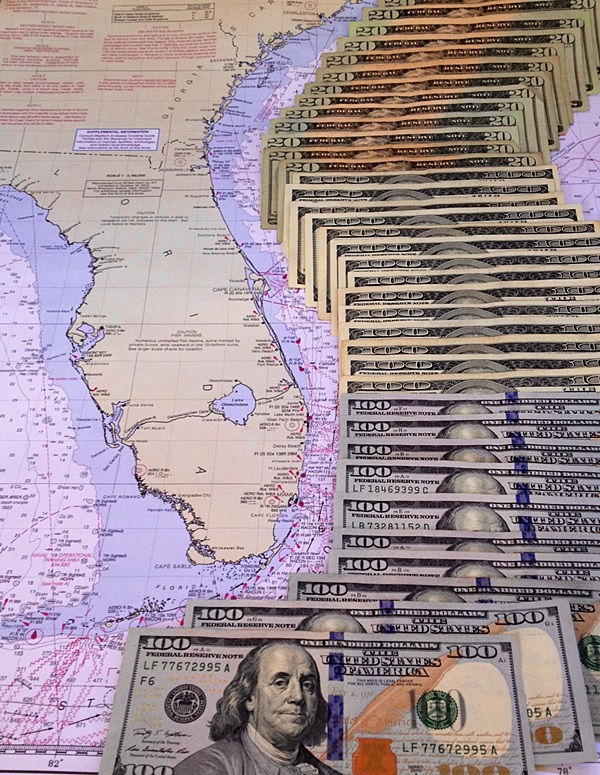 When we bought the boat two years ago, the rig was questioned by the surveyor since there was no way to tell exactly when it was last done. We knew we wanted to redo the entire standing and running rigging at some point in the near future, so we decided to have an inspection done here by the local rigging giants, Nance and Underwood. I had been to N & U twice, once for a furling line and once for a quote on some halyards. Both times they were rude and a little pricey. But… since we’re working on a time frame here and after calling several other riggers, they were the only ones who could “squeeze me in.”  I should-a known.

Now… the photo you see, you know… the chain plate with the massive crack and rust… yeah that one… was examined by our “inspector” and found to be in “serviceable condition.” He said we just had some “surface rust” that we should hit with a scotch brite. By the way, he used his iPhone for his flashlight and only inspected three out of my six connection points stating, “We assume they’re all in the same or similar condition.” I kid you not. That’s a direct quote.

Neither me or Mel felt good about the inspection and as soon as they left, we went behind them and did our own inspection. The surface rust he casually mentioned was hiding the crack you see above. Oh, and the “new” looking chain plate below was literally one inch away on the other side of the bulkhead. How do you feel about those assumptions now?

Listen, Let me say this… I don’t use this blog to bash on people or go off on tirades and God knows I can go off on a tirade or two.  I could go on and on about them not using a magnifying glass, not taking photos, not even removing the boots on my spreaders, etc… etc… etc… I’m not going to do that. I did pull those chain plates off and drove to see Mr. Underwood personally.  I told him about the “inspection” that his boys did.  I told him that I didn’t pay $255.00 for an assumption, I paid for an inspection. I showed him the chain plate that you see here and his chin nearly hit the floor. To his credit, he was receptive and not the least bit defensive. He looked me straight in the eye when I spoke. He took photos and refunded every cent. I actually liked him a lot.  I will never use his company again but I think he’s a decent guy.

The U-Bolt above… that was made by Navtec. They have great customer service but no more U-bolts. They stopped making them. The company who does have them… is Rig Rite. They should change their name to “Rip Ur Ass Rite Off” because they are gouging people by charging $300.00 for a bolt that should cost less than a hundred bucks.  Several boats use this U-bolt with the Navtec rod connectors (Cal, Ericson, some O’Days) and the forums are ablaze with people searching for options.

At this point, we made the decision to replace all of our standing rigging before we head offshore. For our rigging needs, we were referred to Sailing Services in Miami. Brion Toss recommends them highly and now I know why. Brooks and Richard are fantastic! They gave me an incredible price and they spent almost an hour talking to me about the f-ing u-bolt issue, drew up alternative configurations and Brooks even called his friends to see if they had some laying around. No dice.

I took the old chain plates to AIM Welding and Fabrication and they made me two new ones. They are a tad over-sized, beautiful, and get this… they only charged me 95.00 bucks! Scott is awesome. If you need anything stainless or aluminum, check them out. I saw them building some vintage motorcycle gas tanks and was blown away by the detail.

Problem was we still needed to figure out the u-bolt issue but we’d spent a heck of a lot of money on all the new rigging and mechanical fittings (we went with Sta-Loc) so a re-engineering project was not on the books… We bit the bullet, or the bolt should we say and purchased two of the u-bolts and I will say this… F.U. Rig Rite. Their customer service is terrible and they don’t give a shit about ripping people off. The guy who own’s the place apparently doesn’t believe he’s doing anything wrong. The forums are also full of people raging about what a shitty company he has. Apparently he doesn’t believe that either. I hope he chokes on his fucking bolts personally…

What’s the point of all of this?  The point is this… know what you need done before you call someone to do it.  If at all possible, do some research and find out even a little about the job ahead of you. Youtube is an incredible resource for any project you might need to undertake.  Google it and chances are you’ll be able to find enough information to have some clue about what the mechanic, rigger, canvas person, whomever, is about to do or should be doing. You’ll be better able to spot a shoddy job or ask a question that should be asked.

To sum it up… we purchased the u-bolts and that’s a done deal. We got all our wire and connectors from Sailing Services along with a new ProFurl.  A local rigger named Brad Storm (Storm Rigging) let me work with him for a couple days and in return, he loaned us his mast climber and other gear and we are going to re-rig the boat ourselves. We’ll let you know how it goes. Fingers crossed… we’ll be heading out Port Everglades Inlet on or about the 17th of May!