The holidays are upon us. And, for the crew of Vacilando, it’s the second year in a row that we’ll be celebrating Christmas and New Years outside the United States. Last year we were in Antigua, Guatemala. This year, we’re in the vibrant city of Guanajuato, Mexico. The high elevation (6800 ft.) means crisp, chilly mornings and temperate sunny days.

In full regalia, the street lights drip with gold and silver garland. Two-stories-tall Christmas trees can be seen in small, cobblestoned plazas or in front of the many churches that dot this historically conservative Catholic town. In fact, this city is so conservative that in 2009 the mayor passed a law proposing jail time for public kissing and for using ‘slang’ on city streets. 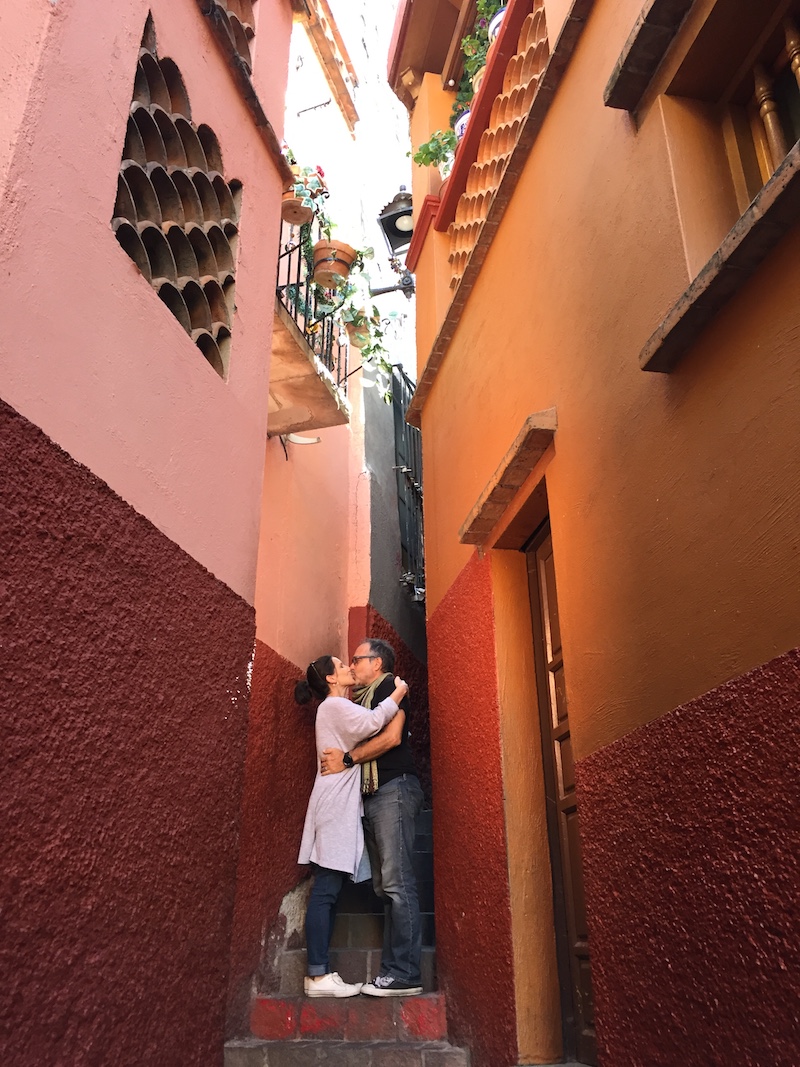 However, you can steal a an “illegal” kiss in the Callejon del Besso (Alley of the Kiss). Legend has it that kissing on the third step (yes, only the third step) of this alley will bring 7 years of good luck. Kiss on any other step and you invite 7 years of bad luck. “Why chance it,” I say.

Guanajuato is home to Miguel de Cervantes, commonly referred to as one of the greatest Spanish writers of all time. His most famous work, Don Quixote, has been translated into over 140 languages and dialects. It is, after the Bible, the most translated work in history. 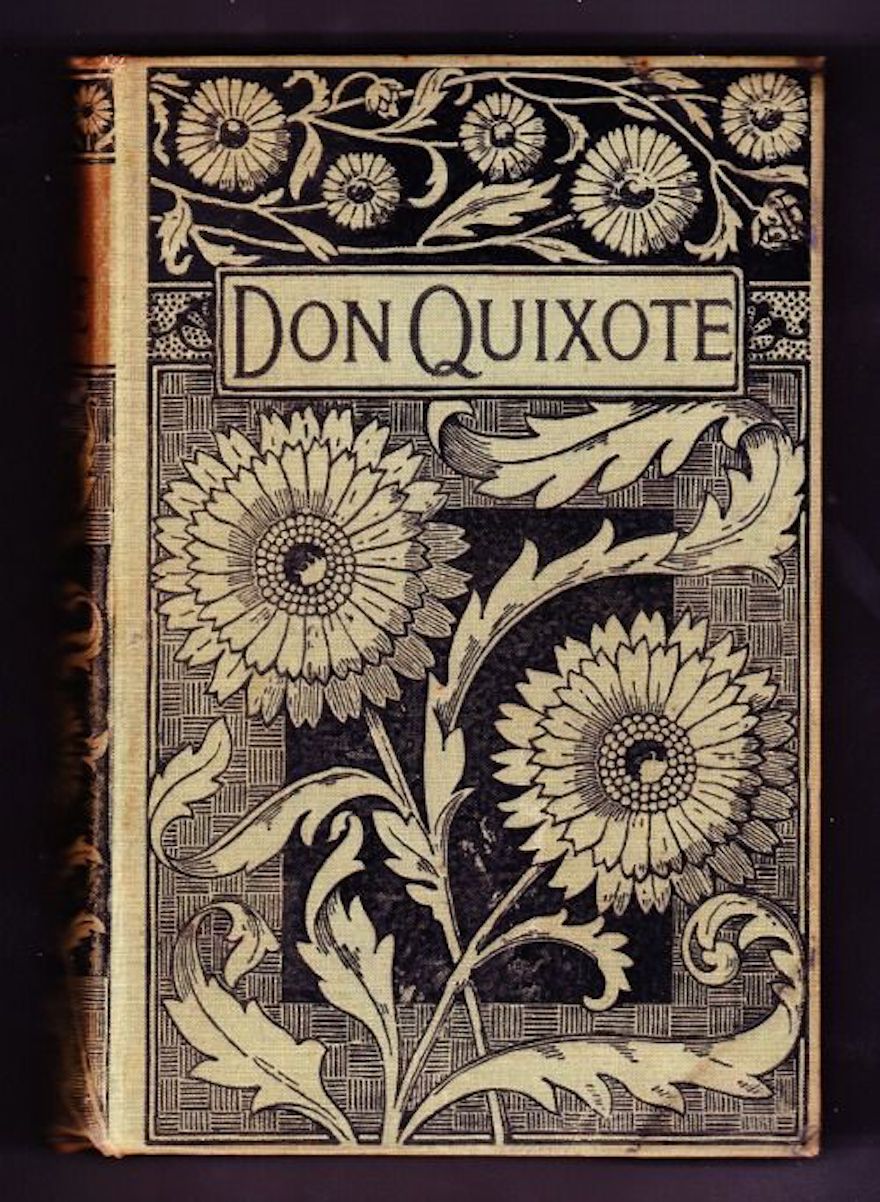 Guanajuato’s other famous (and controversial) resident was famed painter, Diego Rivera. Perhaps more famous for his marriage to another controversial Mexican painter, Frida Kahlo, Rivera’s childhood home was refurbished and turned into a museum. While it doesn’t house any of the later, larger Rivera paintings, it does contain many of his early works that many people may not be aware of. Personally, I had no idea he dabbled in cubism and experimented with styles that mimicked the French painter, Paul Cézanne. 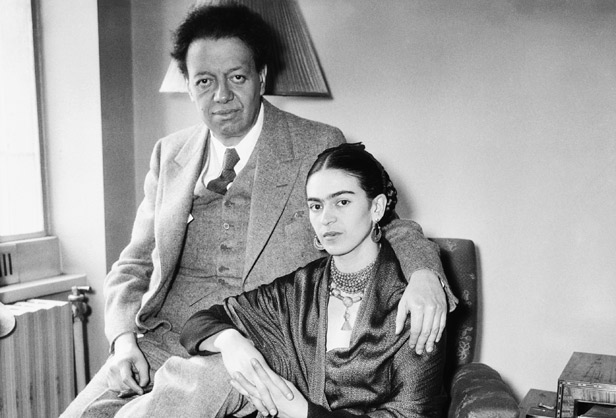 This will be the last city we spend any significant time in before heading back to the states in January. Being here at Christmas time is something I’ll always treasure. But, it comes with a twinge of melancholy because usually, Christmas is a time when we gather with family and friends. Our family and friends are far away. I felt the distance last year and I feel it again this year. There is a bit of longing for laying on the rug in front of a warm fireplace. A glass of wine, and a holiday meal with people who know who you are.

Mexicans are deeply devoted to their families. On most Sundays, parks are full of families hanging out enjoying the day. Here in the little neighborhood we’re currently in, the holidays bring with them the evening Posada ceremony, something I had not heard of until we arrived here to Guanajuato.

While most cultures around the world celebrate the 12 days of Christmas, here in Mexico they celebrate the nine days from December 16th to Christmas Eve (Noche Buena or Holy Night). These nine days commemorate the pilgrimage made by Joseph and Mary in search of a room. The Spanish word for “Inn” is Posada.

Each night, a different family hosts a posada in their home. Doors are left open to welcome pilgrims and along with singing, traditional food, and prayer, simple gifts are given to everyone who comes. The evening usually ends with the local children taking whacks at a piñata while adults supervise on the sidelines. 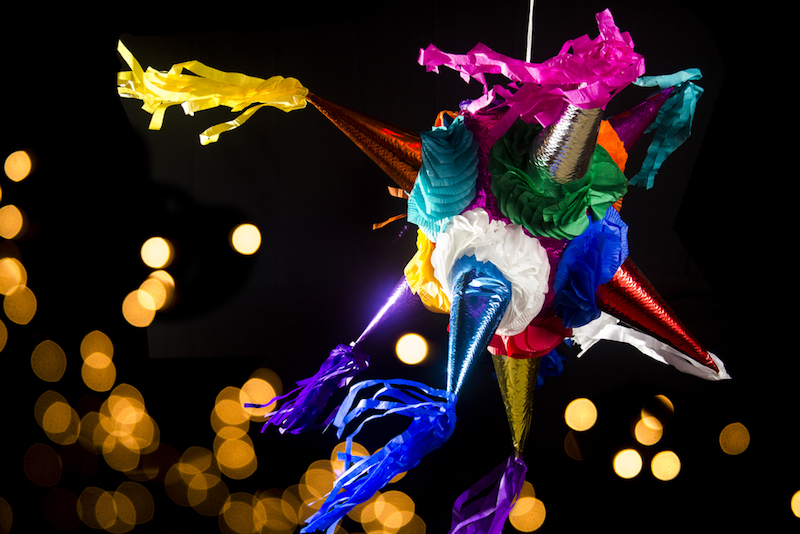 Earlier this week, Melody and I were invited by the woman who owns our Airbnb. We were excited and nervous. We didn’t want to infringe on what seemed to be a very personal tradition. At dusk, we joined a small group of about 20 neighbors on the basketball court below our apartment. I guess they do it this way because houses are so small here. Mel and I hung way back in the shadows. We tried to blend into the stone wall as best we could. We only meant to observe and then quietly retreat.

Each person held a small, white candle that softly illuminated their faces. A nativity scene was perched atop an adjacent knee wall. There was singing and storytelling. While we didn’t understand all of the words, we understood completely the sentiments. After about 20 minutes, everyone began to line up and a woman handed out two small, brown paper bags to each person in line. This was the point where we tried gracefully to make our exit.

From nowhere, a woman made a bee-line for us and grabbed Melody by the arm. She invited us to get in line. “No gracias! Tu’ eres muy amable.” We explained we were just there to watch. We didn’t expect a gift. We didn’t bring a gift. She persisted. We got in line.

We were embarrassed to be made the center of attention, but we smiled and graciously accepted two paper bags, each one the size of a lunch bag I remember from grade school. One bag contained a few tangerines, a lime, an orange, and one other sort of citrus fruit local to the area. The second bag was full of candy, dark chocolates, and sweet marshmallows.

After the gift exchange, Karla (our new friend and host) insisted we stay for a cup of warm ponche, a tea made from guava and cinnamon. Floating in the tea is a mixture of raisins, tamarind, walnuts, and hibiscus flowers. I tried to excuse myself to run back to the apartment for our cups, but I was told not to bother. They had mugs for us. Karla then introduced us to her family and many of the other neighbors. While we continued to get to know everyone, the piñata was hung and the children boiled over in an excitement, fueled by candy, marshmallows, and ponche. 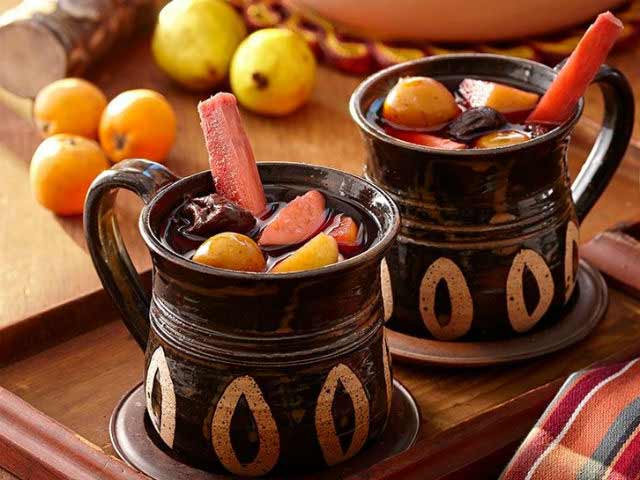 There was more singing and conversations articulated with hand gestures (they never work). We learned that the seven points on the piñata represent the 7 deadly sins. The sinner strikes the piñata in an attempt to bash those sins. Once those sins are sufficiently battered, the sinner is rewarded with the piñata spilling out it’s contents. More candy! When it was all over, we helped pick up trash and remnants of paper-mâché. We were sent off with hugs and kisses. What a night. 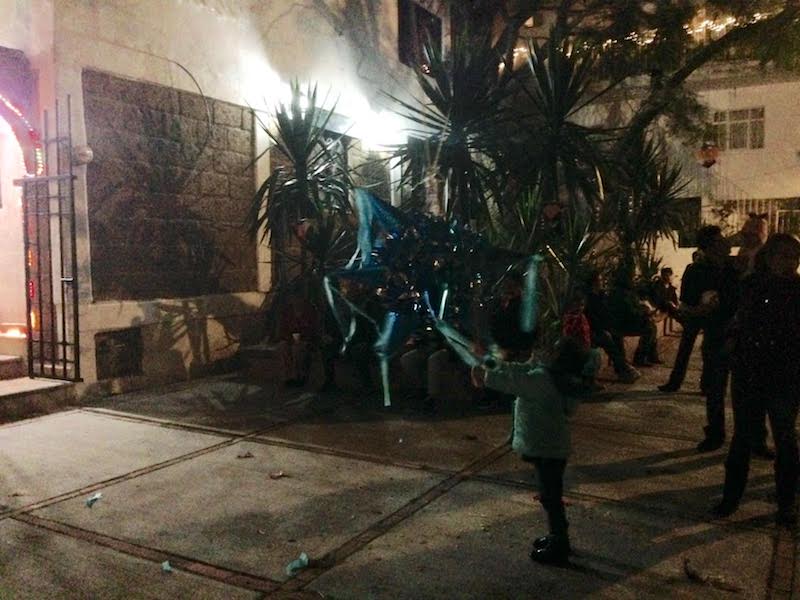 During the Posada, the host acts as the inn keeper. The guest are the pilgrims. It dawned on me then, that Melody and I were those pilgrims. We dropped in on these people and they opened their arms and received us. They bestowed simple gifts upon complete strangers. They offered us a warm drink on a cold night. They extended their family and their tradition. They included us.

Along with that bag of tangerines, Mel and I received a gift that will stay with us forever, the residue of kindness. I became educated. I learned about the Posada. Learned the significance of the 7 points on a piñata. And, I learned that a warm cup of ponche on a cold basketball court goes a long way in staving off the ghosts of Christmas.

Wherever you are in the world, I hope you feel loved. I hope you have a warm meal and a soft place to lay your head. My heart breaks for those that don’t.

Think about the ones who are less fortunate as you move through the traffic of life. The simplest gestures have the greatest and longest lasting effect. You can be anything in this world. Why not be kind.

Merry Christmas & happy holidays to all of you. We wish you love, luck, and happiness in the coming year. Thank you so much for being a part of our journey all these years.