It was early September and I was so excited for the first game of the 2016 /2017 NFL season. My Philadelphia Eagles had made some bold moves over the summer and everything was looking up. Then… BAM! Christmas. KA-BLAM-O! New Years. Hello 2017. New England Patriots will face the… Falcons? What-the-what? Is this a joke?

Our anticipated January 20th departure came and went quickly as well, and… we were still on the dock. We’d prepared for so long, then got delayed by a strong front passing through the Tampa / St. Pete area. We’d said goodbye to friends and then proceeded to bump into them the entire weekend while we waited out the weather. I was getting anxious, sad, and second guessing leaving at all. So many great people that we were going to miss dearly. That’s one of the – dare I say – negatives of this lifestyle. Leaving the friends you make when you stay too long, and we made some really amazing friends. Frankly, it made me a little cuckoo if you wanna know the truth.

Having just quit her job, Melody was also a bit nervous, but fired up none-the-less and provisioning like a mad-woman. Amazon’s stock must have risen a few points last week. Like Houdini, she made it all disappear into the many crevices and cubbies aboard our floating tiny house. Vacilando was ready to launch. So on Tuesday, January 24, we pulled off H-Dock and headed out into the glorious Tampa Bay.

Our goal for the afternoon was to reach an anchorage in Snead Island and drop the hook. We were excited to relearn our whole process of being on the move. It was a smooth endeavor. That night was calm as a swimming pool in the cove and it felt so good to be on the hook. We celebrated the entire day with a sip of some lovely tequila from one of many bottles donated to us by our fabulous dock mates. 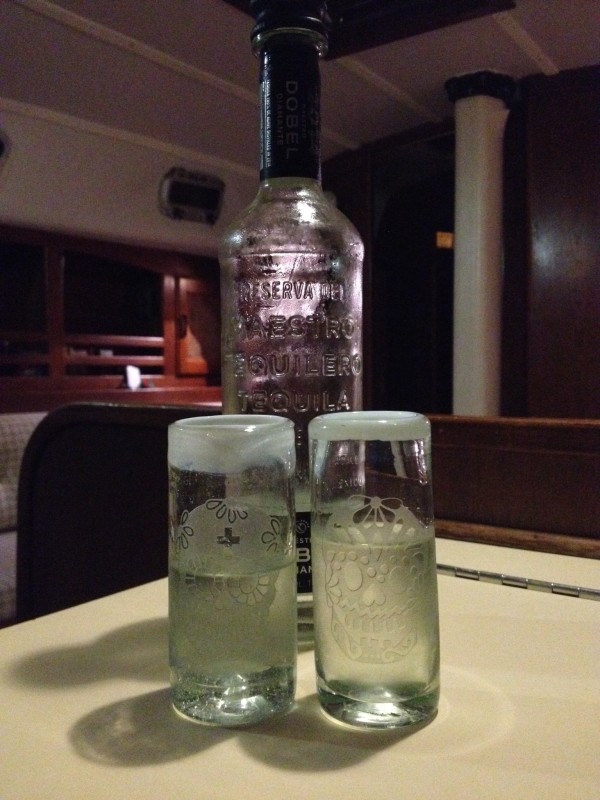 Before turning in, Mel walked Jet to the bow of the boat (just to see what would happen) and uttered the words, “go pee.” Believe it or not, he did! He peed like a racehorse. The next morning we all loaded up in the dink and went ashore for a proper walk and potty break for Jet before shoving off. Old habits kicked in and Jet got in and out of the dinghy like an old pro.

With an appointment to haul the boat in Charlotte Harbor Boat Yard on Friday, January 24th, the plan was to sail offshore to Boca Grande, anchor just inside the inlet in Pelican Bay, a lovely anchorage just off Cayo Costa State Park, and then motor up the harbor to the channel and down to the yard. If you know sailing, you know that plans rarely go off… well… as planned. We ended up on the ICW for the entire 3-day trip down.

I will say, doing the Gulf Coast Intracoastal Waterway was very different than the Atlantic ICW. The shallow and narrow Gulf Coast ICW was challenging in a southerly blow, and parts of Sarasota Bay reminded me of the Alblemarle Sound. Short, square waves smashed us on the nose all day. It was a tedious slog as the wind was south the entire trip. That is until we headed north up Charlotte Harbor. Then it went north.

We grounded three times just getting out of Pelican Bay. That entrance is tricky, tricky, tricky. Three times! That’s almost as many times as we’ve been aground in the last six trips up and down the AICW. No worries. At least its before the bottom job.

In order to get to the boat yard, one has to go through a lock to get to the Interceptor Canal. A hand-operated lock. It’s a nail biter. We ran aground twenty yards away from the entrance. The South Gulf Cove Lock used to be for moving cattle through on small barges. It can’t be more than twenty feet wide and even then, I might be stretching it. We didn’t get any pictures on the way in because we were too busy holding the boat steady. Melody held a bowline with one hand and yanked a rusty old chain that was flimsy enough that it felt like it might break off in the other.

Once through the lock, the canal was very much like the Dismal Swamp. Narrow with a depth of about 6-7 feet. It took us about an hour and a half to reach the boat yard. Sadly, by then the boat yard was closed. No haul-out on Friday as we had hoped.

So here we sit on Sunday. It’s raining, the laundry is done and we’re desperately trying to keep to ourselves and not meet anyone. Word around these parts is, “come in for a week and stay for a year.” Sorry folks. We did that already. We are hauling out, pressure washing, and painting. That’s it. This time… this plan is going to go according to plan. Is that redundant? Either way, Vacilando is happy in some fresh water. Melody is happy in her cozy pj’s. Jet… well, he’s Jet. He’s the king.

Me? I’m good…I’m going to spend some time scampering through the yard and gawk at some boats.