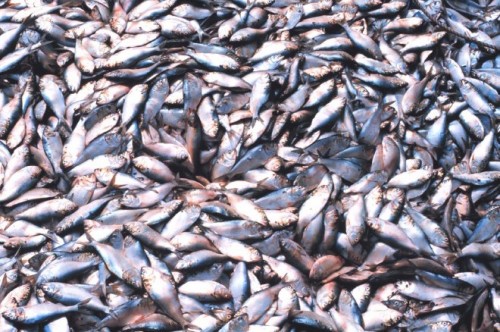 I don’t consider myself a journalist by any means, and most certainly not an investigative journalist. While I do love the investigative spirit that exposes corruption and abuse, I don’t know that I have the patience to sift through all the misinformation nor do I have the gene that keeps me from screaming “BULLSHIT!” in the face of the politicians and industry mouth pieces mid-sentence.

That said, after spending some time in the lovely little town of Reedville, Virginia, Melody and I started asking some questions about the foul-smelling fish plant that dominates the landscape.

The History of the Reedville Fish Plant

Captain Elijah W. Reed arrived in Reedville (of course not yet named that) from Maine in 1874 where Native American Indians had shown the white man how to use a small oily fish called Menhaden as fertilizer.

Reed then developed a method of extracting large quantities of oil from the fish by rendering them by the millions. The oil was then used as a lubricant or in lighting (as whale oil was) and the leftover carcasses and bones were buried for fertilizer.

Cut to today… the Omega Protein owned fish plant is second only to Dutch Harbor, Alaska for the amount of fish processed. They employ somewhere from 250 to 350 workers depending on the season, have 8 modern day fishing boats and 8 spotter aircraft.

Spotter aircraft circle the Chesapeake looking for the large schools of menhaden that swim near the surface. The fish cause disturbances on the water and once they are spotted, the planes radio the fleet who immediately rushes to the area to scoop up the large schools of fish.

The fish are later processed at the plant and used in everything from cat food to cosmetics to the popular Omega-3 fish oil pills many of us take for our health. It’s also added to feed for poultry — Tyson Foods is one of their biggest customers.

Reedville is quite the idyllic town with many of it’s gorgeous homes featured in the historic registry.

Omega is the largest employer in the area and is responsible for a reported $45 million dollars in annual economic benefits to the community. They employ hundreds of people and consider themselves part of the Chesapeake Bay “tradition.”  And that’s where I scream BULLSHIT!

Back in 2006-2007, unemployment numbers in Reedville were 1.5% higher than the national average. However, Omega Corporation spent $770,000 to lobby congress to be able to hire foreign workers.  Yes, 650 (nationwide) to be exact. They were awarded a judgment that enabled them to secure the H2B visas and did so with breakneck speed.

These types of visas are only supposed to awarded when “no local labor is available.”  Seems like some local people could have used those jobs. Not to mention that Omega paid these foreign workers significantly less than their American counterparts.


Since 2002, OSHA (Occupation Safety and Health Administration) has cited Omega for a whopping 63 violations. One man was actually killed when he bled out after being caught in a machine. Very little information was ever provided to accident investigators or the family of the victim. The fine? $79,200. What did Omega pay? $50,000. I’m curious as to that $79,200 dollar assessment on a human life. Why the extra two-hundred bones? Why not an even 80k? But I digress…

In June 2013, Omega was assessed a 7.5-million-dollar fine for dumping ammonia and bacteria (from ship toilets. That’s a nice way of saying raw sewage and cyanide) into Cockrell Creek which feeds directly into the bay from 2008-2010.

Monty Deihl, General Manager of Omega Protein said, “It was not a good time for us here at the plant.”  Huh?  That is the equivalent of saying, “Uh…my bad.” And I can’t stand when someone says that.

The Importance of the Menhaden Fish

Menhaden are tiny bait fish that were once abundant up and down the Atlantic seaboard. They are filter feeders and have the ability to filter a volume of water equal to the entire Chesapeake Bay in less than one day with the potential annually to consume 25% of the nitrogen in the Bay. If you don’t know, nitrogen is not a friend to the bay.

The survival of everything from bluefish to humpback whales depends on the small, oily fish. Eagles, osprey and pelican also need the fish to survive.

In recent years, the menhaden population has declined by — are you sitting down — 90 PERCENT! 90 percent, people. You feel me? When you overfish the main fish that sustains the bay, you kill everything. When the rockfish, striped bass, bluefish and other species don’t have food, they die. Thus, THE BAY DIES!

One local fisherman/scientist did a study over a couple of years and dissected approximately 10,000 striped bass pulled from the lower Chesapeake Bay. The majority of those fish had ZERO body fat and empty stomachs.  Their diet is predominantly menhaden.

The striped bass are starving to death right before our very eyes because Omega Protein Corporation takes a half a billion pounds of menhaden out of the Chesapeake Bay every single year. And they have for decades.

Recently there have been heated debates about putting restrictions on this plant and they’ve all been defeated due to the serious money the lobby throws at the Richmond, VA governing officials. And that is the real issue at hand here.

Do I think this place should be shut down completely? Yes. The real and inexcusable issue here is that Omega won’t even entertain the idea of placing a limit on their catch. They want unobstructed rights to every menhaden in the bay. That’s the crime.

Every other fishing and hunting activity has limits. You can’t kill all the deer you want. You can’t catch all the blue crab you want anymore. If everyone did that, there would be nothing left.

Remember the American Buffalo? Hunted nearly to extinction? The Gray Wolf? That’s what’s quietly happening in Reedville. Some people don’t have a problem with that and personally I think those people are uneducated, unenlightened assholes.

The Atlantic States Marine Fisheries Commission (ASMFC) along with the Coastal Conservation Association of Virginia are fighting hard to implement restrictions and save what’s left. I think they deserve support.  If you live or sail or spend any time on the Chesapeake Bay, you need to get involved in this story.

I’m not anti-fisherman. I’m not anti-corporations (usually). But I am pro-environment and when you have spotter planes and massive ships that suck up every living thing in a huge net, you’re fucking up a place that is not yours to fuck with. What could possibly stand a chance?

The upper bay hasn’t seen a menhaden in years. They can’t make it past the gauntlet that is Reedville. Melody and I saw this firsthand on our trip up the bay. South of Reedville, the surface of the water was abuzz with schools of fish. Once we passed Reedville, nothing.

We saw nothing and we didn’t even realize it until we were sitting at a local watering hole in Solomons, Maryland, a scant 40 miles north of Reedville, and while talking about fishing with a local, the conversation turned to the lack of big fish in the upper bay and ultimately Reedville.

“Nothing survives to make up here any more,” he said. “It’s been devastating to the Bay. Rockfish are now starting to eat the blue crab and all sorts of crazy stuff is happening.”

So there… my soap box. You can read all about it via the links. Fire off some emails, donate some money, share the story or don’t do anything. If you happen to know someone in Reedville or in Richmond, feel free to send them the link to this blog. Everyone has a voice. Everyone has the power to effect change.

Sailors, boaters and travelers can also voice displeasure by not visiting Reedville, VA. Tourist dollars speak volumes and there are other places to go. Other places to anchor and buy fuel.

Maybe a lack of tourists will wake the people of the town up and they will start fighting for the Bay instead of for Omega.  I’m sorry, but 250 jobs (not counting the foreign workers of course) does not quantify destroying the largest estuary on the planet. There is only one Chesapeake Bay.

Bypass Reedville and head for Deltaville. It’s nicer and the air doesn’t make you wanna vomit.