Few things freak me out more than a boat fire. Back in April of 2013, Mel and I were just three boats away from a boat that exploded on our dock in Fort Lauderdale. The owner suffered severe burns over 90% of his body, but escaped along with his wife and young son. All tolled, three boats were burned beyond salvage. Because of that incident, I never dog down the hatches in our v-berth when we go to bed. I try not to think about that day too often, but this past weekend I got a sobering reminder that little things can cause big trouble… quickly.

This past Saturday, Mel and I tossed off the dock lines and went for a much needed sail. Upon returning to the dock, I had to run off to help a friend, so Mel was left with the job of tidying up. As she reconnected our shore power, she discovered a nasty burn on the boat side of our two year old (expensive) plug. This is cord number two, as the first one burned up in Cocoa Village. We later found out there was an issue with their power pedestals.

Where we sit now is a pretty nice place, however, they’ve had some electrical issues on the docks as well. I’m not laying blame to the marina, but in the interest of safety, Mel and I just decided to take a different tack this time, pun intended! After much research, we ordered the SmartPlug 30 Amp connector and inlet kit. 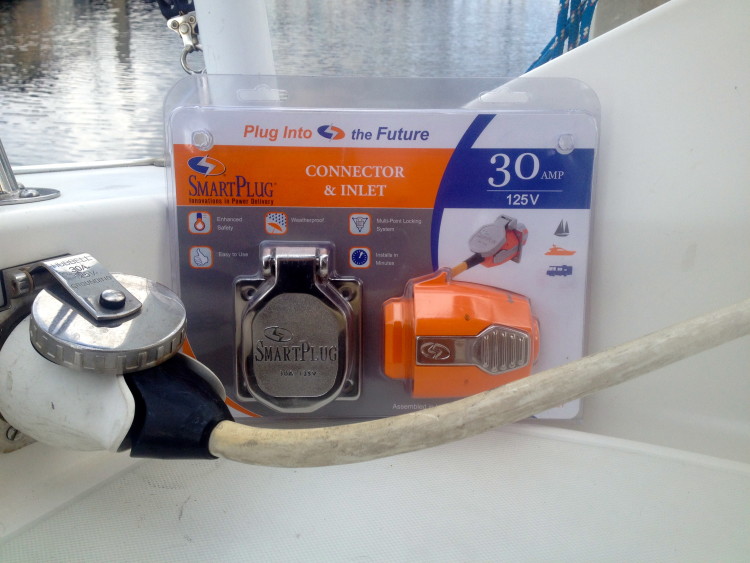 This “smart plug” isn’t cheap at around $175.00, but the best feature of this plug, and the game changer for us is its internal thermostat. In the unlikely event this plug ever starts to overheat, it will shut itself off. Once the plug cools to a safe temperature, it will turn back on. That feature alone makes this plug worth every penny.

Another thing I like is, you can still use your current shore power cord, provided it’s in good shape. You simply cut off the old connector on the boat side, strip the wires and install the new SmartPlug in its place. No sense throwing away a 50 foot cable that is otherwise good just because the plug is bad.

The inlet that accepts the new plug is marine grade stainless and the holes are universal, so it mounts in the existing holes from your old plugs receptacle. You may need to enlarge the hole to accept the new plug, since it’s a bit more square in shape than the circular receptacle you’ll be removing. That’s easily done with a Dremel tool. 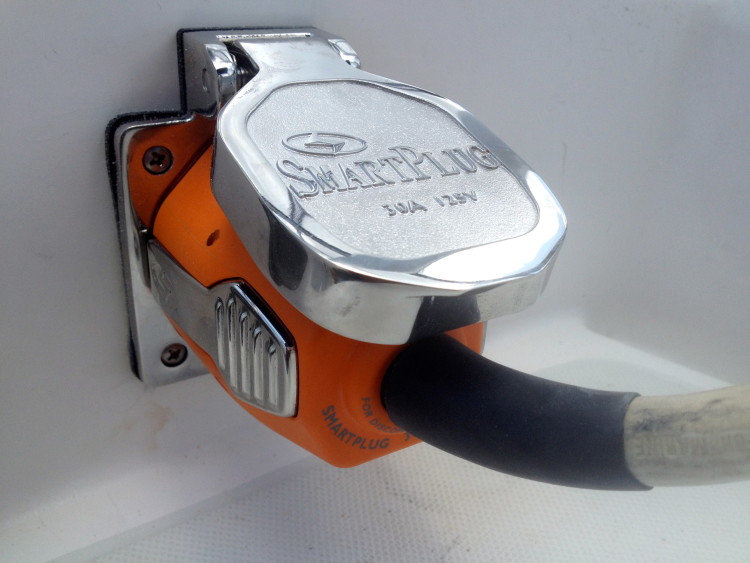 The SmartPlug is designed to push straight into the receptacle with no twisting. It will only go in one way and that means no chance of misaligning anything. Additionally, with this design, the housing takes the weight of the cord and the plug, not the electrical pins. Traditional shore power plugs just never felt like they were in all the way to me. I always felt like I needed to check the connection and support the weight of the plug with bungee cords or sash. This plug feels very secure.

The SmartPlug is a straight forward install. It comes with great instructions and a couple of handy accessories to make the installation even easier. It’s sturdy and feels well built. There are 3 different weather seals on this plug to keep water out. No water, no corrosion. There is a great 4 minute video that details the installation that should take you less than an hour, depending on how difficult it is to access the areas you need to reach on the boat.

Our old cord came with an LED indicator light which illuminated when properly connected. The light  burned out after a few weeks but it was a nice idea. I wish they had an LED on this SmartPlug. If your power goes out at the dock pedestal, it would be nice to see that immediately via the plug. Not a deal breaker though.

A word of caution: The SmartPlug capture screws are made for 10 gauge wire. If you have 8 gauge wire, as we do, it’s going to be a bit of a bear to get the wire into the receptacle cleanly. Be very careful that you DON’T BACK THE SCREWS OUT TOO FAR! They will release from the capture plate and then… you are screwed. It says this plainly in the instructions, but I managed to do it. It was a nightmare to rectify.

With our installation complete, the shop vac fired up on cue. I must have done it right! We’ll be keeping a close eye on our new, fancy plug, and I’ll update in a few months when we actually know a little more about its performance. Until then, I plan to sleep a bit more soundly, although my hatches will remain un-dogged.