I grew up in Philadelphia, Pennsylvania, the youngest of five children born to Italian parents. It’s 1975. The Vietnam war ends; the Dow closes at 858, gas costs an astronomical 44 cents a gallon, and some kid named Bill Gates creates a little company called Microsoft.

I’m a nine-year-old with crud under my nails, ripped Toughskins, and a foul mouth. Things move slower. Nobody has a smartphone, families eat meals together. Food connects us.

I can remember how my cousins and I spent many a Sunday afternoon at my grandmother’s West Philly row house watching the Eagles play. Pots taller than me bubbled away on her pink porcelain stove. If you’ve never bathed in the aroma of home-grown tomatoes reducing in red wine, garlic, onion, and oregano, you haven’t lived.

Constance made everything from scratch and picked most of the veggies from her modest garden. She used both veal and pork in her meatballs, soaking day-old bread in whole milk before mashing it into the meat with her crooked hands.

My grandmother has long since passed. Things…life…moves at a rapid clip, which is starkly juxtaposed against my current existence. I live on a sailboat with my wife and our dog. To give you an idea, it takes us a full day of sailing to cover the distance most vehicles cover in one hour.

For the last six years, I’ve felt how a bubble might feel (if bubbles had feelings) floating through Manhattan. It can be difficult to keep up. If there’s no wifi, I’m off the grid. No email, no Facebook, no texts. It’s wonderful.

At the current moment, I am connected. We’re taking a break from sea life and have landed in Guatemala. Antigua, Guatemala to be exact. And this is where the story begins.

A few weeks ago, Mel and I strolled the cobblestone streets on a chilly, moonlit night. Neither of us knew where we were going, but neither one of us wanted to go home. We wandered by a place a few blocks from our apartment and decided…check that. We didn’t decide anything, the place pulled us in. We didn’t have a choice.

Once inside, I knew I had found the coolest restaurant on the planet.

It’s the tiniest restaurant on the quietest street, far away from the main square. If you blink, you could miss it.

There are no windows. There’s barely a kitchen. Some people see it and walk right on by. Some might stick their head in the door and say, “What the hell is this place?” Some might not dig the Robert Johnson or Chet Baker wafting from crackling speakers.

The graffitied walls might scare others. Names, countries of origin, poems, and plain gibberish cover the place from floor to ceiling. It’s not for everyone…and that’s just fine. Because what makes this place so special is that it’s just right for just the right people.

I like to think of it as the “Goldilocks” of restaurants.

Por Que No began six years ago quite accidentally, when a young couple, deciding they didn’t want to raise their daughter within the madness of Guatemala City, moved an hour west to the city of Antigua. In their new city, they struggled to make enough money to make ends meet.

One day while walking through the neighborhood discussing their dwindling savings, Carlos and his wife, Carolina stumbled upon a small vacant building.

“I was standing there with tears running down my face and Carlos says, “let’s open a restaurant. Right here.” Carolina laughs as she recounts the details. “I said, honey… You don’t cook. We have no idea how to open a restaurant. He knocked on the door and after speaking to the owner of the building for a few minutes, rented the place on the spot. We immediately started cleaning.” 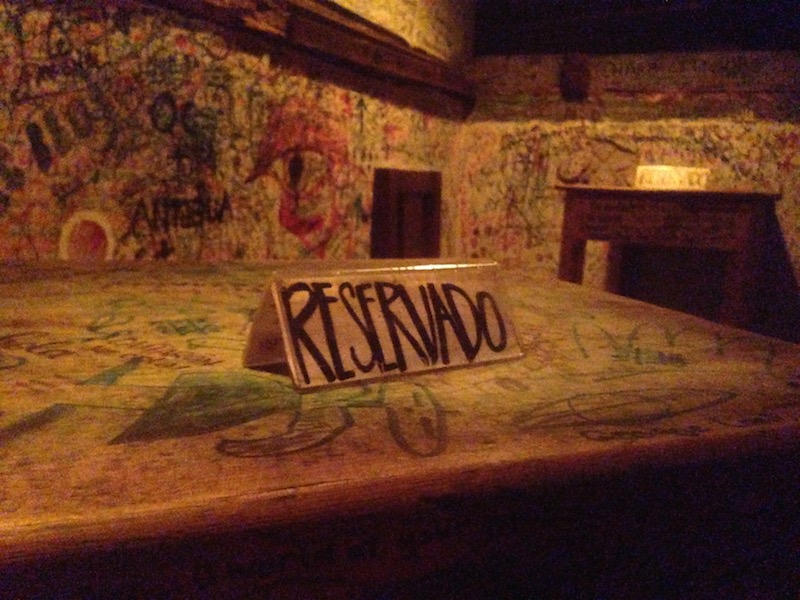 Por Que’ No is…compact. The main floor is about 1o’ x 10′. Upstairs in a small loft, you’ll find six tables, each one bearing the scars from the conversations of movers, shakers, lovers, and leavers. The “staircase” leading to the loft is so steep, a rope runs the length of it so you can pull yourself up. If you arrive early, you’ll be rewarded with one of four bar stools and oh, if you’re looking for a sign, forget it. When they opened they couldn’t afford the permit for one. There’s still no sign. Just an old weathered chessboard nailed to the wall above the door.

The food is fantastic, but it’s only part of the appeal. And that’s what got me thinking about all of this in the first place. Yes, it starts with the food. It has to. But, everything about Por Que No seems to be about drawing people together rather than focusing on the individual dining experience.

Sometimes the line stretches around the building, but nobody gets upset. When Carolina apologizes, patrons say, “It’s cool. We’ll wait.”

And wait they do because it’s worth it.

Carlos cooks five feet from the bar over open blue flames, and there are no plans to expand. I could go on and on about the love and attention to detail Carlos bestows upon the tenderloin or curry camarones, but it would fill volumes.

Honestly, the aromas shooting through the air on a heavenly cloud of combustion has to be experienced in the flesh. You have to feel the steam on your face when he hits the pan with a blast of water or cream for the reduction. You can’t focus on one aspect of Por Que No without including the others, just like you can’t focus on one single string on a guitar.

In an age where a single scallop, centered on a 14-inch plate, grazed by a molecule of wasabi mayo, and garnished with a feather cut from virgin kale masquerades as a meal, places like Por Que No are more valuable than ever.

As far as I’m concerned, you can keep your slick 3000-square-foot Manhattan restaurant that charges $24 dollars for a martini. Keep their 6000-bottle wine cellar and their ‘82 Lafite Rothschild.

For me, food isn’t fashion and fashion isn’t food.

Por Que No isn’t just a restaurant, it’s a tiny little window to your soul. It’s not for everyone. And thank God for that.

The news is getting out. Travel magazines, bloggers, and foodies from all over the world are now seeking out this magical little place. And, I have always said, when a restaurant or bar starts printing hats and shirts, it’s over. But… I may have to change my position on that.

If you go, make a reservation. Dispense with any notion that you’ll be popping in for a “quick bite.” If there’s a line, you’ll have to wait.

Carlos won’t rush to turn tables over. His food is his handshake. The ever charming Carolina will keep you entertained with her amazing personality and Nalo will pour you a lovely Carménère if you like.

But you’re still going to have to wait. 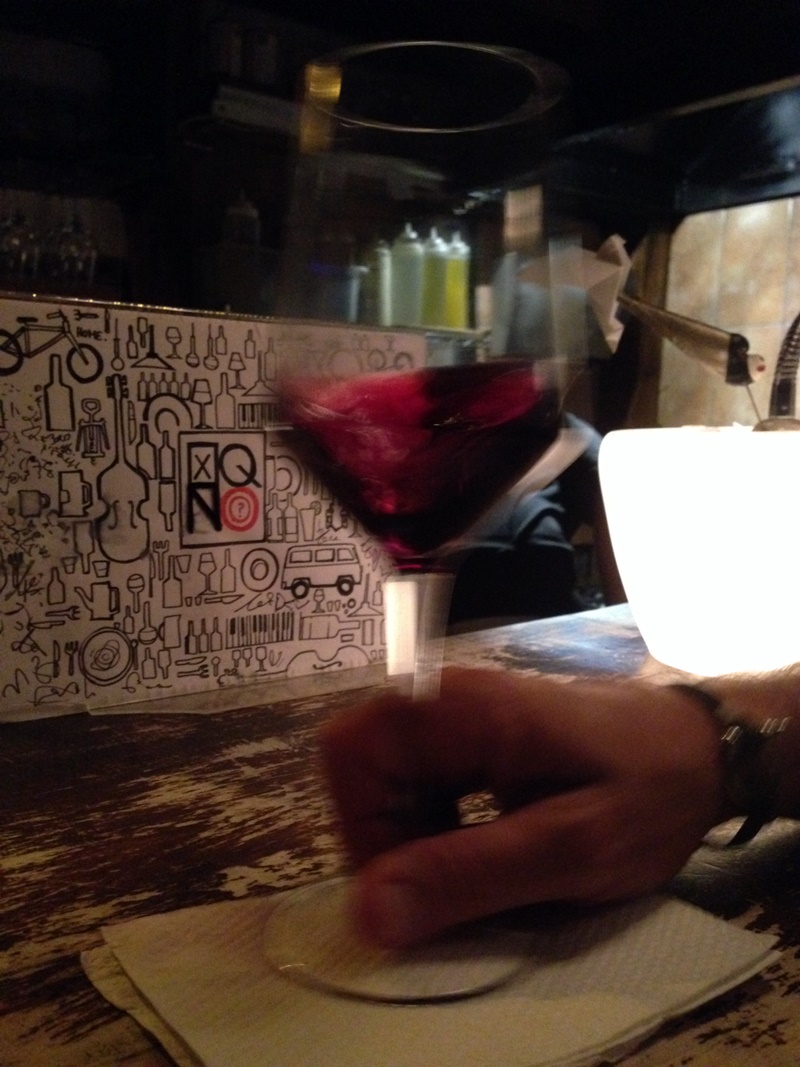 Lest we forget, our diners, pubs, and funky neighborhood joints are our identity. They tell the story of who we are. Where we came from. When a stranger wanders in, they do so with the hope of discovering something new about themselves and their surroundings.

Even at our most nationalistic, if we’re honest with ourselves, we’ll realize we are a community of wanderers from the farthest reaches of the planet who’ve decided to mash our crooked little hands into the meat.