To pick up where we left off, the boat (that’s what she’s called so far) arrived in Nashville and the family departed Nashville.  After a short stint in re-hab (joke) I’m back to normal and ready to get out to the lake and rig up the boat for a Nashville maiden voyage.  We invite some friends who lovingly helped bend on the sails and supplied the alcohol. Everyone knows you can’t hang out on or near a boat without booze.  And after a family visit and the hatch drama, alcohol was a welcome deck hand.

So now we sail.  And we sailed a lot the summer of ’07.  My friend Jeremy Greer, photographer, furniture designer extraordinaire and fellow sailor took hundreds of photos. But you’ll have to imagine them because he never SHOWS THEM TO ANYONE!  But you can go to jeremygreer.com to see his other amazing stuff. You will be blown away… I promise.  Just don’t expect to see any of the photos that I’ve been begging and pleading for in order to make my blog cohesive. You know, those photos that would tell this story perfectly and in such detail that you’d all be captivated and encouraged to come back and read more. No.  You won’t see those photos.  You won’t see the photos of the winter sail we did in 25 degree weather where we took a knock down and when we righted, a small minnow was frozen to the metal of the rail… nope. You won’t see those. Don’t ask.  You won’t see the photos from the day we sailed with Matt’s dad (you don’t know Matt yet) in 30 to 40 mph winds and 2 -3 foot waves on an inland lake, making 7 knots at one point. Nor will you see the pleasant, calm and near perfect night we all motored out in twilight enjoying some Miller High Life… it’s the Champaign of beers you know.  Jeremy took pictures of all of that.  They are beautiful because I saw them once… once.  On the small 2.5 inch LCD screen of his Cannon 7D, D7, 5D… whatever the freaking thing is. But alas… My “friend” Jeremy’s grasp on those photos is so tight if you put a chunk of coal in his palm you’d have a diamond in two weeks. I do love my friend Jeremy… the one at www.jeremygreer.com. You know, one could possibly send an email via that site requesting… gasp! No, that would be inhumane to suggest such a thing.

Ok… enough Shakespearean bullshit.  My friend Jeremy is a turd. So you’re going to have to go back to when you were a child and use your “imagination”. WHAT! Dare I say… damn you mouth… Imagination… Oh… the horror.  Anyway… we sailed a lot. Me, Jeremy and Matt Behnke of “The Behnke’s” fame. Singer / songwriter and woodworker extraordinaire. Yes I hung out with a lot of extraordinaire’s  what of it.
(I’m losing focus… can you feel it?)

Then one day, it happened.  Matt and Jenny, his wife, singer / songwriter and 2nd half of the Behnke’s… decided to move. Leave Nashville.  Leave me. They sold their gorgeous 1961 Swiftsure and moved to Oregon.  Then… it happened.  Jeremy and his lovely wife Sarah decided to move! WTF!  Where is everyone going?!  They sold their Tanzer 25 and moved to New Hampshire.  Me and the girl were left behind.  There was only one thing left to do. 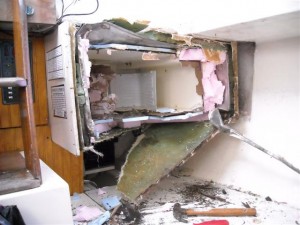 Remodel. If I didn’t have my sailing buddies, what fun was sailing?  I had done some ocean trips with another friend and now my little inland lake held no allure.  The luster had worn off.  The endless shifting winds and red-neck speed boats held no charm.  I mean one can only take so many drunk red-neck girls flashing you from a jet-ski before it becomes “old hat”.  It was time for something new.  Time to tear out the old leaky icebox. Oh boy.  If I had only stopped there.

*Note:  I love my friend Jeremy.  I just felt like busting his balls a little.  You should indeed see his website.