In 1960 an older John Steinbeck felt disenchanted with and disconnected from the country he loved so much. He’d attained major success at this point and although the vagabond spirit still welled within him he, along with the decade, was approaching the 60’s.  He was living in Sag Harbor, NY and although it was home, it was a long way away from Monterey, California where he grew up.  So.. being John, he grew a beard, let his hair grow and decided it was time to travel this land and rediscover America.  He had GMC build him a “state of the art” pick up truck with a slide in camper for the back and in Rocinante (the name Don Quixote gave his horse), he and his standard poodle Charley (the mind reading dog) headed out in search of… America. 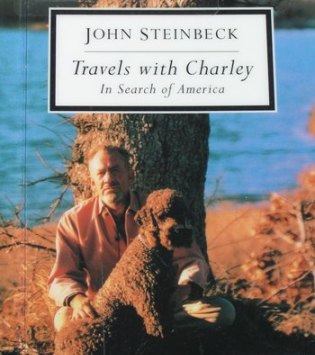 If you’ve never read “Travels with Charley” you owe it to yourself to do so.  It’s only about 200 pages and within the first 5 pages, he tells the story of Hurricane Donna hitting their bay and the struggle he had saving his precious 22 foot sailboat “Fayre Eleyne,” named after his wife Elaine.  You’ll not read anything like it this I promise. Now… let me post my disclaimer:  If you read Cosmo, GQ or romance novels featuring men with names like Dirk and Leo, you should stop reading now.  If you think “Sex in the City” is on par with “War and Peace” and care more about Gucci than you do about Guinness, you should stop reading now.  In fact, if either of those two types are you… you in the wrong, f’ing place altogether!

Actually, I’ve probably read this book about 5 times.  I have a copy in my truck, one in my every day computer bag and one in my back pack that I fly with. I give them away regularly and if I’m ever stuck in traffic, waiting for someone or in the airport, I pull it out, open to any page and immerse myself for as long as I have.  It’s so poignant and relevant, it could have been written yesterday.

“Having too many THINGS,” he says, “[Americans] spend their hours and money on the couch searching for a soul. A strange species we are. We can stand anything God and Nature throw at us save only plenty. If I wanted to destroy a nation, I would give it too much and I would have it on it’s knees, miserable, greedy and sick.”

Steinbeck argued that the trashing of America was suicidal; he urged restraint and conservation of natural resources.  He considered the wastefulness he saw everywhere around him and lack of caring for the environment as part of a greater malaise that seemed to have overwhelmed America.

Now… you must be asking yourself at this point, “what in the hell is he talking about?”  Why all this crap about Steinbeck in a blog about a boat.  Well, if you don’t recognize and identify with the passage I’ve posted above… stop reading now.  You’ll never identify with anything I write.  For today, I feel as disenchanted and disconnected as he probably did.  I bump into people on a daily basis staring into the palm of their hands; their “devices” that “make our lives easier.” Email, cell phones, texting, twitter… whatever… all these gadgets designed to “help us communicate” are stripping away the essence and creating huge interstates of space between us.

The “Moose” is my Rocinante and sailing is the reason for all the crap about Steinbeck.  There is no gadget developed yet, that can sail a boat in choppy seas and high wind.  Sure you got auto pilots and wind vanes… don’t argue semantics… because if there isn’t a human soul on board willing to brave the motion, the sea spray and chill, there is no auto pilot.  And every good sailor knows… auto pilots fail and windvane’s break. Then what.  A hand on tiller is all that prevents the broach.

So, do yourself a favor and grab a worn out copy of “Travels with Charley” and put down your freaking “smart” phone.  Turn off the Bachelor, Jersey shore, Biggest loser (which could quite possibly be you) and READ.  Breathe it all in. You’ll do yourself and quite possibly some of us a favor.  If you get offended by my last statement… you should have stopped reading a long time ago.

“When I was very young and the urge to be someplace else was on me, I was assured by mature people that maturity would cure this itch. When years described me as mature, the remedy prescribed was middle age.  In middle age I was assured that greater age would calm my fever and now that I am fifty-eight perhaps senility will do the job. Nothing has worked… once a bum always a bum. I set this matter down not to instruct others but to inform myself.”