Wow. That’s all I can say about the trip through the state of Florida. Literally right through the state via the Okeechobee Waterway. Along with the Erie Canal, The Amazon, and maybe the Mississippi, it’s a trip I’ve always wanted to do. We sailed V around the Keys to the Chesapeake when we first bought her so this time we thought we’d try something different to get from one Florida coast to the other, and this trip was just that.

Now… if you ask boaters about “river trips,” i.e. the Intracoastal, the Erie Canal or the Okeechobee, you’re likely to get one of two responses. I hate them or I love them. I know for us aboard Vacilando, the ICW has grown a bit tiresome but that’s after several trips both up and down the waterway. I’m thankful it’s there and dig the natural beauty,  the wildlife, restaurants and neat folks but don’t dig the three foot depths, eleven-foot tidal ranges or four knot currents in and around Georgia. Sorry Georgia.

I’m a professed Mark Twain guy and love the Adventures of Huck Finn and Tom Sawyer so I can fall right into river mode with little effort. I have no trouble traveling at 6 knots all day and checking out the bald eagles and gators through binoculars.

Some concerns preventing many from considering the Okeechobee are depths at the lake and the infamous Port Mayaca railroad bridge. There are several great resources for information on the waterway, locks, water levels and any restrictions that might be in place.

There is so much written and said about the Okeechobee that it can definitely be daunting and confusing. Luckily our friends Matt and Jessica had recently done the trip through and provided us some detailed intel when we saw them in Indiantown. 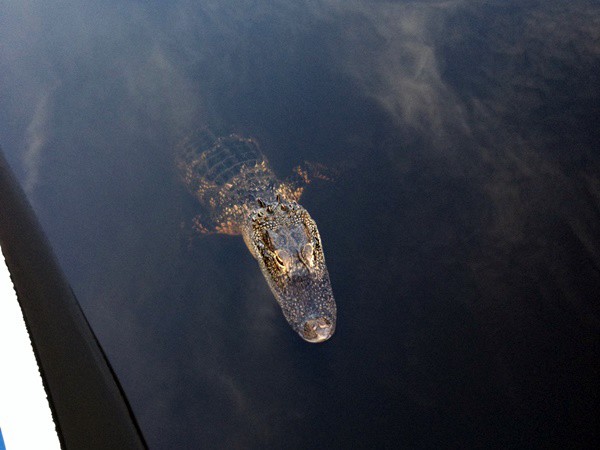 Let me first address the depth issue. When we transited the lake, we saw nothing less than ten feet, but the water was about a foot and a half higher than normal. I would not test the depths by straying outside the marked passage though. We did opt for route 1 vs. route 2 (the outer edge 0f the lake) due to even less depth around the rim. Plus, we like to sail and we did pull the jib to make the transit that much quicker. 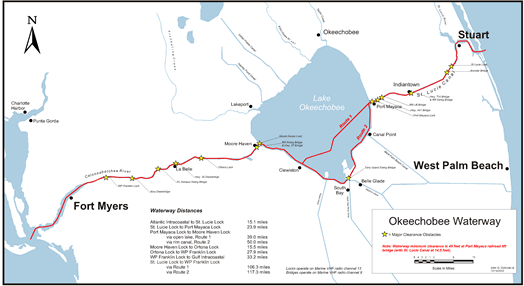 This lake is wide open and weather planning is crucial! I would not want to be out there in a  strong blow with any component from the north. Fetch would be nasty and with little wiggle room I bet terrifying to say the least.

Now… the infamous bridge. The Port Mayaca lift bridge is said to have a 49 foot clearance. There are no boards or indicators anywhere on the bridge. When we went through, Billy (aka Billy the Boat Tipper) said with all the rain it might be more like 47 or 48. Great. 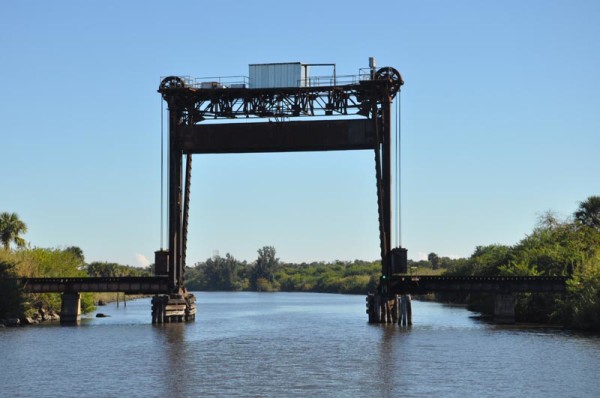 Billy is the guy who has been getting people under this bridge for years. His phone number is in the Waterway Guide Southern Edition and the folks at Indiantown Marina can also hook you up. He asks that you give him a week or so notice if you’re gonna need him and while I won’t post his number here publicly, if you can’t find it through the places I just suggested, email me and I’ll send it to you. Most people know they’ll be going through the bridge so I would say, call him early, make a plan and then stop in to Indiantown Marina and stay the night but please don’t feed the gators!

The transit from the marina to the bridge takes about an hour and a half at 5.5 – 6 knots. We left Indiantown Marina at 7 am and hit the bridge around 8:30. 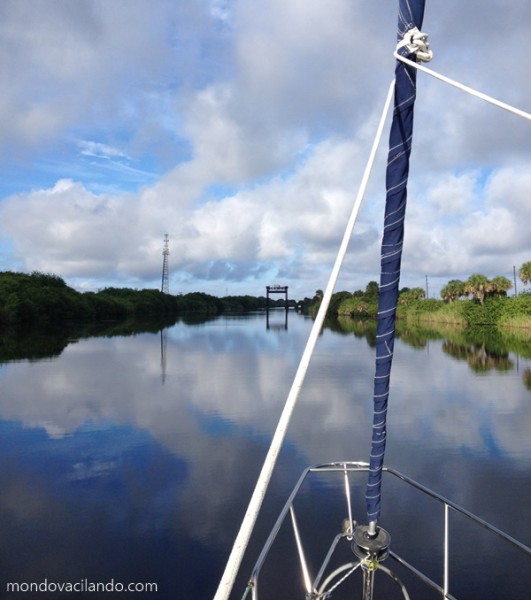 Billy was a sweetheart of a guy and the whole process took about an hour and a half from start to finish. It works like this. Billy and his pal arrive in a skiff and side-tie to your boat. They load a bunch of plastic 55 gallon drums on the side deck of your boat. You’ll need a long line to run from a cleat on the foredeck back to a winch. This secures the weight of the drums and keeps them off your lifelines. Next they have a line that measures 49 feet (including a stick that extends over your instruments) and has weights at the bottom. They hoist it using your main halyard.

They then fire up a large pump on their skiff which fills those drums quickly. As the drums fill, the boat heels. As the boat heels, the weights at the end of that line you hoisted get closer to the water. When the weights are in the water, you’re clear to go. It took seven… yes seven 55 gallon drums plus the weight of Billy, Melody and his pal to get us over. That’s a lot of weight. 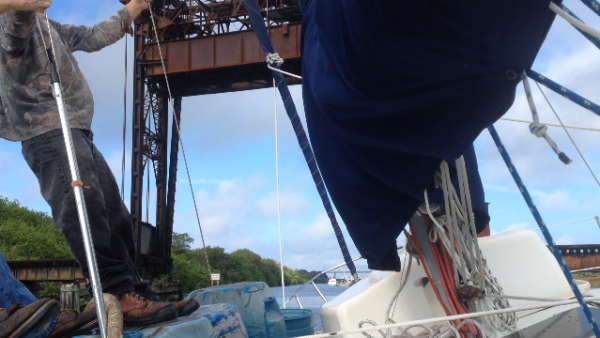 There isn’t much horizontal clearance in there either, so it’s a bit nerve wracking. We heeled to port and I was worried that our engine intake would be out of the water but Billy assured me we weren’t going “that far over.” I would have liked to heel to starboard but I trusted him, and everything was fine in the end. I will say, we were holding our breath as the delicate pings and scrapes of our VHF antenna played her song against the rusty, metal girders. Billy just said, “You’re making music!” Check out the video below!

All said, it was an awesome experience. The trip from the turn-off of the ICW through Stuart and to Indiantown is pleasant. The lock operators are incredible and the process is made even easier because when you enter the locks, they have lines dangling from the lip every five to ten feet. You just pull your boat in, grab a line and hold on. No need to toss lines up, or wrestle with all of that stuff. When the water level is where it needs to be, you let go the line and pull out. Done!

John, the lock tender in the Port Mayaca lock just passed the bridge, yelled down to Melody, “Can you catch?!” She said, “Yes,” a bit puzzled at the inquest. A second later a trash bag comes hurling down to the deck… cause she didn’t catch it. It contained several popsicles and two huge dog biscuits! He said, “anyone with a four legged deck hand is alright in my book!” I’m assuming he meant Jet… but then again, maybe he counted as well as Melody catches. 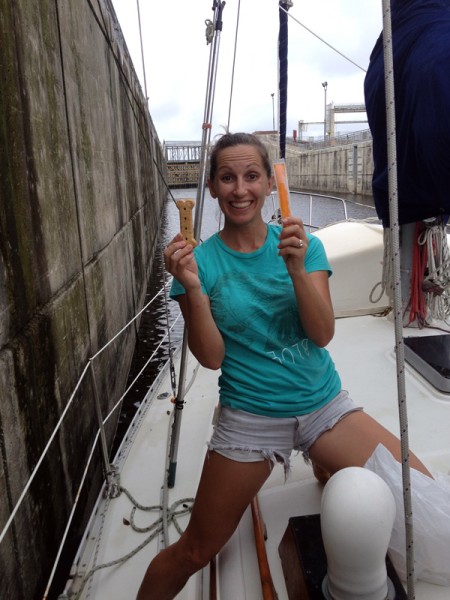 River trips are tedious and require you to be at your best with your boat handling and navigation. They might test your patience sometimes with rude boaters who pass too closely, too quickly or both, and it’s not quite as relaxing as getting out the inlet, hoisting sail and killing the engine. But… chances are you’ll see cool little towns, eat great food and meet seriously unique characters who you’ll remember for years to come. And that’s why we travel this way, isn’t it? To experience new stuff? I mean how many times can you eat a steak at Coinjock for crying out loud!

But I’ll say this, our boat makes these trips pretty stress free. She has a fabulous old engine that we dote over and maintain like crazy. It’s powerful and stingy on diesel, burning only a little more than .57 gallons per hour.

She’s comfy and her mast height is 53 feet including the VHF antenna. How do I know this? I know this because we measured it with a newly purchased 75′ tape. All the hubbub and misinformation regarding the Cape Coral Bridge on the west side of the Okeechobee had us freaking out for days, worried that we might get all the way over there and then not be able to get under (since there’s no bridge tipper there). Can you imagine?!

If you read all the forums you’ll get tons of yabba-dabba-doos on who’s been there and what they saw or felt and then you’ll get the people who say, “Well I don’t know about the Cape Coral Bridge but we touched going through the bridge in Miami!” WHAT?! We aren’t talking about Miami! Ahhhh… don’t get me started about the forums.

Anyway… the Cape Coral Bridge was fine. When we arrived we saw fifty-four and a half feet. Not the reported fifty-three feet. In fact, look at the bridge boards in the photo please. That sign has no algae growth around the 53′ mark and I’d be hard-pressed to believe it’s ever seen the water. BUT… we did pass under at dead low tide and didn’t even scrape our VHF antenna. So if you wanna do the Okeechobee and have heard tales of disaster regarding the legendary Cape Coral Bridge, fear not. Plan ahead and hit at low-tide. Wait… Don’t hit anything. Transit at low tide I should say. Now… if you have a 55 foot mast, don’t crash that thing into the bridge and then say I told you it was fine. Common sense is required both on this blog and on the water. (That’s my legal disclaimer.)