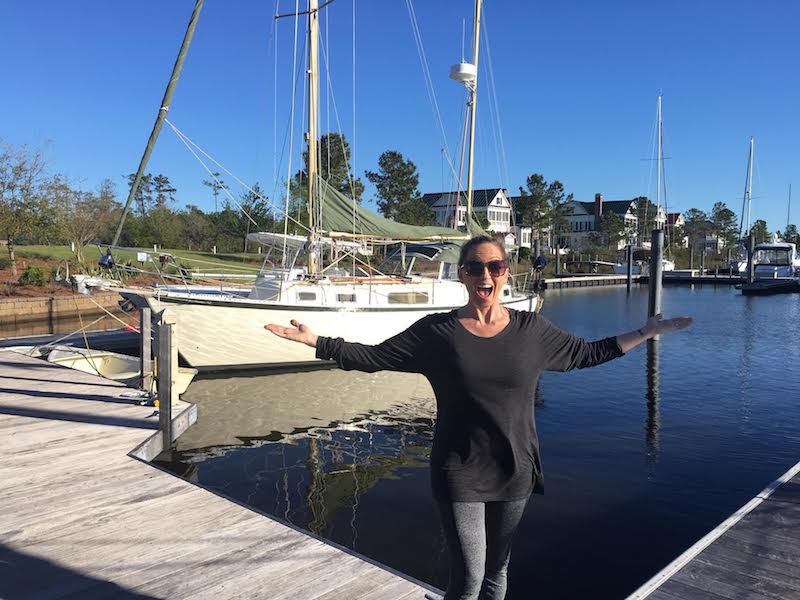 At this point, Melody and I should know if we utter the phrase let’s just rent an apartment for a while and regroup, things are about to get hairy. We said it when we sold the boat in Guatemala (2017). Our little band of nomads ended up meandering through Central America and Mexico for nearly two-years. We dared to say it again upon our return to the states in January and now, our tribe finds itself back on a boat in southern Maryland.

Here’s the Readers Digest version. When we got back in January, we agreed to house sit for my brother. He was going to be gone for a month and needed someone to watch his house and his dog in Shamong, New Jersey. We thought it’d be a great way to ease back into life here in the states. We’d have some time to decide where we wanted to be and find the right place.

To be honest, living the way we’d been living for almost seven years had become a bit tiresome. Yes, it’s incredibly awesome living on a boat and it was great to get off the boat and travel by land as well. But, it gets tiring. The communication barrier makes every errand take longer. Traveling with Jet isn’t as easy as renting a car and just going. There’s paperwork, international health certificates, shots, exams, and more shots. Even though we didn’t want to admit it, when we got back to the states, Melody and I were glad to have some easy in our lives.

That lasted about a week. 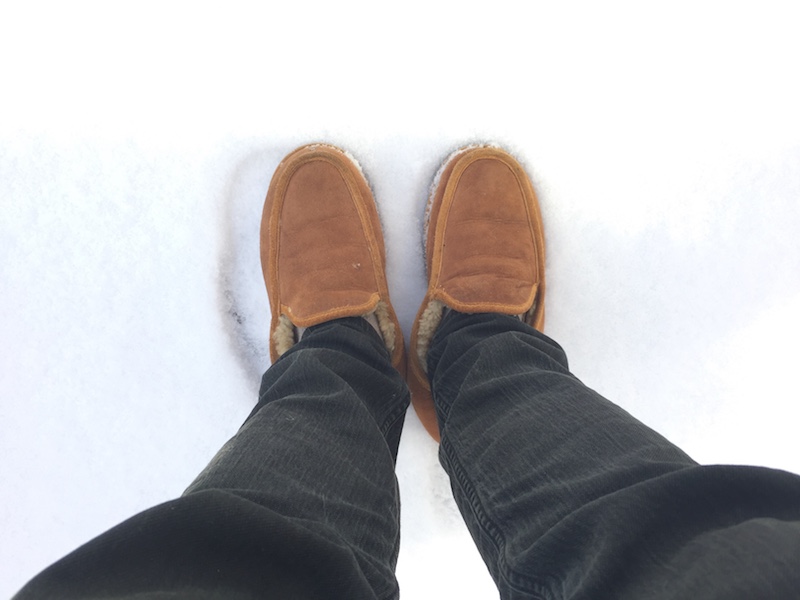 Gray days, snow and blistering cold, traffic, and high prices made us miss Mexico rather quickly. My brother’s 3500 square foot house felt cavernous and smothering all at the same time. We found the supermarkets overwhelming and shockingly expensive. But we were home and happy to see family and friends. Happy to reconnect.

We decided when my brother returned, we’d head back to St. Pete, Florida where we spent 18 months prior to our departure in 2016. We really loved the city. So, we started looking for apartments. We got excited about having our own space adorned with the artwork we’d collected. We envisioned a small office space where Mel could actually have conference calls in private and feel like she had a place of her own. We fantasized about movie nights on a big cushy couch with Jet sprawled out on a soft dog bed, all his own. 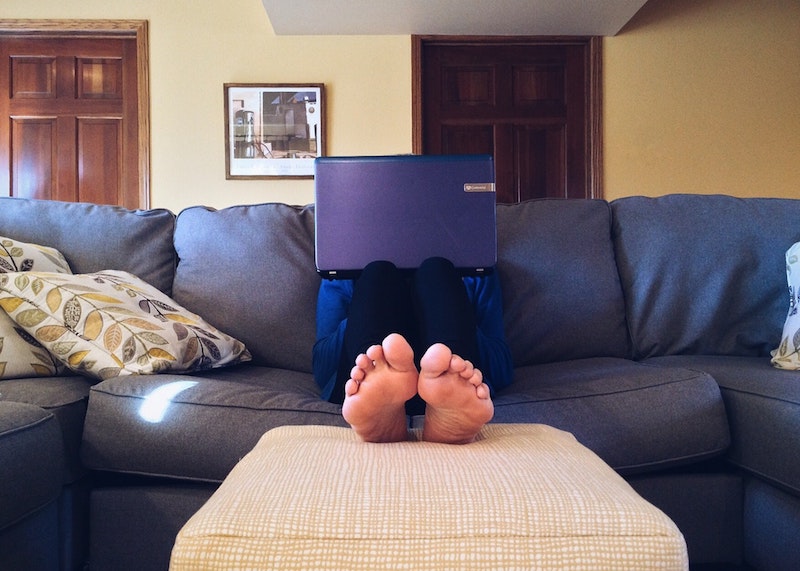 We found some cool places in our budget and then… we began to crunch the numbers. That’s when reality hit. First and last month for deposit. $1,000 – $1,500 per month rent. Wifi plan. Electricity. Furniture. Pots, pans, plates, and cutlery. A couch. A desk. A bed. We’d have to buy a car and that means insurance.

See…we had nothing. We sold it all when we moved aboard in 2012. We were starting all over. After a bit of discussion, we realized that when all was said and done, at the end of one year renting, we’d spend almost $20,000 to live in a place we didn’t own. What if we didn’t like it? We’d have to move again!

The gray days didn’t help. The fact that I was wearing snow boots for the first time in nearly a decade made matters worse. Mel and I had a few heart-to-heart discussions and each of us was afraid to admit that the one thing we both wanted was to be back on a boat. But, living on a boat with our old, blind dog seemed like a less-than-ideal situation. We were worried he would have a difficult time moving around. After a lot of soul searching, we decided to use our savings to buy another boat. We wanted to live in a paid-for for space.

Once we made the decision, we had about two weeks to find something. My brother would be returning at the end of February and we wanted to have our own space if possible.

We began scouring sailboatlistings.com for boats within our budget and made a couple of quick trips to see candidates that weren’t quite right. At the very same time, I sent an email to a guy we’d met in the boatyard just before we left in 2016. He had an old Hallberg-Rassy and mentioned he might be selling her in a year or two. 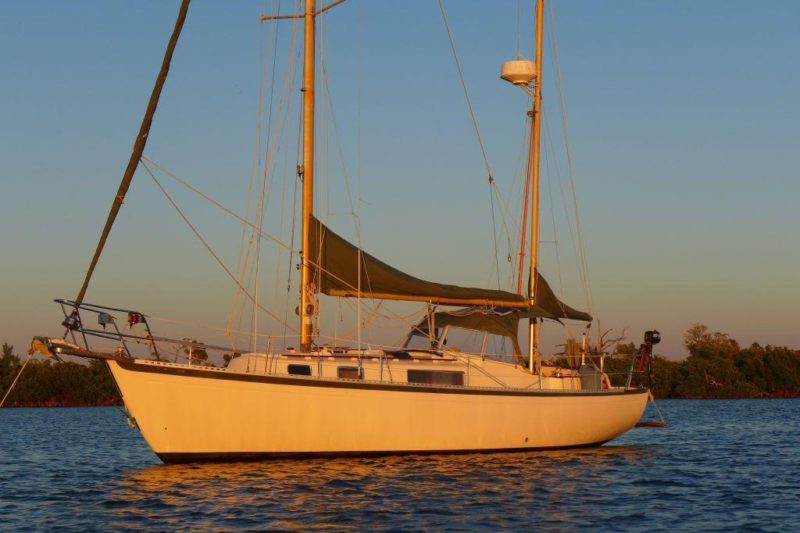 One night while browsing, I saw the listing for her. The price was out of our range, but I thought I’d offer him what we had. I told him if it was something he could accept, we could make the deal happen by the end of the week. He accepted! Melody found me a flight out that weekend. It was a furious two weeks of money transfers, surveys, and cautious optimism. Then, on February 19, we closed on the sale. The next morning, I left Port Charlotte and headed for the Chesapeake Bay.

This is how our life works. We make a plan and the plan changes. In a recent interview with Marilyn Ball for her show, Speaking of Travel, she asked me if Melody and I find everything easier now after doing it for so many years. I remember saying that I wouldn’t use the word easy.  Change is never easy, but we have gotten better at adjusting when changes come. It takes less time to collect ourselves and we don’t panic anymore.

Right now, things have settled. We are in full-on work mode and enjoying the Chesapeake Bay. It’s time to make hay. We aren’t going to cruise with Jet. It’s too hard on the old man. He’s enjoying the green grass and tall pines. We did, however, purchase a car! Stay tuned for details on our new Adventure Pod!

Editors Note: You should know by now that it’s nowhere close to new

Rock on, my friends!