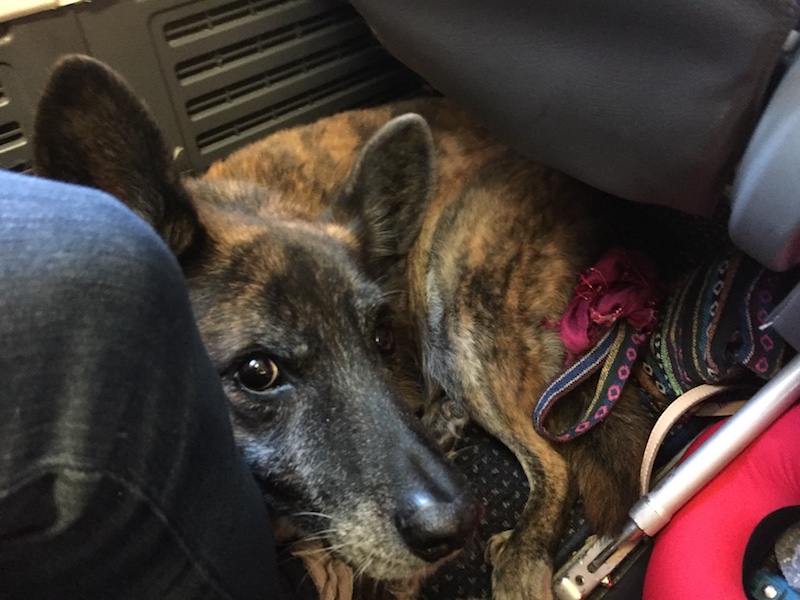 Your International flight leaves at 6 am and you have to be at the airport two hours earlier. That means a departure from your hotel at 3:30 am. When you arrive at the airport, you find only customs and security agents. Every concession stand is dark. That means no coffee. Still, in spite of this, you remain chipper. You greet your boarding agents and make it to your seat. To your amazement, there’s an open overhead bin. Karma. Kismet. Whatever it is doesn’t matter. Everything’s gonna be just fine.

Enter a woman carrying a whaling toddler, coughing his little lungs out. Snot seeping from both nostrils like sap from a sugar maple in late May. You spy her anxiety-ridden eyes tracing the seat numbers, hoping, no- hope isn’t strong enough. You begin praying that she’ll continue to stroll past and locate a seat well aft of you. Suddenly, your eyes meet. She smiles that tight-lipped smile to confirm your worst fear; she and her darling little bag of screams are in the seat next to you. We’ve all been there, right? What could possibly be worse? 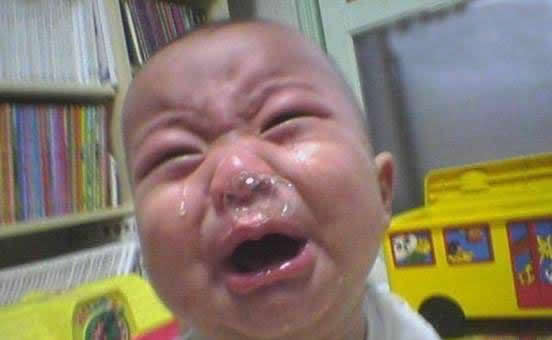 I’ll tell you what could be worse; a dog. Sitting next to a yippy chihuahua the size of a bagel with an attitude the size of Mickey Rourke. One has to wonder what someone who flies with a dog has to be thinking. Well, allow me to tell you what that person is thinking. You see, Melody and I just found out first hand what it must be like to fly with a dog. A big dog. Our dog.

After 16 months of working our way through Guatemala and Mexico with our 50 lb. dog Jet, we needed to get back to the states for a long overdue visit with family and friends. All along, we’d been dreading the thought of flying with Jet. We could never entertain the thought of crating him and putting him in with the cargo. He’s 12 years old and after reading the recent horror stories about the mishandling of dogs on airplanes, we said we’d never do it. Ever. That left us with a few options.

Buy a car and drive back: We toyed with the idea of me flying back to the states, buying a cheap vehicle and then driving it back to Mexico. Doing this would solve two things. It would allow us to drive ourselves without having to hire expensive shuttles or do equally expensive one-way rentals. But there was a problem. Several actually.

The main one being, we didn’t want to own another car. We’d been living for two years without one and it’s been awesome. No insurance. No maintenance. And no gas. We’re healthier for it. We’ve been walking or biking everywhere. It’s been fantastic.

The second issue was crossing the border. Unless you’ve been living under a rock, you’re aware of that imaginary crisis at our southern border. Even though there is nothing really happening there, we didn’t feel like taking the chance of getting caught up in a border fiasco. We imagined that crossing into the states with a dog and car would send up red flags and keep us detained for hours while the powers that be verified all of our paperwork.

Take a bus: This option never really gained any traction. While the buses and bus system in Mexico is incredibly predictable and downright luxurious, they would require Jet to ride in a crate in the luggage bay below. Our fear was that the poor guy wouldn’t live through the 16-hour journey.

Private Shuttle: While this one might have worked, it would have been prohibitively expensive. We didn’t even get to the point of researching it. Finding a driver to take us, a dog,  and all of our stuff almost a thousand miles would be near impossible, not to mention them not being able to cross the border. Can you picture it? Me, Mel, Jet and our stuff standing on the side of the road just south of the Laredo border. Ah, the glamour. 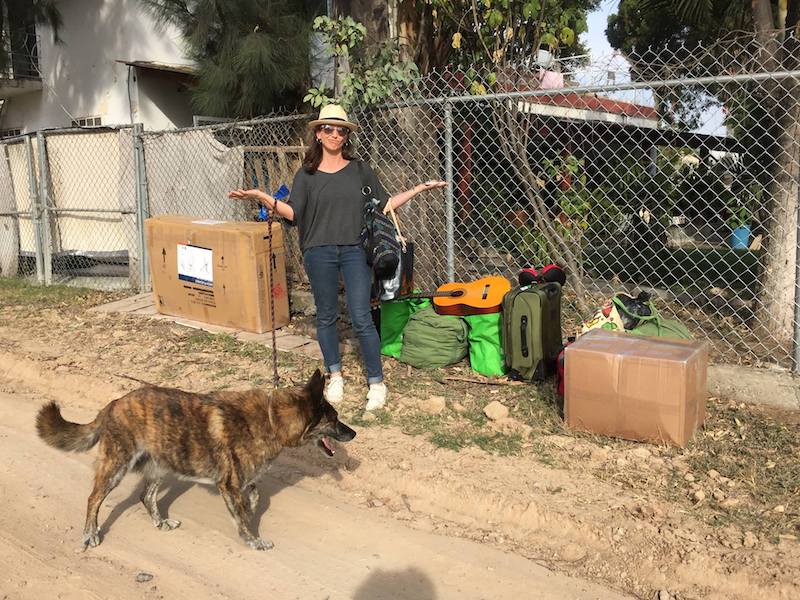 After much discussion Melody said, “Let’s just fly. It will be one shitty, stressful day and then it will be over. Hell, we sailed into Cuba with a dog we can certainly fly with one.”

At 03:30 on a cold, dark January morning, we met Arturo in the hotel parking lot. He would not let Jet ride in the front of the pickup truck so- while Mel entertained him with her pre-coffee Spanish, me and Jet rode in the back for the frigid twenty-minute drive to the Leon International Airport.

At the ticket counter, the agent was incredibly helpful and jovial at that ungodly hour. We paid the extra baggage fee to check my boxed up bike and then without issue, walked through security. Jet was dressed in his “all business” military type vest. Melody walked with him through the metal detector (a few times).

Then, just like that, we were sitting on the floor outside a closed Starbucks, fending off curious travelers and children who were surprisingly alert, even at that hour. 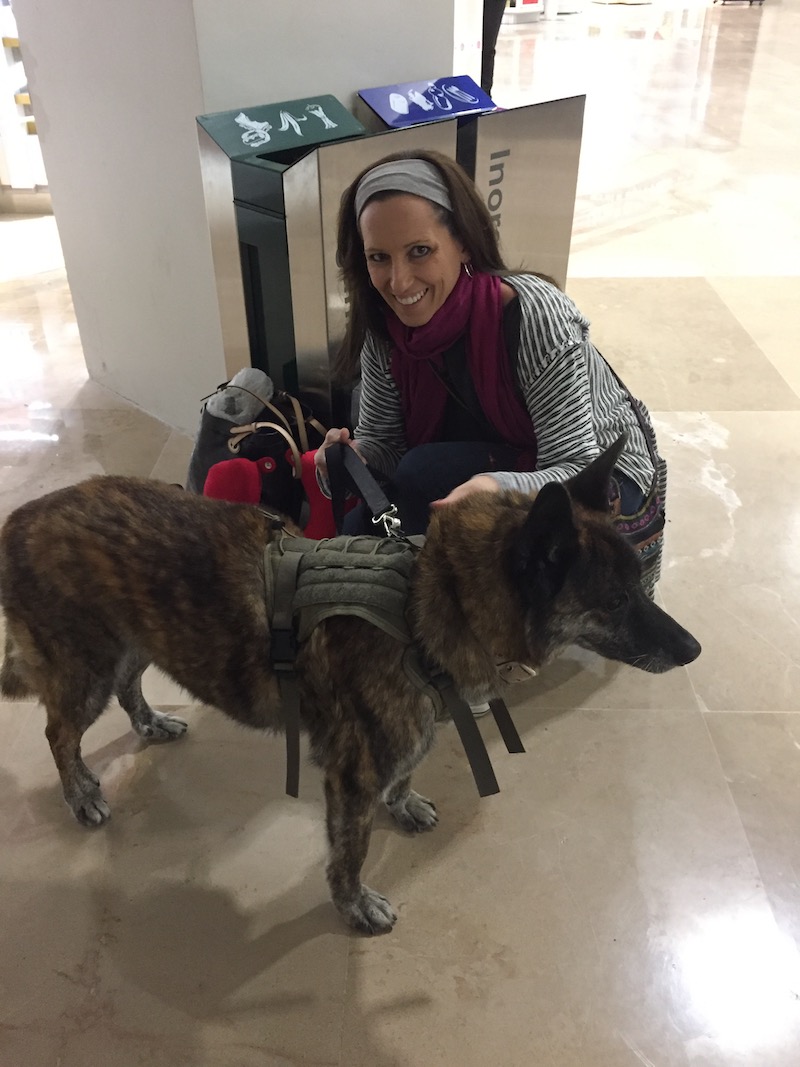 Jet didn’t make a peep. He didn’t whine or bark. He was an absolute rock star. The only glancing blow came from a snooty gentleman in first class when Jet gave his arm a delicate lick while waiting for the line to progress back to where the cattle get seated. Poor guy. To see his expression, one would have thought his hedge fund crashed.

When we found our seat, there was a lovely woman seated on the aisle. This time it was me with the tight-lipped smile suggesting, yep… lucky you ma’am. We’re in the seats next to you. Thankfully she said, “Oh, no problem. I love dogs. I fly with mine all the time.” What a relief. 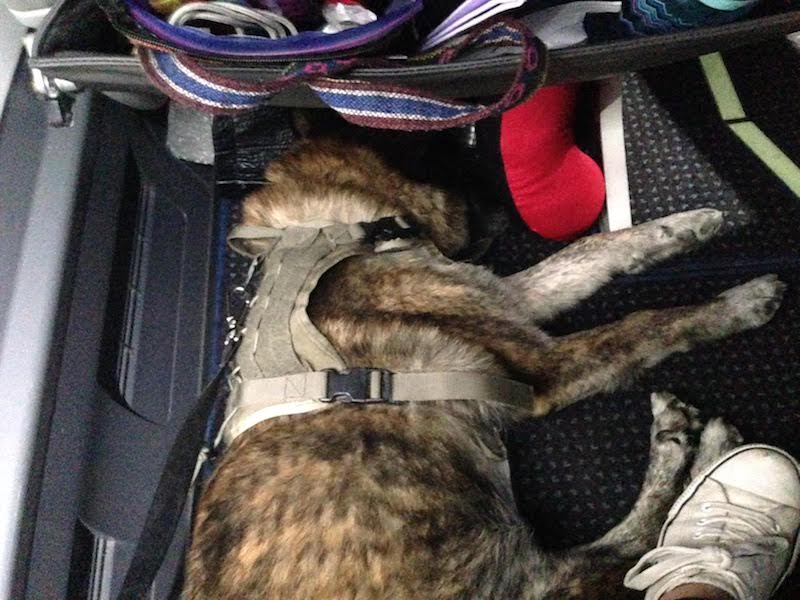 The entire trip went off without incident. Jet promptly curled up between Mel’s feet, laid his head under the seat in front of him and went to sleep. The trip through customs in Dallas was just as painless. The only hitch? When we arrived in Philly, the only thing that made it was my bike. The rest of our luggage was on a different flight. Welcome home! 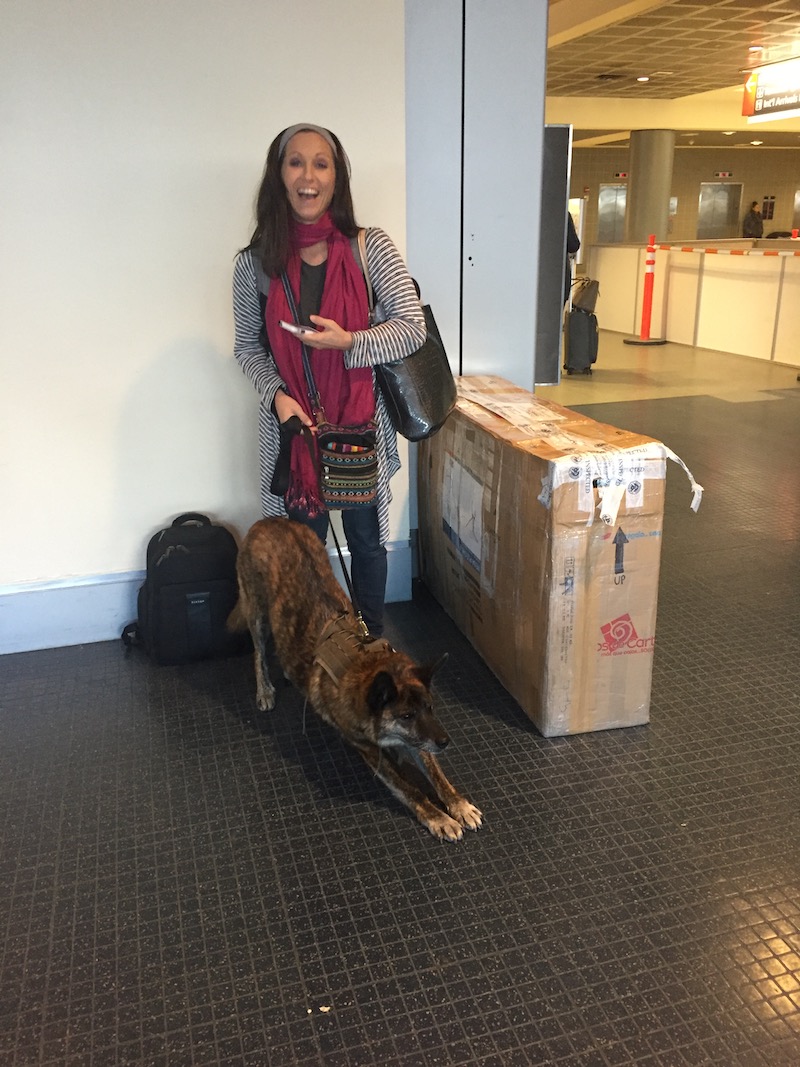 I can’t really explain how or why the universe works the way it does, but every time we’ve needed it on our side, it’s come through in a big way. All of the imagined stress of how our old dog would handle the trip home was unfounded. The scenarios I created in my head that had Jet barking at security K-9’s and whining or barking on the plane never materialized. It’s almost as if he’d done the trip a thousand times.

The Jet-pack never ceases to amaze me. Yes, he’s getting old and cranky. He’s almost blind and quite possibly totally deaf. But when the going gets tough and we need him to be at his best, he shows up. Every. Single. Time.