That’s a good question. Just how close is too close? Let me begin with some back story.

We spent this past winter in Ft. Lauderdale again doing some work on the boat and doing some work on the bank account. We managed to install a new Admiral Engine panel to replace the original cracked one, as well as new wiring to do away with those dangerous wire harness connectors that are on the old panels. We did the standing rigging (by ourselves) with some superb council from my friend and rigging extraordinaire Brad Storm of Storm Rigging and the boys at Sailing Services, whom you know from a previous post. We got all new running rigging and a new Profurl roller-furler (that we literally got installed the night before we left), and that was that. If you heard an enormous “sucking” sound around the end of May, that was my bank account! But the boat was finally ready to leave for her trip up to the Chesapeake Bay, where we are spending our summer.

We said our goodbyes to all our dock mates and around 11:00 am on Thursday, May 22 on a rising tide… supposedly. Now picture the scene: we toss off the dock lines, engine running, everyone saying somber goodbyes, “Ok… love you guys! We’ll call you! Email! You guys better stay in touch!” Them hollering back, “We love you! Be safe. We’ll be following you on the Spot Tracker!” Then… the anti-climactic dead stop. What? Mel looks at me, “What happened?” Tommy, our friend from Nashville who flew in to do the trip with us, looks at me, “Um…” and all I can say is, “We’re aground.”

Yep… Not fifteen-feet out of the slip, a large hump had formed since we pulled in a few months before and now on a rising tide (thank God), we stopped dead. Everyone was howling laughing. So much for sad goodbyes, ay? After about forty-five minutes, we got off, headed out the Port Everglades inlet and hoisted sail. It was a glorious day and we were promptly into the Gulf Stream. Not moving too fast in the light winds but moving, under sail, nonetheless. 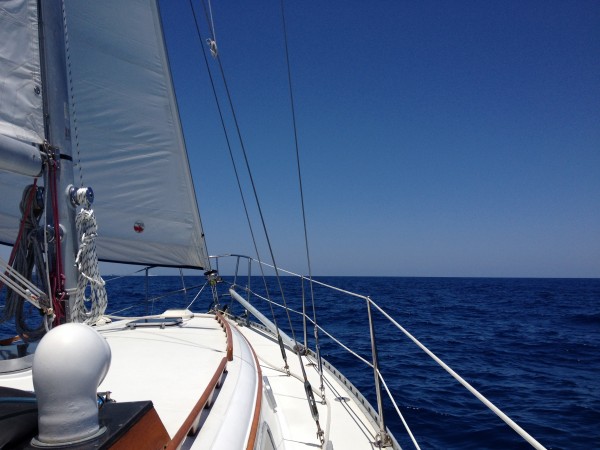 That night, we all got ready for the evening watches. Harnesses, tethers, binoculars, and the discussion about what to look for, what to do, and under no circumstances does anyone go forward on deck without waking someone else up. Also, no question is a stupid question. If you don’t know what you’re seeing ahead of you… wake someone up.

Tommy had first watch. I was to take the midnight to 3am, and because Melody likes to see the sun come up, she took the 3 to 6am watch. Tommy had never been on a blue water trip before. I had faith he’d be fine but we gave him the first watch cause that’s the easiest one to begin with. One gets really tired the first couple days at sea and until you get into a rhythm, it can be tough.

About halfway through his watch, I was awakened by a calm, “Chris on deck” call from Tommy. I lumbered out from behind the lee cloth and up on deck in my underwear, “You okay? What’s up?” As I turned to face the bow, I saw exactly what was up… a tanker… within 1/2 a mile away, maybe closer, directly off the port bow and crossing! Full speed. NOT GOOD.

I disengaged the auto-helm and went hard to port to dip his stern. We were on starboard tack so I was simply falling off, no drama of tacking or jibing but still. As we crested his wake and breathed in the stench from his exhaust, I had to be careful with my expletives here cause like I said, Tommy had never been out here before. I turned and as calmly as possible said, “Tommy… what were you thinking? That’s just too close.”  He said, “I was watching him for the last half-hour and then he was just right there. I was like hypnotized by him and then I realized too late he was on top of us.” That was how close it was.

We adjusted course, set the auto-helm and continued on. I sat up there for the rest of his watch trying to calm his nerves (and mine). We made some coffee, tried to make some small talk and mostly sat quietly. Mel came up for her watch and I briefed her on what happened and all was good. I will say this now and I’m gonna brag on my woman here, she blossomed on this trip like I’ve never seen. She was trimming the main, easing and trimming sheets, adjusting the course to suit the wind shifts… It was awesome.

Usually when I’m off watch, I’m rarely asleep. I’m lying there worrying if she’s ok. Is she cold? Does she need some coffee? Does she have to pee? Should I poke my head out?… but that’s not the deal. Every body needs rest. When you’re not “on” you should be “off”, period. Nap. Read. Whatever. Just don’t be at the helm unless you really want to.

So, besides one afternoon of getting kicked a little from a wind that backed to the NE while we were in the stream, it was a quiet and uneventful passage to Beaufort, North Carolina. We played with Tommy’s sextant and learned to dial in noon sites, we fished and Mel hooked a Mahi that jumped the line just as she was pulling it in. We did some laundry when becalmed and had a whole lot of fun.

The ride into Beaufort inlet was another story. It was just after midnight and we were trying to get in the inlet ahead of a front coming around Hatteras. We didn’t make it. The wind built to 25 and the waves were coming from astern and smashing us on the port quarter. We can never get into an inlet unmolested… ever.

Anyway… everyone was in the cockpit wide-eyed and helping me steer to the lights. I was almost certain we were going to get pooped before getting inside and we almost did, but around 2 am we were safely in. Then… the next problem… where the hell were we going to anchor?

I wasn’t going to try to anchor in Beaufort’s harbor since the wind was now 25 constant and it was pitch black. Lots of boats in that anchorage use bow and stern anchors since the current shifts so much and we weren’t going to try to navigate that as tired as we were. My idea was just to motor around the inner ICW until dawn and then continue north, drop an anchor at the first cove and sleep.

Mel was furiously checking Active Captain and the charts trying to find  a suitable stopping place. The wind was just too high to stop in the unprotected area where we were, just outside of the big turning basin inside the inlet, so we motored up the ICW at 2 knots, in the dark with Melody on the bow holding our spotlight that’s so bright it could shine to space.

She would illuminate my “Greens” and “Reds” so I could stay within the narrow channel, then she’d turn the light off, and fall asleep, sitting on the bow, light in hand! I’d yell from the cockpit, “Honey! Can you hit the green again?!”  Immediately the long, straight beam from hell would shine into the dankness and bam! There would glow my green. Then she’d fall back to sleep for about 45 more seconds.

We did this for an entire fifteen miles until we hit the Cedar Creek “anchorage”.  It’s a tiny little cove with 7′ depths and a sunken sailboat in the middle. But it was heaven for us. By then, it was 6:30 AM, and we promptly opened a bottle of wine to celebrate. The wind was howling. We were exhausted but totally fired up. It had been a great trip.

We slept the entire day, made a killer kale and white bean soup for dinner and ended the night with more wine and the entire second season of Breaking Bad on DVD… Thank you, Margaret. Melody is now hooked on that show the way Jessie is hooked on Meth.

Elizabeth City was pretty cool but we didn’t get to explore the town too much as we were tired from a long windy and cold day coming from Alligator River, not to mention the anchor moving drill in the middle of the night prior that was fun… no really. It needed to happen at some point. With our Mantus anchor, we aren’t worried about dragging so we had picked a spot to anchor that was exposed (trying to stay well out in the breeze to keep the mosquitoes away… bad idea). So when a storm came up around 2 am, we were rocking and rolling, so we hauled up our anchor and tucked into a small cove to re-anchor.

The trip inside to Norfolk was also calm and lovely. We did the Dismal Swap route for the first time. Loved it! The Pasquotank River is beautiful as it enters the swamp. We landed at AYB without incident. Had our fill of all you can eat sushi at the killer little Japanese restaurant around the corner and when I flew down to get Jet and the truck in Ft. Lauderdale, Melody decided she wanted to move the boat to a free dock… BY HERSELF. Yep. But that’s a story I’ll let her tell in her voice. She did great!

This was a great passage in so many respects (minus Tommy almost killing us). Tommy, whose new nickname is “Tanker Tom”, finally got to check Blue Water Passage off his bucket list. Melody felt like she had control of the boat on her watches whereas before, she’d wake me up to help with things. She got to cook and read and enjoy a passage and not fear for her life like all the others. Jet was boarded at his favorite doggie daycare and I got to enjoy Melody enjoying.

Now… mid way up the Bay, here we sit. Relaxing and looking forward to visiting with family and friends. We hope all our Ft. Lauderdale friends are well… we miss you. To our Chesapeake and Philly family, we’re here! Let’s eat some crabs! Drink some beer!