Hollywood California… I’d venture to say there are few places like it in the world… and I’d be wrong. In fact, America has five, yes five cities named Hollywood. California of course, Hollywood, Florida, Hollywood, South Carolina, Hollywood, Alabama and Hollywood, Maryland. Although Maryland is an unincorporated community with no city government, no mayor and no city council. It’s probably the most productive of all the Hollywood for those simple reasons. But I digress. And I think any place you call Hollywood is gonna be “unique”. I think if you name your city Hollywood, you’re asking for crazy old homeless women walking around in gold lame dresses with purple headbands. You’ll have singing man on the corner, skate punks and artists. “Hollywood” calls them all. We, the crew of Vacilando have been spending some serious time in South Florida and in particular, Hollywood #2 (I say number 2 because of population totals) or as I like to call it, “Hollyweird”.

South Florida is already the land of over-population, the rudest drivers in America and the kookiest pretty people who refuse to say hello even though you’re standing next to them at the coffee machine looking right into their face. Yep, the areas is rich with climate and culture yet deficient in courtesy and patience. But… I love Hollywood! While not crazy about the municipal marina, the place my awesome bike was stolen, the town itself is really cool. It has great funky bars and dare I say, “neighborhood” type joints that just ooze character and some seriously good eats. The Broadwalk on the beach is the absolute best place to people watch and if you play your cards right, you can hit it during Canada Fest when the place is infested with our French Canadian neighbors from the north who insist on wearing nothing but speedos and sandals into the restaurants. “Um, I’ll just have a beer… I’ve lost my appetite.”

On a really good day, you’ll catch “Thong Man” riding his bicycle over the draw bridge and get stuck behind him as he pedals at a snail’s pace to ensure you get the full view of his middle-aged hairy ass and back. Yes, the man rides his bike in nothing but a thong.  A really, really small thong. And… I’d like to kill him. 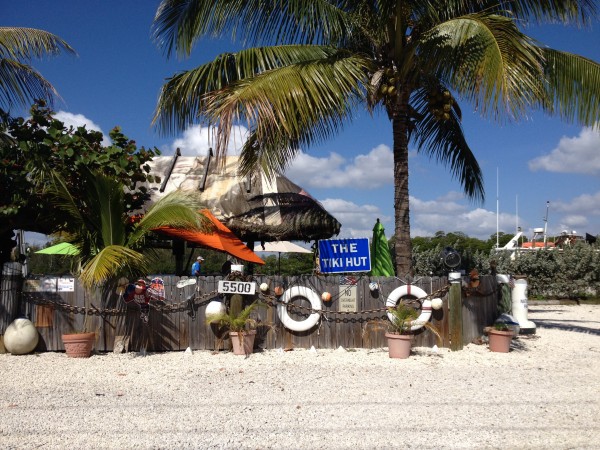 But I think my favorite thing about Hollywood is the Tiki Hut. It’s little, teeny-tiny tiki bar on A1A just south of Jimbo’s and just north of Sheridan Street. If you’re not careful, you’ll drive right by it… about five times. “Small” is an understatement. It’s literally just a 15×15 foot tiki hut tucked way back on a gravel parking lot with a bunch of old beer signs, a weathered picket fence strewn with fish nets and a porta-pot as it’s “restroom”.  And trust me… you’ll get little rest in there.

One day, Melody and I decided to stop. We’d driven by it a hundred times and just thought it was too weird to stop. Who runs the joint? Is it even open? Do they have food?  So many questions and only one way to find out. We pulled in on a Sunday afternoon and were met by Eddie, the “bartender?” He was originally from Southern California and has known the owner for nearly all his life. When you walk in… or up to… oh, hell… when you get there and get up to what appears to be a bar, Eddie will great you with an amazing smile and ask you what you want. “Two Buds if you got em”, I said… “Two Buds”, Eddie says and promptly walks away. He walks across the gravel and into a shed where a refrigerator resides full of frosty cold cans of Budweiser and other sudsy beverages.

There is a sea wall that kisses the intracoastal waterway and a tee box if you decide you’d like to drive some golf balls into the wildlife park across the ICW. There are a couple of picnic tables and errant lawn furniture to belly up to and if you ask Eddie, as I did, “What’s the story on this joint?” He’ll tell you. He’ll tell you as if he’s known you for twenty years. He’ll smile the entire time he’s talking and after he finishes telling his big Alaskan husky to “…go lay in the shade!” He’ll end with this, “…I want you to feel like you’re in your own back yard, man. Kick off your shoes and chill out. No mean people are allowed here and all we’re trying to do is not get swallowed up by all the bullshit coming.” Sadly, Eddie… I’m afraid the gargantuan Margaritaville Hotel and Resort that they’re erecting down the block is not only destroying the vibe of your little town, it is in fact going to cover you in bullshit and I fear a lot more mean people, too.