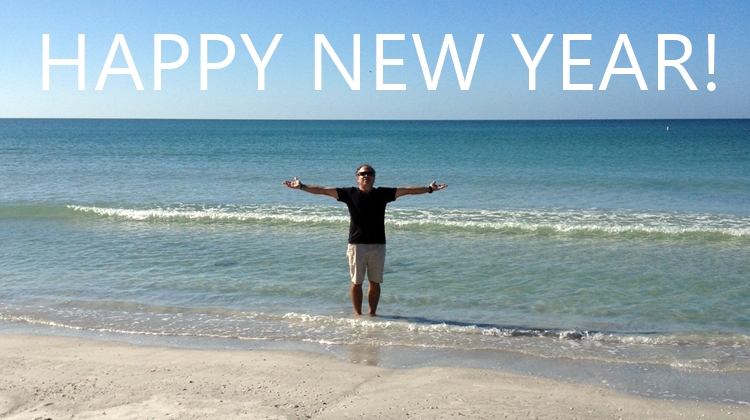 I can’t believe it. The holidays are over and here I sit, January 1, noshing some Dove dark chocolate and almond squares, still warm with the buzz of an Eagles win over the Dallas Cowboys. Hollow as it may be, it’s a nice way to end the season and begin 2017.

Can you believe it? Two Thousand and Seventeen! Where in the hell did the last decade and a half go? Seems like only yesterday we were all freaking out about Y2K and now we’re staring down the barrel of 2020.

New Year’s Day is not as celebrated around here as it used to be. Today marks two years since we lost Mel’s dad, Jim. She’s currently in Little Rock, Arkansas with family. Her trip served as a rite of passage of sorts. The goal to celebrate his life rather than mourn his loss. I just got off the phone with her and I can hear that she’s ready to come home. I’m ready to have her home.

I’ll wait to take the Christmas lights down from the mast until she’s had another chance to enjoy them. It’s warm and cozy onboard V when the colored lights are glowing. Jet is curled up on his dog bed, feet twitching in pursuit of an imaginary bunny or squirrel. Boy, is his life gonna change in about three weeks. 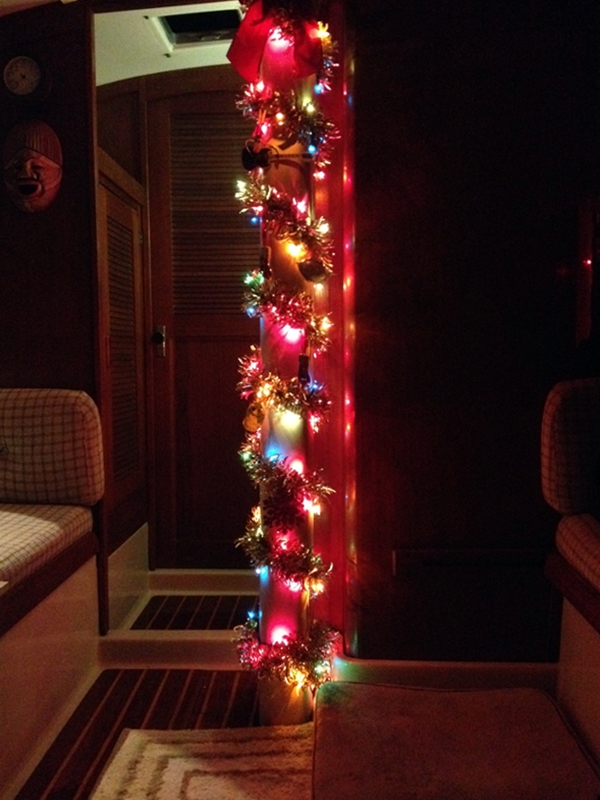 Actually, all three of our lives are about to change quite drastically. After almost five years living aboard and traveling the east coast, Chesapeake Bay, and Florida, we’re leaving. Yep, leaving the U.S.A. Let me back up. I’ll try to give you the Reader’s Digest version.

Last October, we landed in St. Pete for a planned stop. We needed to get some big ticket items for the boat, and we felt that spending a year in one place, without the stress of traveling, and while making some money would go a long way to making that happen.

Since that time, we’ve added a bunch of things to V in order to get her ready for our upcoming trip. In addition to our regular OCD maintenance, we got some necessary items that should make life a little easier on the hook and allow us to keep away from marinas.

265 watts of solar panels, which we mounted on a custom stainless rail system atop the bimini, have been keeping our modest power needs met without a single issue. Even during the short winter days. What a relief to unplug from the pedestal. No more worries about unsafe currents and surges. Of course, our SmartPlug alleviated most of those already but, no electric bill is a pretty snazzy benefit to boot!

To supplement the solar, we picked up a Yamaha 2K genny. We upgraded the almost new Profurl, added an extra low stretch halyard to the mast, and some new Garhauer jib cars and traveler controls.

A new-to-us 2-stroke Yamaha 8HP motor will power our new Mercury inflatable. No more rowing a tippy hard bottom dinghy with Jet jutting from side to side, upsetting the “stability.” Let’s see, new memory foam v-berth topper, new fresh water pump, new screens for the hatches, and a Berkey water purifier. Are you feeling me here? It’s no wonder I have not written a post since our friend Mike from Boat Radio wrote a guest post in November. It’s been very busy around here!

In April, we published my second book, What’s Up Ditch, which is featured in the 2017 Waterway Guide. Thanks, Waterway peeps! In September, I completed my first fiction novel (more to come on that in another post). Melody (among the million other things she’s got going on) just finished the edit.

Speaking of Melody, this past Friday, she took the most major step of all. She quit her J.O.B! She was very nervous (understandably), but she did it. Now, she’ll be ramping up her Maggie and Milly nautical jewelry line and doing more freelance work. She’s also about to launch her first online course. Like I said, it’s been a bit crazy around here.

So… on January 20th, or there about, we are shoving off. I would love to be as far away as possible from a television, radio, and any internet connection as they inaugurate you-know-who, as our next Commander-in-Something. Actually, I can’t think of a more symbolic day to leave on the adventure we’ve been working on for the last four years.

Is the boat ready? Are we ready? Is Jet going to be miserable? Do we have enough money? What are we forgetting? These are all the things I’ve been asking myself in the dark when I’m pretending to sleep. Honestly, we’ve been sitting for a year. We’ve never sat in one place for more than four months. We’re rusty and that’s a problem. We’ll remedy that with a brief shakedown trip along the coast before crossing the stream into Cuba.

Our last order of business, once all the paper work is in order, is to get some bottom paint on the girl, and check her running gear and rudder. If we get no surprises, we’re headed for Havana. After that, Isla Mujeres and parts south. Our “perfect world scenario” places us in the Rio Dulce sometime before June. We’re not making plans much past our first and second destinations. We sailors know what happens when we make plans. There are many forms to file, copies to be made, and certificates yet to be secured.

Three weeks goes by fast. Hell, look how fast the last seventeen years went. I’m not sure what you guys have planned for the new year but it is my hope that you achieve whatever it is you dream about. It’s my hope that strength and a calm spirit accompany your trip through two-thousand-seventeen. Personally, I can’t believe how fast all of it has gone. I lost many of my musical heroes this past year and I’m truly sad about that. They shaped me. They kept me company on my night watches and I felt more secure because they were still here. I won’t dwell for too long on that.

But, we are guaranteed nothing. If you wake with a dream or a fire in your belly, don’t ignore it. You owe it to the universe to blast through the bullshit that scares you. You get one shot at this. I know two people who’d love a second shot and I refuse to let them… or their daughter down.