It’s been a few weeks. I had some ideas and I even did a post about hockey. I deleted it. I feel like there must be a certain “grain” to this endeavor. That post felt a bit like a knot right in the middle of a nice piece of mahogany. So I cut it out. I’ve been at a loss for words a little bit since all of the madness has settled down. I mean, when I wake up every morning, I’m struck by temporary-ness of my surroundings. My clothes hang on a chrome and plastic rack bought from a big-box store. It barely holds what it needs too. It looked so hip and… current on the box. My shoes and jeans reside on a wooden shelf, open to the room and slammed right next to our little, double bed. Plastic totes full of socks and tee-shirts line the walls and it’s a little like living in a storage unit. After 20 + years in the music business, I know what that feels like. The hardwood floors are nice though. I’m not a carpet fan. The amount of dirt, dander and dead skin that gathers in one’s carpet makes me queasy. I like the hardwood. Jet however, feels differently. He prefers the Persian rugs. I got two rugs while I was overseas on a USO Tour in 2001 and they are beautiful. Were beautiful. We’re keeping them. One is in the living room and one in the bedroom. They aren’t very large but they mean something and I like looking at them. I like the way they feel on my bare feet. While in the middle-east, I learned about these rugs and developed a strong desire to bring a couple back. I became infatuated with the amount of skill and devotion it took to complete such an amazing work of art. Art that lasts centuries if properly cared for.

I can say honestly that mine are not properly cared for. They haven’t been cleaned since I got them and while I try desperately to keep them in good shape, it seems like whenever something gets spilled or Jet gets sick and decides to throw up at 3 am he does so on my favorite rug. I’ve come to the conclusion that it’s his favorite too. This happened the other night and to add insult to injury it was raining. Pouring rain and cold. Jet was up all night making us very nervous with his licking at nothing, looking like he was choking and pacing back and forth. Up to the front door, circling, whining and back to his spot at the foot of our bed. So we got up, each taking turns rubbing his belly and asking, “do you think we should go to the emergency vet?” After a few rounds of this I said, “ok, let’s go for a walk.” I’ll take him for a walk and he’ll do his business and life will be fine. I’ll get an hour of sleep and we’ll move on. Well he didn’t do any business. He did pee on every errant bush, pole and curb along our cold, wet walk. Me? No jacket. No shoes. Jeans and a tee-shirt. Dumb. So, at 3 am me and my sick dog stroll down our temporary street in our temporary neighborhood in the pouring rain and returned home. Both of us soaking wet. Of course he waits until just inside the door to shake all that water off. Me… freezing cold, dripping wet, wide awake and not getting anymore sleep. I towel us off and crawl in bed anyway. Five minutes later… Mel is out of bed as his grumbling stomach is no better. Then he starts to circle and make that sound… It’s a horrible sound. His big shepherd ears slump out to the side instead of those proud erect ones he usually carries.

He threw up. A massive blob of undigested, very expensive food. And you know what? It was on my rug. His rug. Not on the hardwood floor. That would be too easy. Nope. We’ve had Jet for about three years and every, single time he’s gotten sick, it’s been on “our” red, silk Persian. He was fit as a fiddle after that. Tail wagging, prancing around like he won an award. And… up into one of two chairs we still own. Nite-nite.

The moral of the story? I don’t know the moral of the story but I know this. My grandmother had couches that were covered in plastic slip covers for her entire life. I remember as a kid, The plastic runners that protected her carpets from the front door to the kitchen. Tributaries of plastic meandered throughout her modest abode in South West Philadelphia. My ass never touched the fabric of those beautiful couches. My bare-feet were never allowed on those carpets. Some would say they were “properly cared for”. My grandmother died at 96. No one in my family has any of that furniture. The house sold to a complete stranger and all that “proper attention” at 54th and Gross street in Philadelphia went for naught. At least in my estimation. So, I guess I’ll enjoy my rugs in my way and Jet will enjoy his rug in his way. Either way… Someday… Someone, probably someone I don’t know, will inherit a work of art that has been walked on with the barest of feet, lived on, loved on, cried on and laughed on. And yes… puked on. And there’s nothing temporary about that. 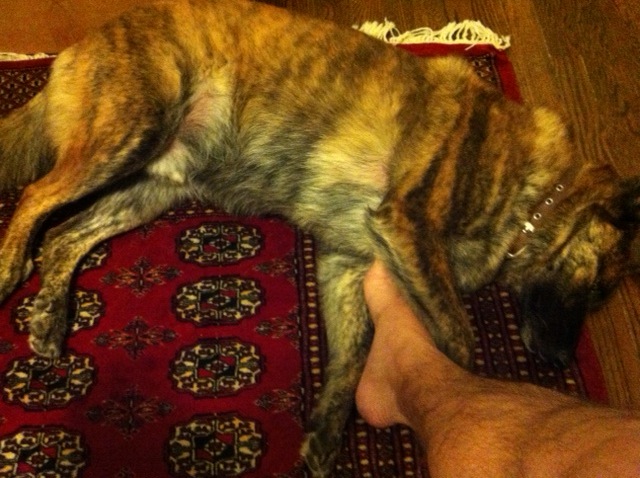