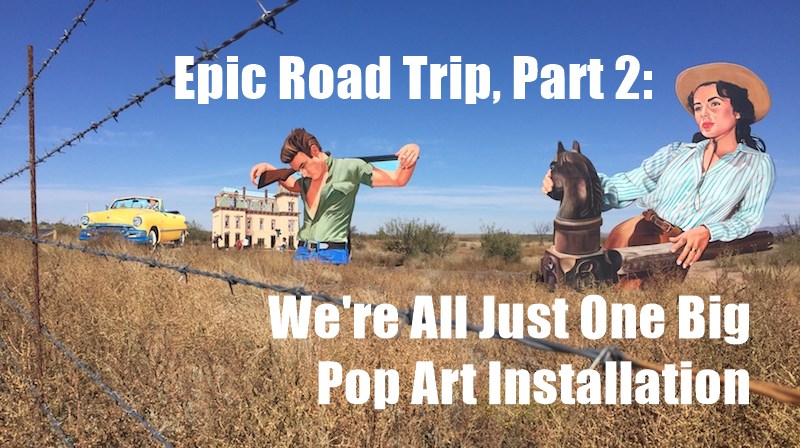 Did you know that Arby’s got it’s name simply by spelling out the “R” and the “B” as in, Roast Beef?

Profound, right? And it’s just one example of our drive-time conversations. We can cover a variety of topics on any given day. How do dolphin sleep? What kind of bird is that? What animal gives you gray meat? (In reference to Krystal Hamburgers). And since we’re on the subject, why two spellings of the word gray? As long as we stay away from politics, we’re good. I think most of you will agree?

Another thing we can agree on is that one of the best things about being on a road trip is discovering something new or being surprised by the unexpected.

I mentioned Texas’ Route 90 in part one and it’s on that road we found the unexpectedly, delightful town of Marathon. On the map (Yep, we used a real Rand McNally Road Atlas) it was simply the spot where we were supposed to turn left to get to Big Bend National Park. Whoa there cowboy! Not so fast there bub. Marathon is not just some left turn, no way.

Like many “old west” towns, Marathon is bisected by a set of railroad tracks. And yes, you’ll find the ubiquitous two-pump gas station, a couple of rundown RV parks and motels, and the old county jail.

But, if you stop long enough and let the place soak in a bit, you’ll noticed something. You’ll notice that the historic Gage Hotel has been completely remodeled and it’s fabulous. You’ll notice the newly renovated V6 Coffee Shop next door along with its Italian outdoor cafe tables.

If you stroll around the corner, you’ll find a French Grocery, stocked with organic foods, body care products, and fair-trade coffee. Right next door is the newly opened Brick Vault Brewing Company. This town is preparing for something. It’s on the uptick. And… it has a sense of humor, which a lot of America is lacking these days.

On its western city limit, you’ll run across the now famous, or should I say, infamous, Target store, complete with Target shopping cart and prop bags. It was originally an old, cinderblock train depot. Pretty clever. 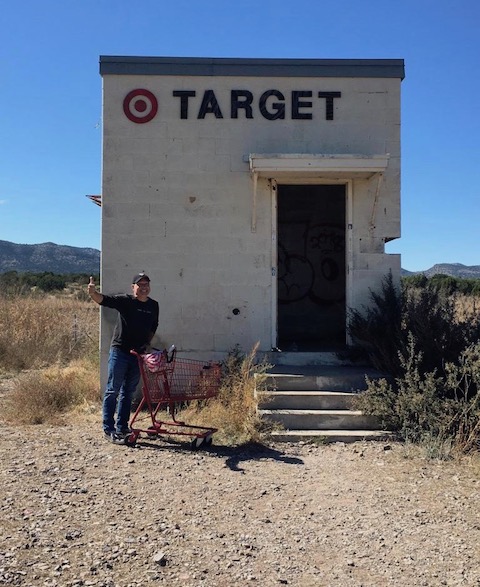 It was created in 2016 and nobody really knows who did it. Most agree though, that it’s an homage to the famous Prada store just down the road in Marfa, Texas. But, I’ll get to that in a minute.

As we were leaving Big Bend, we decided we wanted to see the Rio Grande (proper pronunciation: Ree-oh Gran-day) in it’s most natural environment so we took the only road that goes there, Maverick Road. Road is a stretch.

At its best, it was gravel. At it’s worst, it was a rocky river bed and sometimes it was like driving on a sandy beach, but man — was it beautiful. It led us to the small campground of Castolon where we tipped our hats to the Rio as she raced by. Across the Rio was Mexico’s Santa Elena Canyon.

Maverick Road terminates at the paved highway that leads into the most unique town on our journey,  Terlingua, Texas. This town is probably the most famous town you’ve never heard of. If you do know it, it’s probably because it’s the place where the first chili cook off took place. Yep, the first ever.

I encourage you to visit the official Terlingua website because I just can’t do the place justice in a few paragraphs. If you can imagine a desert town with, oh… two dozen full-time residents living in everything from Airstream trailers covered in painted eyeballs to partially converted school buses. Toss in an ultra-modern hotel that’s comprised of clear plastic domes and a bunch of steam punk art. That’s Terlingua. 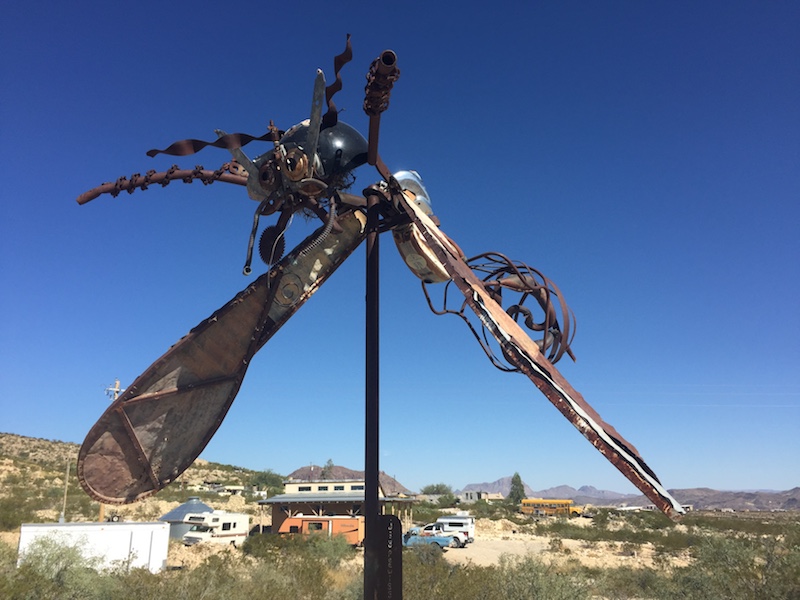 Head west along the Rio’s twists and bends and you’ll hit Ojinaga, Texas and route 67. North on 67 will drop you in one of my all-time favorite towns, Marfa, Texas. If there is one town in the United States of America that will make you question everything you’ve ever known about what and whom should be where, it’s Marfa.

This town legendary status goes way back.  In 1956, Giant, a movie staring James Dean, Elizabeth Taylor, and Rock Hudson was filmed in the Hotel Paisano and on many of the surrounding ranches. In 2018, artist John Cerney created 40-foot-tall plywood cutouts of the movie actors and installed them in the middle of the desert, west of town. The car even plays music from a nearby speaker. It’s really something to see. 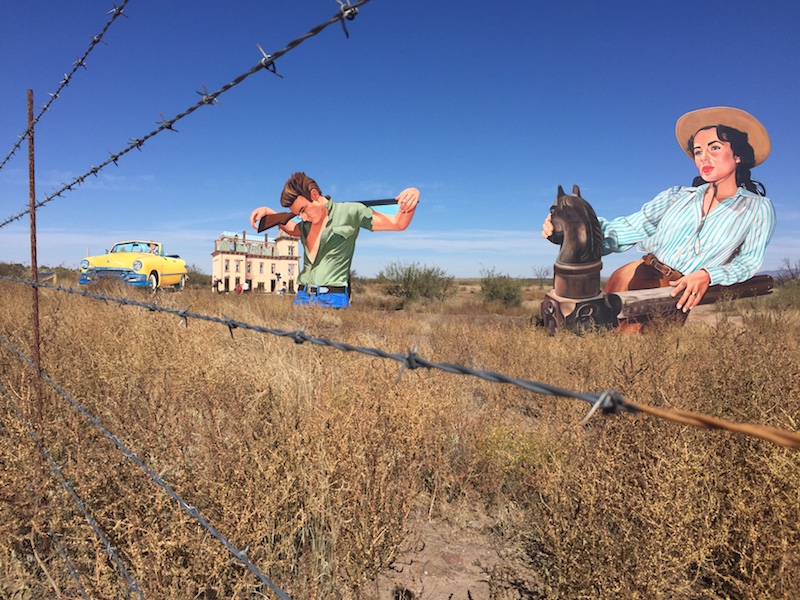 In addition to its Hollywood connection, Marfa is home to a mysterious phenomenon knows as the Marfa Lights. On the eastern edge of town, the Texas Highway Department built a viewing station where seekers can park safely so as not to stop on the side of the road at night. Reported sightings are rare and everyone in town has an opinion as to what they are. Some have yet to see them.

I will say this knowing that there will be skeptics. On the night we went, both Melody and I saw several glowing orbs far off in the desert darkness. For a brief few seconds they hovered, changed colors, dipped in irregular intervals, and then disappeared. It was very strange and I have no idea what I saw.

No matter what you believe, no visit to Marfa would be complete without a late-night ride out into the desert with some Marlboro Reds and cold Bud.

As if these things weren’t enough for you to add Marfa to your must-see list, maybe this’ll do it. Marfa is the most unlikely artist hub you could imagine. Back in the 60s, artist Donald Judd was the first to relocate from L.A.. He was seeking wide open spaces and undisturbed light. And he picked Marfa. His huge concrete and aluminum sculptures surround the reimagined military barracks. The entire base is now a museum housing Judd’s cubist creations.

I will add, it’s quite strange seeing the hoards of L.A. and New York hipsters prancing around a dusty, west Texas down in their high-wasted, $300.00 jeans and starched Stetsons.

And finally, no visit to Marfa would be complete without a visit to the Prada store. This permanent art installation was created as a “pop architectural land art project.” 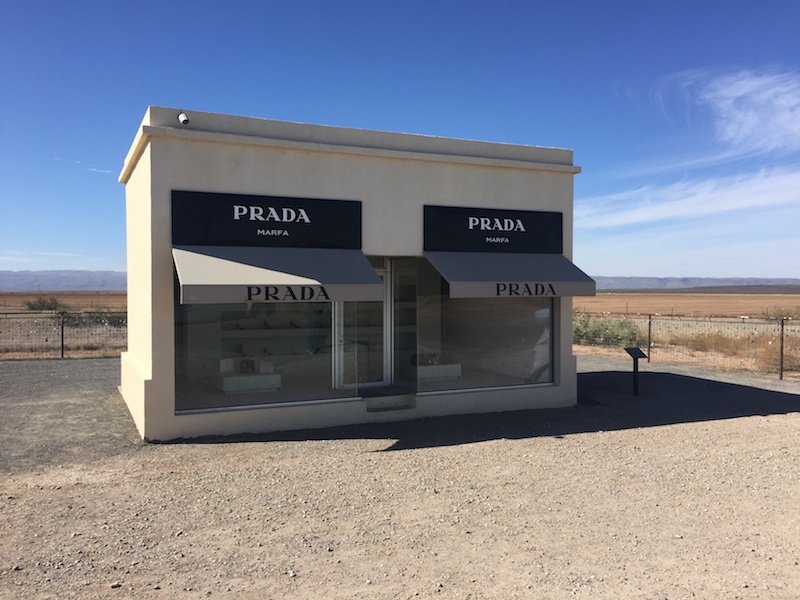 Installed in 2005 for the sum of $80,000 (or 40 Prada handbags), the store was stocked with the entire 2005 collection. Be forewarned — if you plan to rob the place — it’s already been done. Because of that, the windows are now made from thick, bulletproof glass. All of the handbags have had the bottoms cut out and the shoes are right foot only. Bummer. That was going to be my retirement plan.

The building is meant to slowly decay and disintegrate back into the earth, serving as a surrealist commentary on Western materialism. I know… that’s some deep shit right there.

My favorite thing about the Marfa Prada might be all the whacko theories flooding the internet that suggest the installation is a trap put there by aliens to attract potential abductees. Smoke another joint there, Cletus!

Our last big stop before crossing the border was Joshua Tree. Aside from the $5.09/gallon gasoline, I love Joshua Tree. Yeah, yeah, every hippie on the planet loves Joshua Tree. While I don’t consider myself a full-fledged, patchouli wearing hippie- hippie, I’m definitely a tree huggin’, clean air and water-loving commie.

I especially love the actual Joshua trees, which aren’t trees at all. They’re yuccas! Or to be exact, Yucca Brevifolio. The Spanish called them, izote de desierto (desert dagger). See! Who said you don’t learn shit here at Mondo Vacilando?! But I digress.

Melody found us a true-blue tiny house to rent for the two nights we stayed. It was spitting distance to the Joshua Tree Saloon and about three miles from the entrance to Joshua Tree National Park, which would be the sixth National Park we’d visit on this trip! 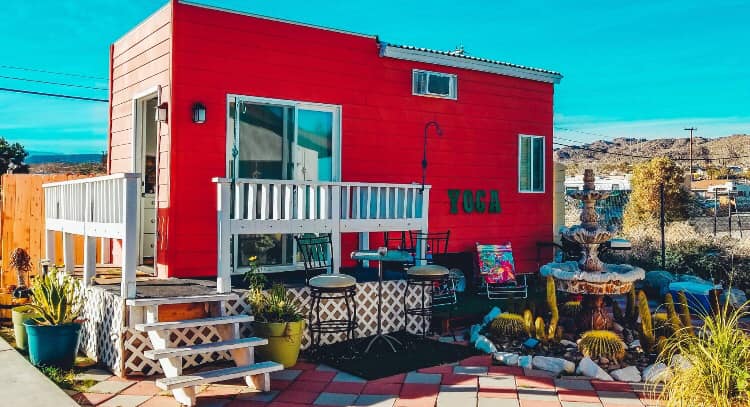 If you’ve ever been to Joshua Tree, you know how magical it is. It was so magical, we actually started looking for places to rent in case we decided to abort, Operation Baja-Humbug.

I think that’s what I enjoy most about this kooky life we live. Having the freedom to decide to stay somewhere if we like it.

It’s funny, whenever we hit a spot like Joshua Tree, we end up in some cafe or pub, scribbling down notes, our brains going a mile a minute. “This town needs a coffee shop! Gelato! We could revive Hobo Dog (our former organic dog treat business) and kill it here!”

Yeah, this is pretty much our everyday coffee conversation.

Then we come to the same realization that we always come to. The reason we haven’t done any of these things is because we don’t want to be tied to a physical business or a piece of real estate right now.

I’m not gonna lie, sometimes it sucks. Working freelance or as independent contractors and running several businesses via the web is hectic and stressful. We don’t have the security (I hate that word) that comes with a regular, salaried gig and yes, sometimes that gets to be a drag. Especially for someone like me who doesn’t do well with idle time.

That being said, we’ve managed to quilt together enough income sources that it ultimately never comes down to just one stream that has to keep us afloat. And we’re always looking to add more.

To those on the outside, it might look like we’re never working, but the truth is, we work all the time. Every day, most nights, and almost every weekend. It’s what we’ve gotta do to keep this lifestyle going. And that’s fine.

We keep it small, but we keep it rolling.

But it’s paid for.

We live in a 46-year-old Swedish sailboat, also paid for.

We have no debt, no mortgage, and no college funds or student loans to worry about. That means when an opportunity comes along, we can take it.

There is one constant thread that runs through everything in our lives and that’s the thread of gratitude. We are grateful for every second of this kooky ride. And for every single one of you we’ve met along the way.

When we sold Vacilando in Guatemala back in 2017, we thought the ride was over. Never in a million years did either of us imagine that it was just beginning. 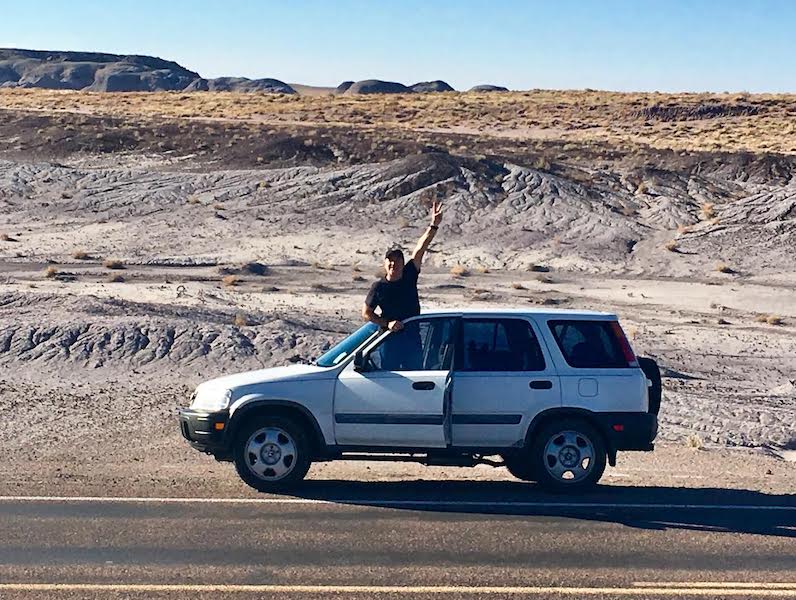 Each and every one of us is a spectacular, living, breathing piece of art. We’re never sure how long our show will run and we all know how it ends. Why not live your art as if it will one day be on display at the Louvre.
Felices aventuras!

MELODY: Writer who thought her boyfriend (now husband) was crazy for wanting to live on a boat, but never one to shy away from an adventure, decided to play along and fell in love with cruising. She blogs about being a digital nomad and how to make money while cruising at Saving to Sail.