Melody and I have been wanting to visit the Dry Tortugas for years. This year, after getting our bottom job done and putting the unexpected jib expense behind us, we headed out Gordon Pass inlet. With Naples behind us and a light but steady northeast breeze, we pointed V toward the Tortugas.

We had a wonderful overnight sail, complete with plenty of dolphin sightings (which always excite Jet). When we passed into the northwest channel and Fort Jefferson grew on the horizon, any fatigue we had fell away. The water turned a bright Caribbean blue, and we were excited to finally see a new place we’d been wanting to go to for so long.

Tortuga is the Spanish word for turtle or tortoise. The Dry Tortugas is a national park 70 miles west of Key West. Seven small islands and some reefs make up the park. Yes, it takes a bit of effort to get there, but let me tell you – it’s worth it.

Garden Key is where Fort Jefferson, the largest masonry fort in the U.S. still stands. Built between 1846 and 1875, it was never actually finished. Settling issues cracked the fresh water cisterns and allowed them to be contaminated with salt water. Fort Jefferson was never fired upon, nor did it ever fire a shot.

There’s a great anchorage just off the fort but it can be tricky because:

Once into the lee of the fort, we searched for a bit of water less than 30-feet to drop the hook and found a sweet little sandy spot in about 16 feet and watched our Mantus quickly sink through the clear blue water. Ahhh, now we can relax.

If you’ve been reading along for awhile, you know that we’ve battled with our dog Jet when it comes to trying to get him to use the bathroom on deck. He’s only peed on deck a handful of times over the past five years. We knew he really needed to go, since his last bathroom break had been about 24 hours prior and since we will be doing several overnight trips with him this year, we wanted to use the opportunity at anchor, with the boat not moving, to try to get him to pee on deck, hoping that it would “click” for him and future attempts would be more successful. The plan was to get him to pee, then launch the dinghy and take him for a proper walk and bathroom break shoreside.

Success! As he peed, we praised him and ran to get treats. Good boy! We did a quick rinse with the bucket, now let’s launch the dinghy. Oh, wait… he’s not done. Now he’s pooping on deck. Problem is, Jet’s not a “standing pooper” but instead a “walking pooper” and at that moment, he was walking – and pooping – all over the deck. Bow, side decks, cabin top, you name it, it got pooped on. “Ummm… good boy!” we said, mouths agape as we realized how much shit we now had to clean up. So much for relaxing. Watch what you wish for, I suppose!

The next morning, we went ashore to tour Fort Jefferson. The fort is busier than we expected, but I’d still recommend going. The ferry from Key West docks in the morning and unloads about a hundred eager passengers. Many snorkel on the beach to the southwest of the fort, some tour the fort itself, and others set up tents and camp overnight, something I had no idea you could do! The passengers (minus the few campers) leave on the afternoon ferry trip back and that’s when it gets nice and quiet again. 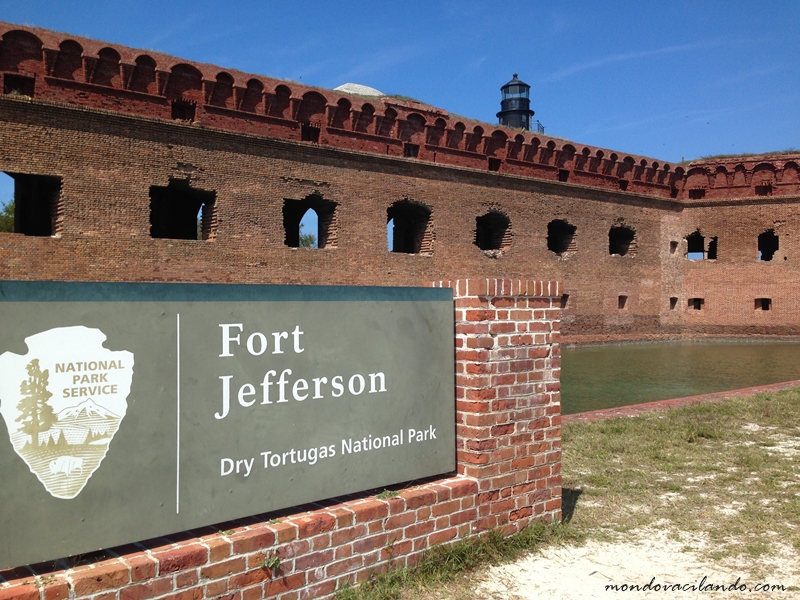 There are also a couple of sea planes that make a couple trips from Key West each day. I think we were a bit close to their take-off and landing strip but we had a great spot and there was no way I was pulling up the anchor. (If you haven’t already, watch our video at the top of this post to see just how close they get!)

One thing you might hear from others who have visited the Tortugas is that there are no bathroom facilities and you have to take all trash with you off the island and back to your boat, and that’s true to some extent. However, we found that if your trash was minimal and you asked one of the deckhands on the ferry, they’d usually be happy to let you throw it away in the trash cans that they carry back with them.

The restrooms on the ferry are also open to everyone while the boat is on the dock. Use it – they don’t mind as long as you’re courteous. You can even use the outdoor showers on the ferry designated for the snorkelers to wash the saltwater off. There are also outhouses on the beach at Fort Jefferson and while not glamorous, in a pinch… well, any place is better than no place. As far as the fort, it’s pretty awesome to explore and see it all. 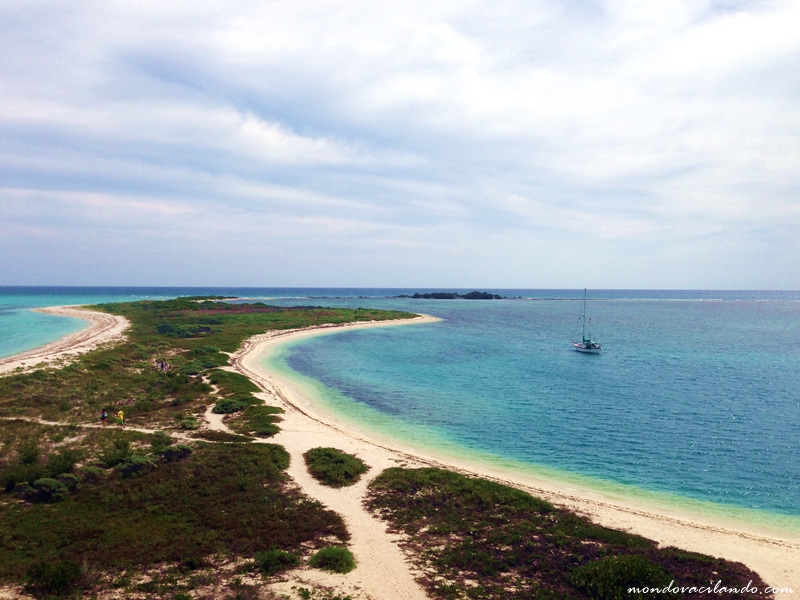 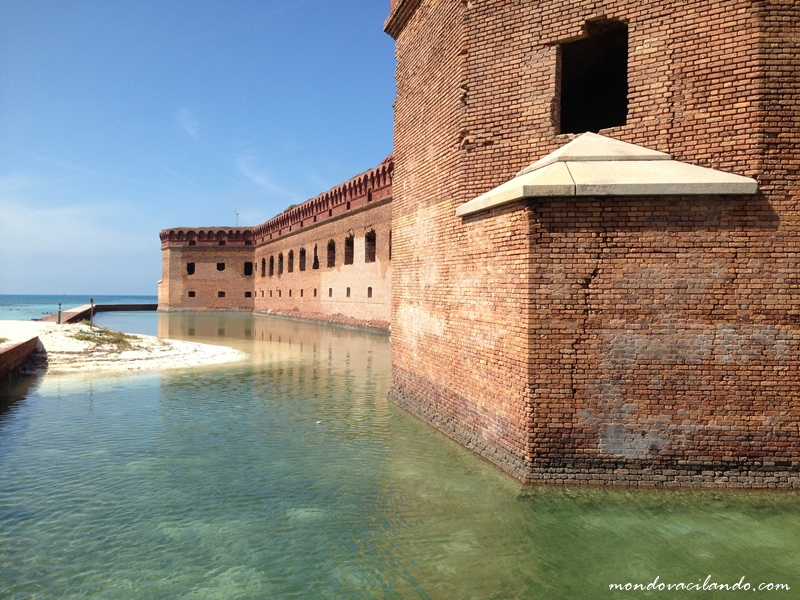 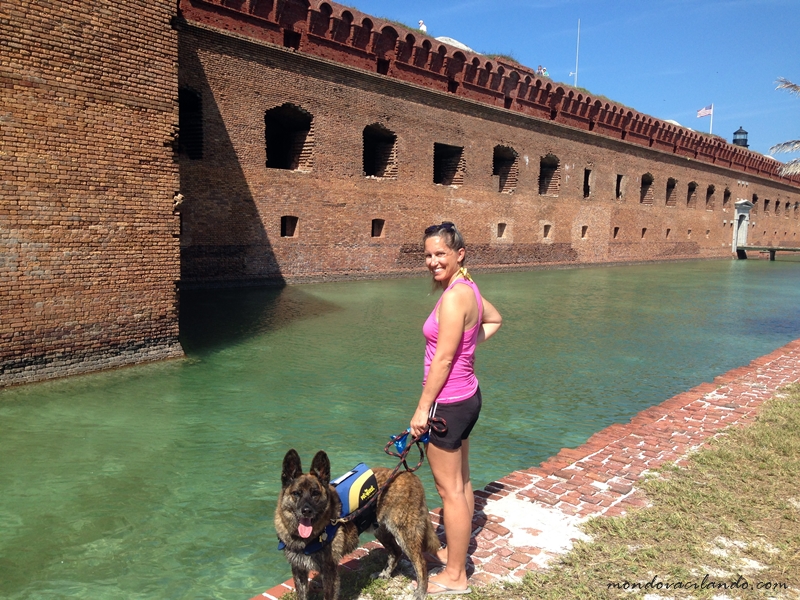 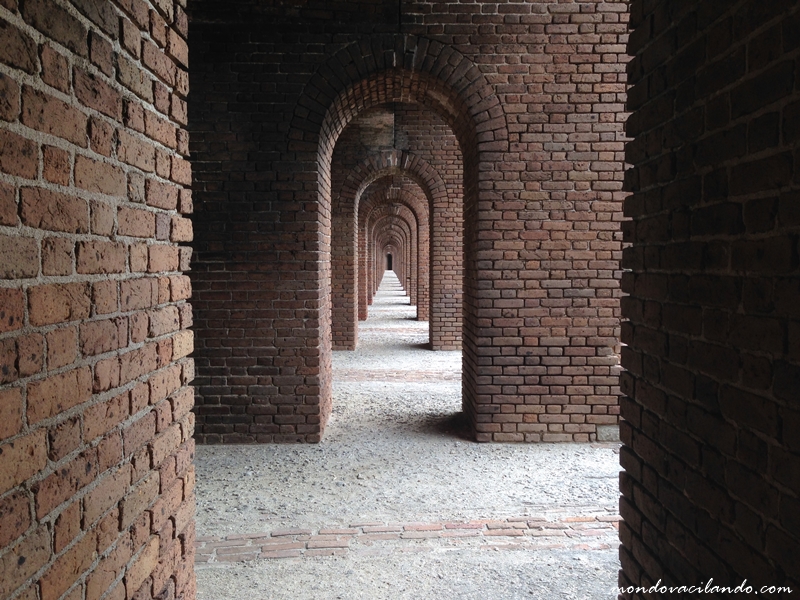 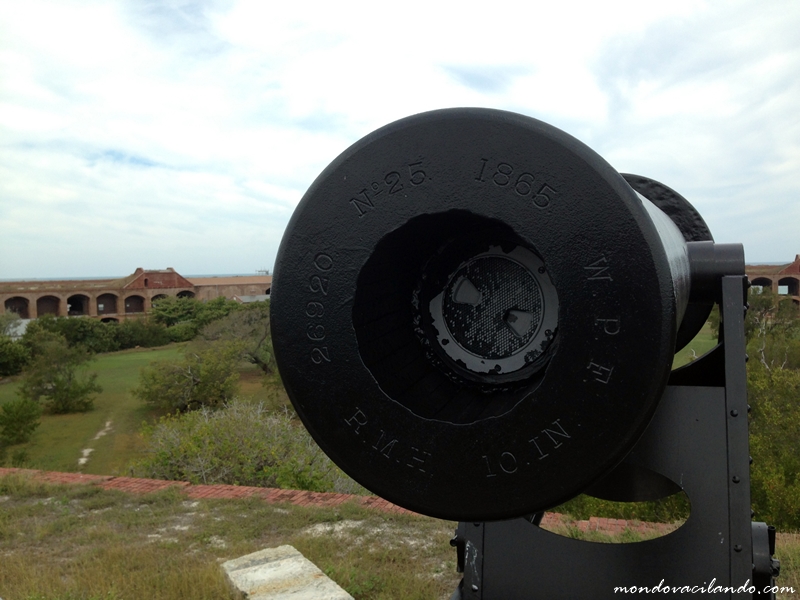 For me, the Tortugas always represented the place where I could see the legendary goliath grouper. These fish are rumored to reach 800 pounds and I have always been fascinated with seeing one in the flesh.

Not to disappoint, on our first morning in the anchorage, I just happened to peek over the side and nearly crapped my pants. One of the big boys was directly under our boat.  I think he was hoping for a Dutch Shepherd snack. Scampering for the GoPro, I did my best to get some footage. It was incredible. These guys are huge and he/she isn’t even the big one! 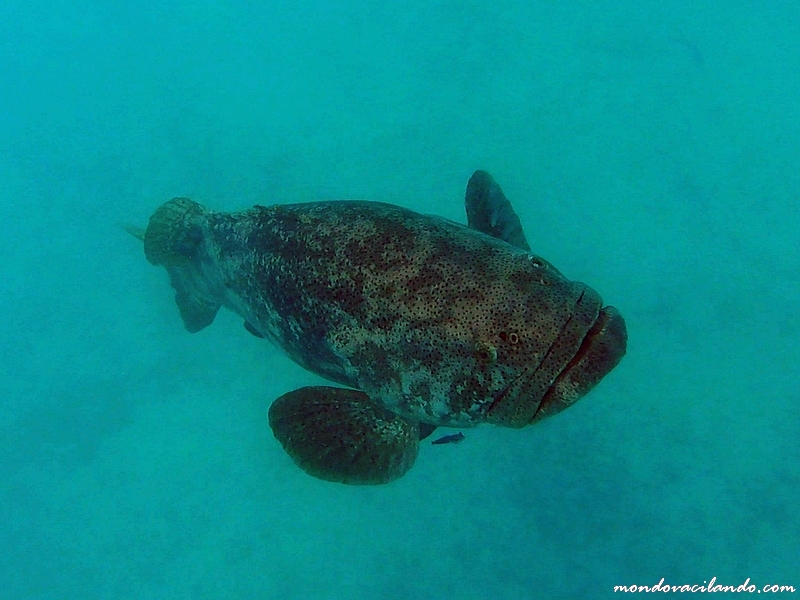 On our second morning, after we brought Jet ashore for his morning constitution, we headed back to the boat when I spied a Cabo Rico anchored close to the beach. I jokingly said to Mel, “Honey, that’s a Cabo 34. How funny would it be if it was Joe and Maribeth?” Joe and Maribeth are friends of ours from our yacht club in Nashville who’ve been cruising the western Caribbean for the last year, and we’ve been following their travels since they were doing the same trip we are now doing. The last we had heard from them was probably a month before when they were Isla Mujeres, Mexico and preparing to head back to the states, so we knew the chances were slim that it was them.

I altered course and as our dinghy got closer, Melody noticed the Harbor Island Yacht Club burgee off their port shroud and we began to smile that special smile you get when you know the universe is conspiring in your favor. La Peregrina was indeed swinging on her hook a mere 300 yards from Vacilando.

We pulled up to their boat and knocked, and let’s just say that they were completely shocked to see that it was us. After a cold Modelo (Thanks Joe!), we headed back to our boat to drop off Jet, then came back over to visit more with our friends.

They were a wealth of information for our upcoming trip. The following morning we toured the fort again with them, and that afternoon we watched with tears in our eyes as La Peregrina headed north for Fort Meyers. They were headed home after an amazing year “of living dangerously” as they put it. Our paths will cross again, of this I’m certain. 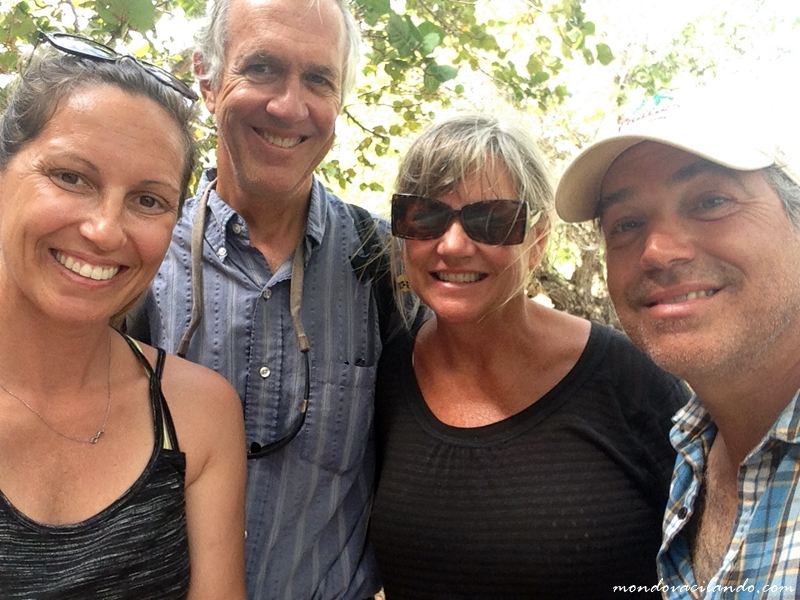 There is no wifi, so we couldn’t get weather reports on our phones. We couldn’t even pick up Key West on our VHF for weather and that’s weird because we can usually pick up within 100 miles. Other boats in the anchorage had difficulty getting NOAA weather on their VHF as well. We don’t have an SSB radio on board, so the only weather we could get was via our Delorme InReach. Each morning, the park rangers posted an updated seven day forecast which was a great help in corroborating what we found via our forecasts.

For the most part, the anchorage is exposed to everything except the north and northwest. It can be crowded and sometimes you can’t put out the full scope one should have out to be prepared for a blow. When the big blow came through on our second night, it took everyone in the anchorage by surprise. 40 knots of wind and rain that swings the boat around at 2 am will put the fear of God in you. If it doesn’t, you’re a fool.

I watched a Catamaran drag off into the darkness, and not a person stirred on deck. I had my engine running and my nav lights on along with one other boat. Where I was planning on motoring, I have no idea. It’s all reef. All told, our Mantus drug about ten feet when the wind veered from the ENE where previously it had been all day from the south. I guess she popped out and then promptly dug back in. Oh, how that warms my heart.

Dry Tortugas National Park is an amazing place that should be seen and appreciated. We love that it’s in its natural state. There are no signs warning of heights and dangerous areas. No railings or glaring yellow and black stripes alluding to danger. It’s unmolested and it should stay that way.

We’ll go back at some point, that’s for sure. We missed the loggerhead turtles and the lighthouse on Loggerhead Key. We also didn’t dive the wreck that’s close by but we did enjoy the fort and the people who take care of it. The park rangers are great. Very informative and a joy to speak with.

Anyway, the Tortugas were a fantastic way to decompress and wait for the right weather window to cross the stream into Cuba. We spent three glorious days drinking coffee, reading, snorkeling, and watching the world go by. Then on the fourth day, the winds were in our favor and it was time to go. Havana here we come!