November 1 is a very big holiday in Guatemala and Latin America. Some call it Día de los Muertos (Day of the Dead). Others call it Día de Todos los Santos or All Saints Day. Many believe on this day, two worlds mesh and become one. Where the spirits of the dead return from heaven to communicate with family. In return, families prepare a local dish called Fiambre and gather by the grave of their relatives to celebrate.

The celebration culminates with the festivals of kites in Sumpango and Santiago. After weeks of preparation, locals gather to assemble and display the enormous colorful kites. This festival began in these cities about 40 years ago, but the tradition of building and flying the massive structures is an age-old practice rooted in Ancient Mayan culture. 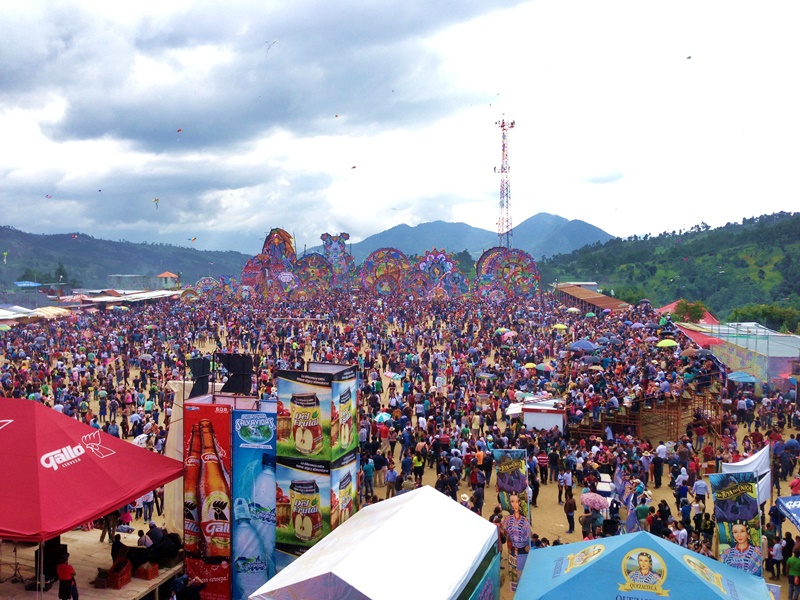 Known as “barilletes gigantes” in Spanish, the giant kites of Santiago and Sumpango are incredible works of art constructed with cloth, tissue paper, and bamboo. Most of them contain religious or folkloric themes. The smaller kites range from 3-4 meters (9-12 feet) across and are the only kites that attempt to lift off in the afternoon. It’s harrowing to watch as they lift off, dip and dive over spectators and then rise; slowly drifting over a dramatic landscape.

Many believe that on this day, their dead relatives return to “check up on them.” Some attach messages to their loved ones to the kites hoping that the messages reach the heavens. Once the messages are received, the wind will tear the kites to pieces, which is symbolic of life and death. The kites are then brought back down and burned. The smoke helps guide their loved ones back up to the heavens. These days, it’s become more of a competition to see who can build the largest, most beautiful kite with prizes being awarded to the winners. 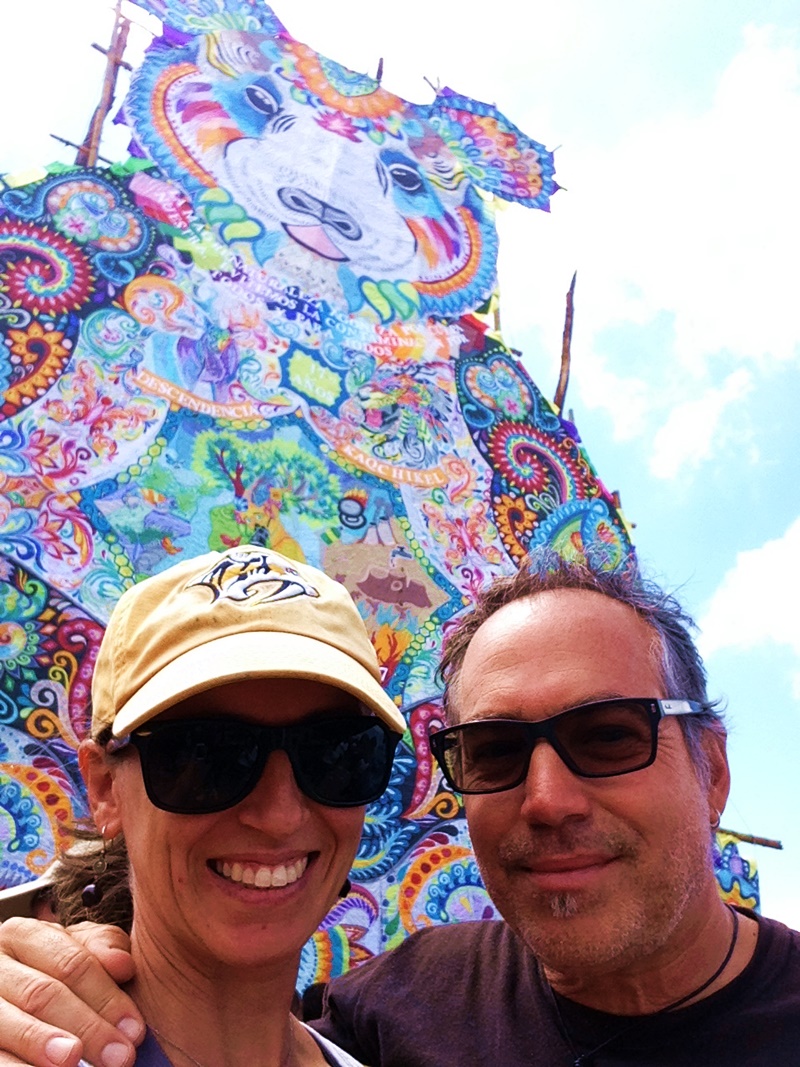 The largest barilletes can be up to 24 meters. That’s over 70 feet! These big boys never leave the ground. They’re assembled face down on the dirt. Once done, the locals gather around to watch as many more make ready the lines and hoist the masterpiece to a vertical position. The reveal is exciting. The crowd goes nuts with much-deserved appreciation. 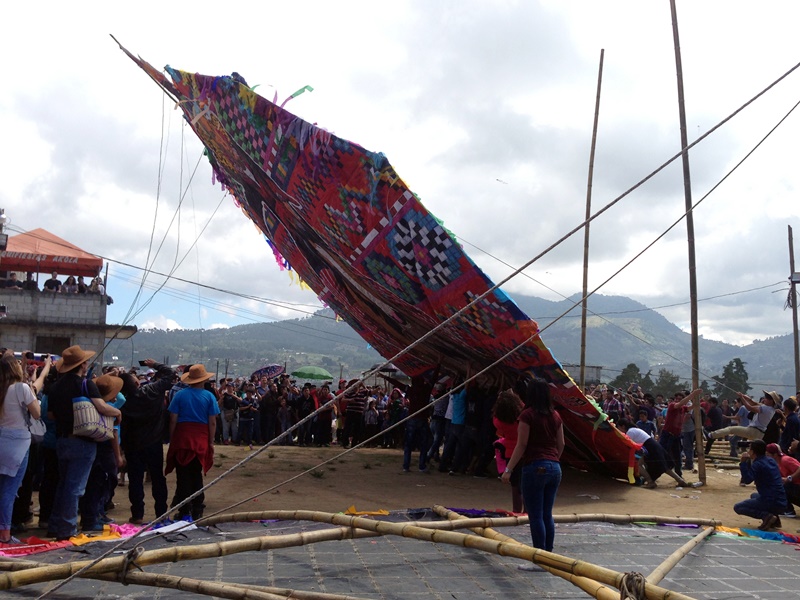 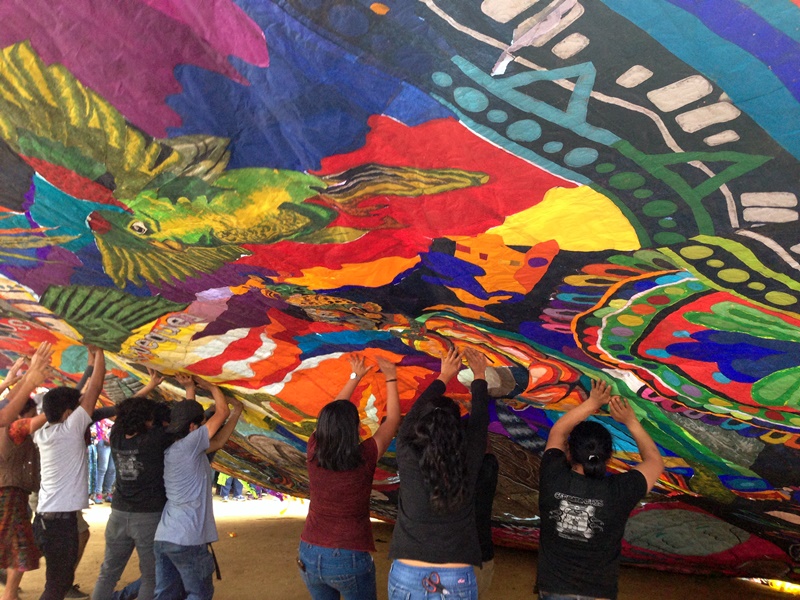 We chose to visit Sumpango rather than Santiago. It’s a little closer to Antigua. There are tons of options for transportation. Most of the tour companies have vans going. All of the local hostels and hotels also arrange trips and for the bravest of the brave, you can cram yourself onto one of the local chicken buses if you’re looking for a death-defying afternoon.

The organized shuttle we took was Q120 (around $18.00 US). That included transport to and from Sampungo, lunch, and a beer. If you want just the shuttle, it’s around Q75 or $11.00. I will say, the “lunch” was a terrible chicken salad sandwich and bruised fruit but the beer was cold. I wouldn’t go that way again. Having no idea what to expect at the festival, I elected to go the “safe” route.

Once we got there, food was everywhere! Delicious local tacos, burritos, empanadas, roasted corn and pork. Lots of pork. It was cheaper and WAY better than the chicken salad. Mel fed her sandwich to a local stray pooch who… refused it. The beers at the festival were ice cold and cost Q10. That’s just over a buck! 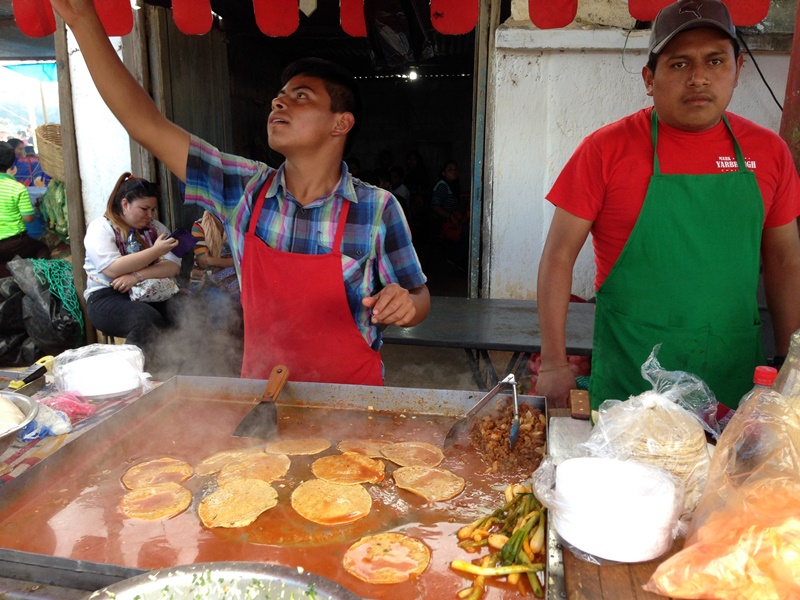 The trip from Antigua to Sumpango is about 29 kilometers. That means nothing on this day because traffic, breakdowns, and weather turn that trip from a 30-minute drive into a one hour commute. Picture Nascar featuring customized school buses, motor scooters with three or four people on them, and small cars vying for the same ten feet of dusty tarmac. Throw in a few bicycles and stray dogs and, well- you get the picture.

Once you “get there,” which consists of the driver stopping the van in the middle of the road to let you out, you’ll be greeted with a 200-foot dirt hill to climb. At the summit, prepare to walk a gauntlet that is 5000 of your closest friends shuffling through a dirt floor alley about 6 feet wide. Vendors line the sides with smoking hot grills and cooktops. It takes a great deal of patience and effort to keep from becoming one with whatever is on the grill. This is where most of the pick-pockets make their daily fortunes.

For someone who absolutely hates large crowds, this was the anxiety moment of the day. Luckily- Melody kept me from losing my mind. In a soft, loving voice saying, “Honey… shut up. Relax… stop pushing me.” Ah… total zen, right?

When that joy ends, you walk out onto a large dirt soccer pitch where you’ll be rewarded for your efforts. Cold beers, tasty rum drinks, and the beautiful kites await. There are plenty of places to sit in the shade if you need a break. Most folks carried colorful umbrellas to protect them from the sun. That was a great idea and one I wish we’d thought of. 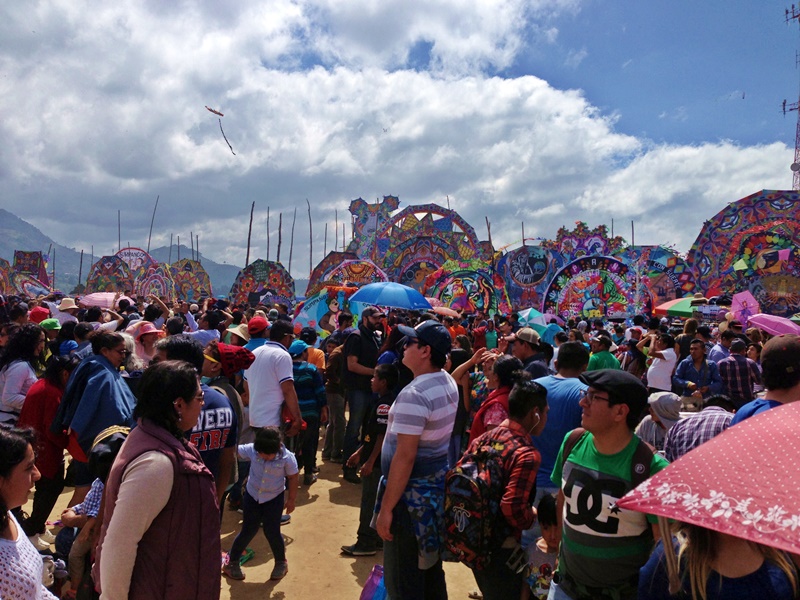 If you’ve had your fill of the kites and wanna actually see a cemetery bustling with the kind of activity only spirits can muster, take the fifteen-minute walk through town to the cemetery. Once inside the colorful walls, you’ll see hundreds of people celebrating at the grave sites of their lost loved ones. The ground is covered in fresh pine needles and, if you’re hungry, there’s a guy selling popcorn. Quite different from the somber tone in American cemeteries. 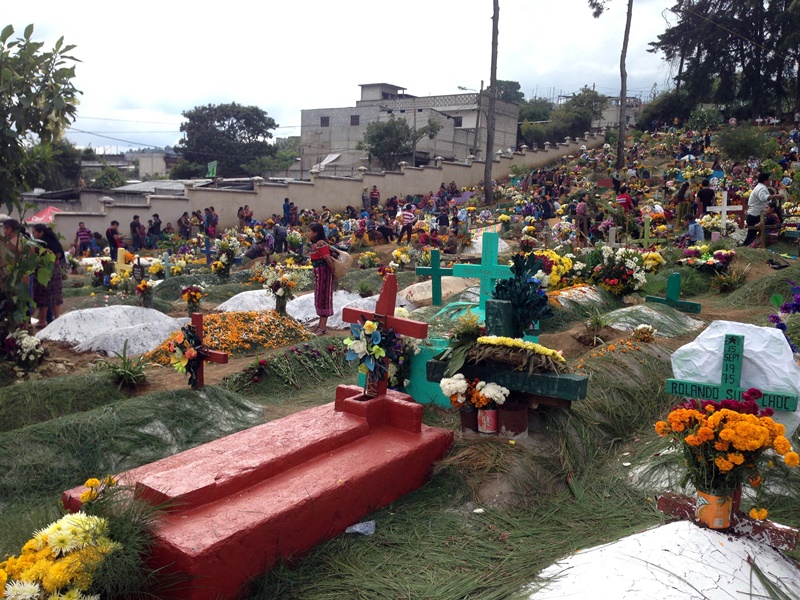 Now, for the security issues. When you google the festival or get to the point of booking a shuttle, you’ll find many people talking about the criminal element. You’ll read how some had wallets, passports, and cell phones stolen. Some will make it sound as if you’re walking into a war zone. You’re not. You’re walking into a small and very poor village in Guatemalan hills. Crimes are crimes of necessity and opportunity. You should behave as you would if you were going to a Soccer game in London or to New York City for New Years Eve festivities. Behave as if you were going to any big event, anywhere in the world where thousands of people are crammed into confined spaces.

To put it simply… Don’t be an idiot. Don’t wear your beautiful wedding ring or Rolex. Don’t wear 4-inch open toe shoes and don’t keep your wallet and passport in your back pocket. Make a copy of your passport if you feel you need to have it on you. Melody has a great sports bra that has a pocket inside. She kept our money in there. Yes, it’s bit awkward when she digs in there to get money for tacos, but hey… whatever works. Who doesn’t like boob money? For the record, we only brought a few hundred Q for the entire day.

To give you an idea, seven Quetzals equal approximately one dollar. Q300 amounts to around $43. We only brought that much in case of emergency. For instance, if our shuttle didn’t show for the ride home and we had to take a chicken bus. I kept my cell phone in my front pocket. Mel also brought a heavy canvas purse that’s about the size of an iPad and incredibly difficult to cut through. In it, we had an extra phone battery and some toilet paper. At no point did we feel unsafe. 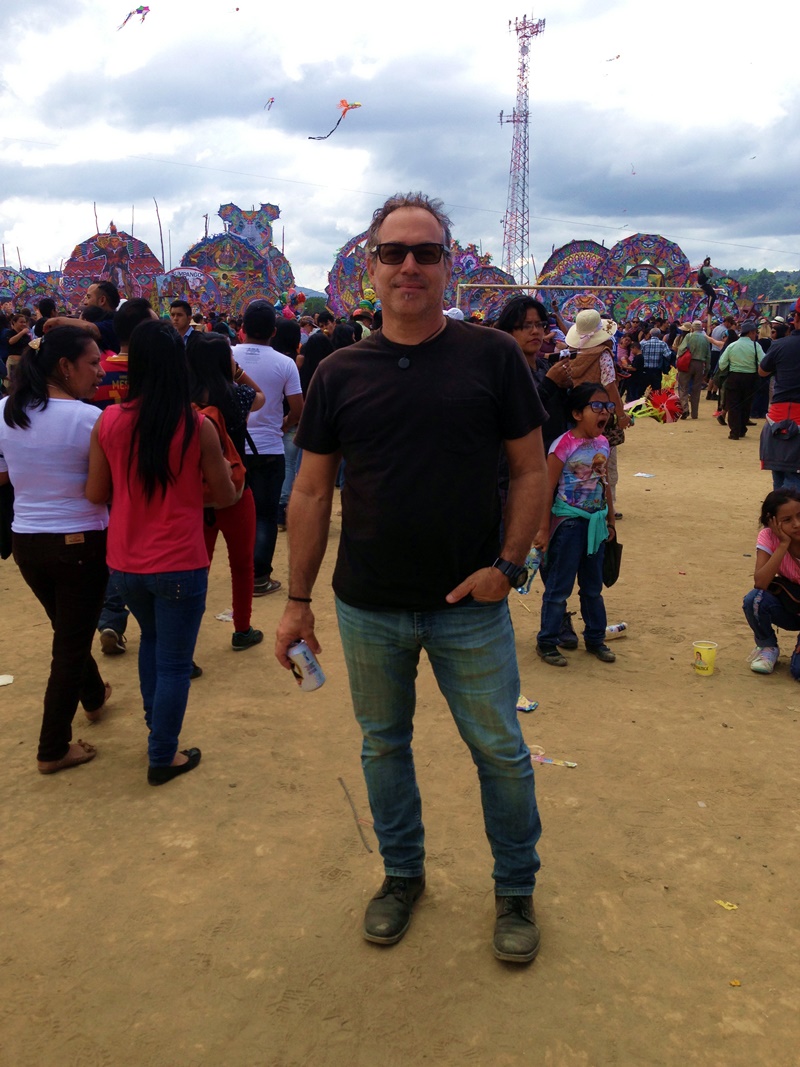 If you have any desire to see Guatemala, and you should, because it’s an amazingly beautiful country, travel during this time and make sure to see one of the kite festivals. It will stick with you forever. If not now, then for Easter, Christmas, or New Years. They know how to throw a party around here.

I can’t speak to the festival in Santiago, but if you go to Sumpango, wear comfortable shoes that are good for climbing hills. Don’t take valuables. Tap into the section of your brain responsible for patience, and then… have a freaking blast.