You know, during the process of writing my new book, which is about cruising the ICW, one of the things I really enjoyed about doing this book was looking back through our notes and log books. It gave me the opportunity to revisit and relive some of the great memories we’ve forgotten about over the last few years. One such memory was our visit to Cumberland Island.

It was during our first trip down the Intracoastal Waterway in the fall of 2012. We had our friend Tommy from Nashville with us, and we had been advised by others that Cumberland Island was one of the “not-to-miss” spots on the ICW.

Once owned by the Carnegies, it’s now a National Park, and you can visit the ruins of Dungeness, the old Carnegie estate, which was destroyed by fire in 1959, and is apparently a site to behold. I had always wanted to visit there because I’d heard that’s where Tom Waits used to go to write sometimes, and it was said to feel as though you were stepping back in time.

We arrived near dusk and dropped our anchor in  about 16 feet of water, accompanied by only a couple of other boats in the nice, quiet, protected anchorage near the dinghy dock at the nature center. By the time we were set and settled, it was dark, and I hopped in the dinghy to take Jet for his nightly bathroom break and walk. We didn’t venture far, and there wasn’t much to see in the dark, so the experience wasn’t unlike other similar trips ashore. That is, until the next morning.

We headed back to the island at first light, before the ferry boat that carries tourists and bicycles from St. Mary’s. The air was crisp and scented with dirt and history. We deposited some dollars into the park service donation box and set out to explore. 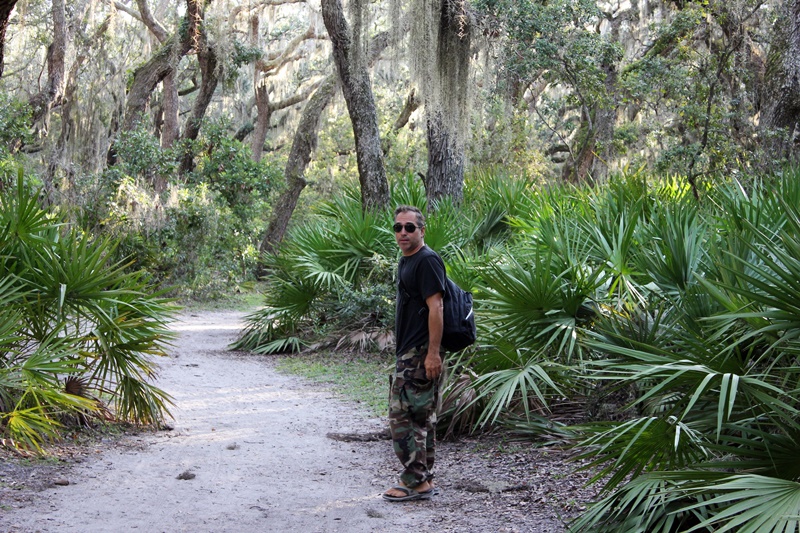 Cumberland Island is a magical place. Stepping foot on the island was like being transported back to a time long forgotten. The plant life is otherworldly. From the moment we stepped off the dinghy, I felt like I was stepping into a scene from Jurassic Park. The live oaks are simply massive and spread like mythical giants. Their limbs are adorned with Spanish moss, dripping like draped silk, providing shade and almost coddling one within their reach. 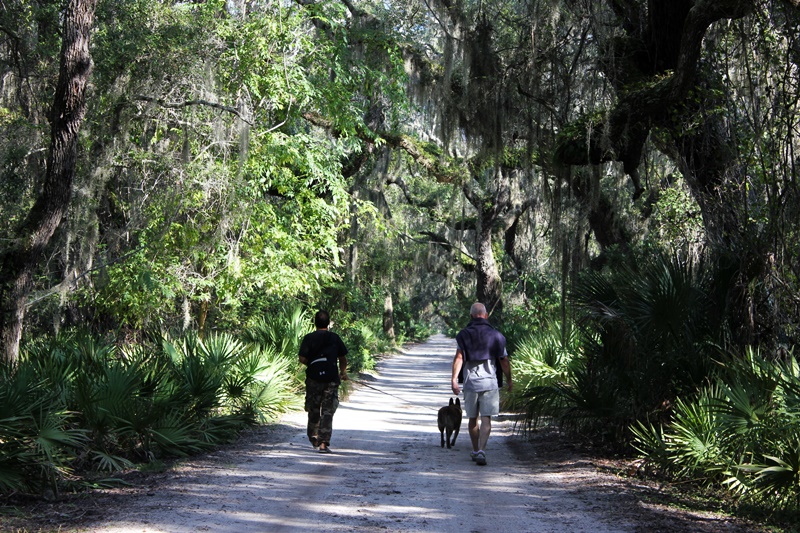 Just a few minutes in, we spotted a few deer, who didn’t seem to be terribly frightened of our presence. The island is also home to wild turkey, feral hogs, and one of the world’s largest populations of loggerhead turtles on the island, in addition to the feral horses that roam freely. 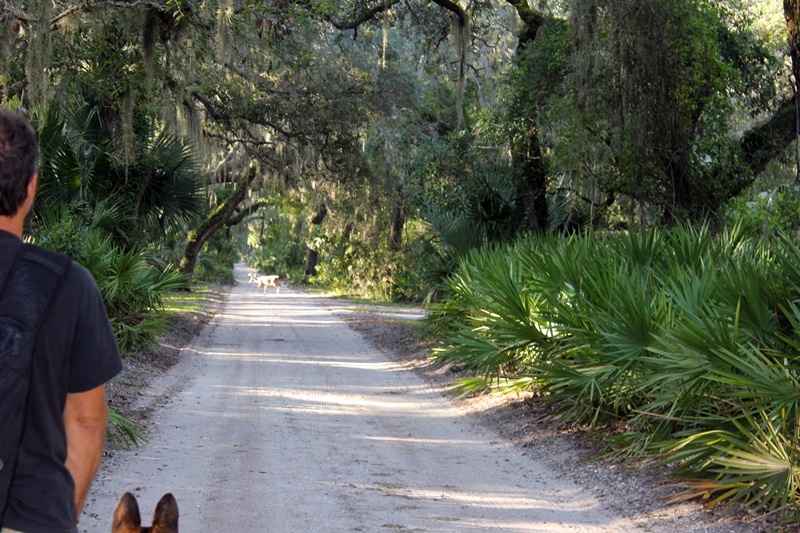 Once we arrived at the mansion ruins, we were again awed by the immense scale of the place. Even though it was mostly destroyed by fire, the remaining facade was still spectacular. The last known use of the property was in 1929 and it was abandoned during the Great Depression and sat for 30 years until it burned down. 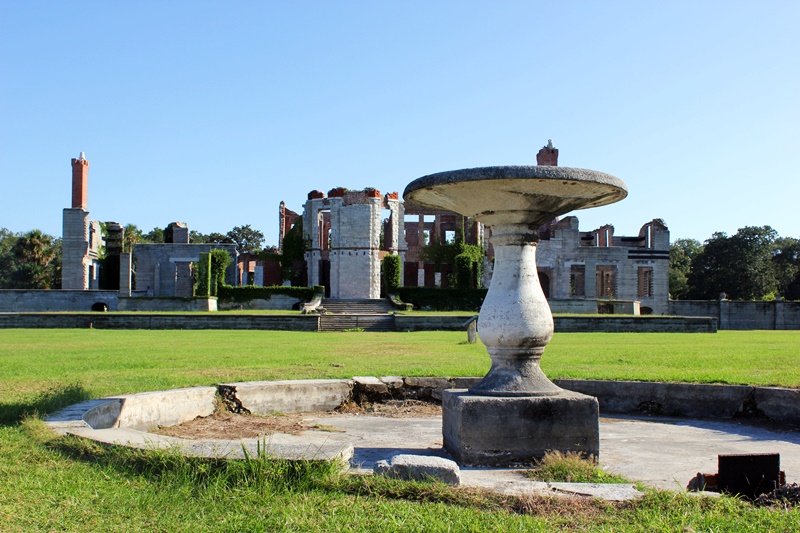 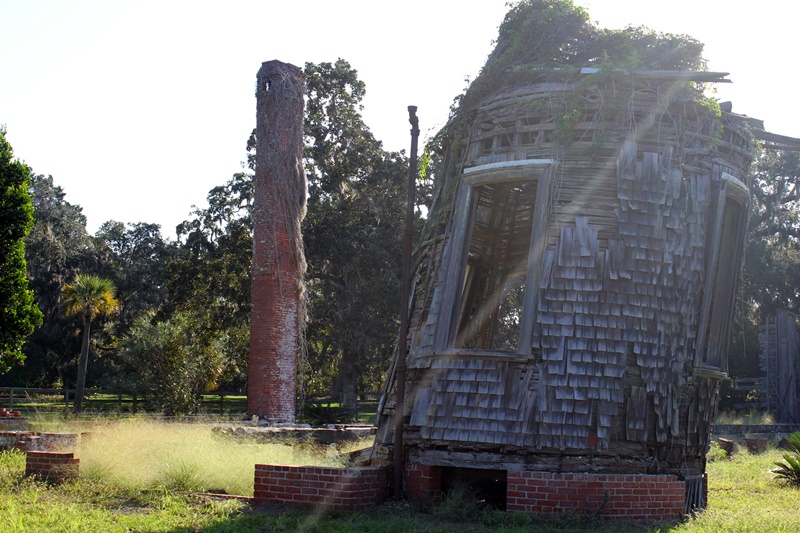 We imagined what it would have been like back when the Carnegies lived on the island… the parties, and the guests that frequented the island at that time. Old cars still sit right where they were parked, now rusted out, but otherwise untouched. 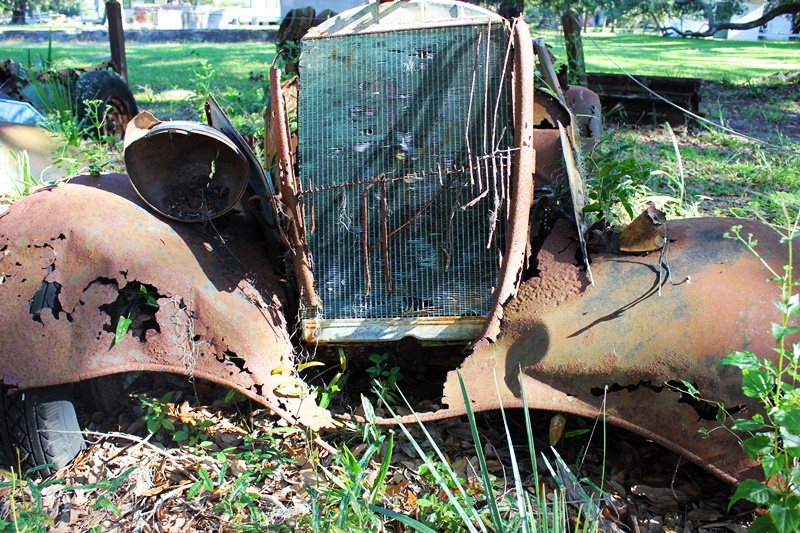 We watched as rafter of  enormous wild turkey scattered into the brush, and after absorbing what we could, we hiked south towards the beach at the end of the island.

The scenery changes almost instantaneously as you cross over the dunes on the path towards the beach. Rather than the prehistoric palms and spanish moss, it turns into sand and old driftwood trees — not nearly as large and magnificent as the ones on nearby Jekyll Island where we got married, but still just as picturesque. 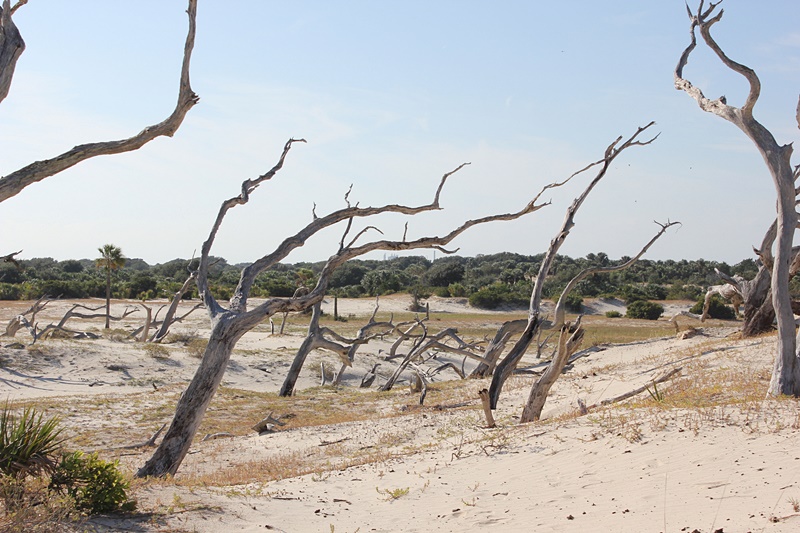 Our trip to the beach was cut short because Jet kept getting sand spurs in his paws, so we decided to head back, as we knew the ferry would be arriving shortly anyway, bringing crowds of tourists.

As we slowly walked back, we stopped suddenly when we saw two wild horses heading our way, seemingly a mare and her foal. We didn’t want to frighten them, but we were definitely glad for the opportunity to have a closer look. Jet, like us, sat completely still and mesmerized, ears up and on full alert, but as quiet as a church mouse. Melody, never wanting to miss a good photo opportunity, but not wanting to make any sudden moves, slowly took the lens cap off the camera that was hanging around her neck, and without lifting the camera from where it hung, started quietly snapping photos. 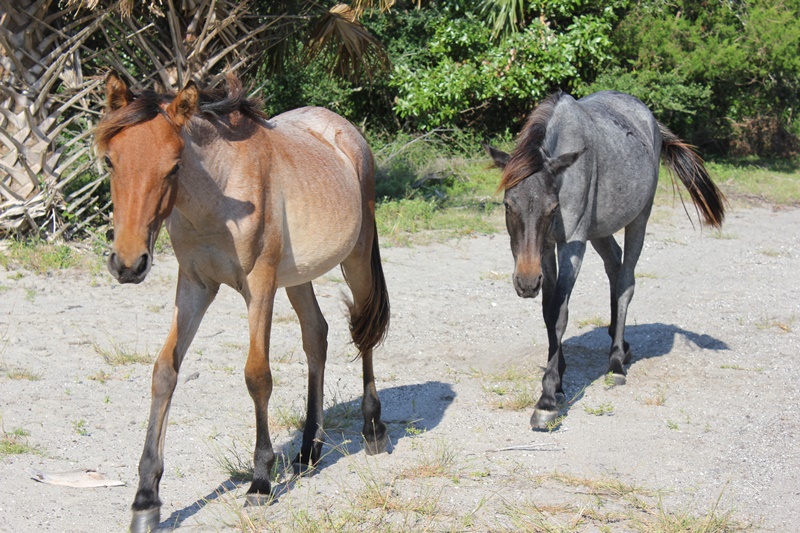 The horses continued towards us — they were thin and lean, with ribs showing, but not so much that they looked as though they were starving. They looked as what I imagine wild horses would look like. Their heads were down as they walked, indicating their shyness, but they didn’t seem fearful. This was proven when they came within inches of Melody’s sleeve for a quick sniff before continuing on their way. 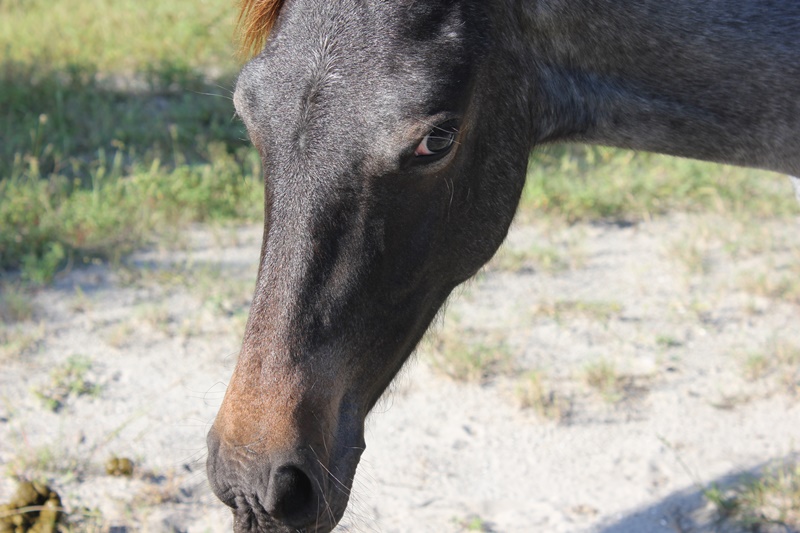 Today, Cumberland Island is home to over thirty homesteads that were built by decedents of the original island settlers. They clustered the homes in small compounds that tend to face the marsh areas so as not to disturb the rest of the island.

If you want to visit Cumberland Island, I highly recommend doing so by your own boat, and exploring before the 10am ferry. The anchorage is protected and gorgeous. There is a dinghy dock for landing and the ranger station has a donation box for your contributions. The suggested donation is $4. Chuck some dollars in there and help preserve the place. If you don’t sail in, you can arrive via the National Park Service ferry. There are numerous camp sites on the island as well as the historic Greyfield Inn. For more visitor information, check out: cumberlandisland.com.