As spring 2010 arrived we were way behind.  The economy was now full on in the shitter. Stock market down, housing market collapsing and my job in serious jeopardy.  The thought of spending more money on an old boat grew even more daunting.  I mean lets face it… one could pick up a Tartan 27 online in decent shape for around 5k.  I’m well over that with this project and the end is not in sight.  But alas, we soldiered on. The prospect of buying a newer, bigger and more expensive boat was less attractive than finishing what I’d started.

So… with all of the thru hulls done, it was time to continue with the decks.  Moose had been under cover since December and now it was time to get these things fared and painted before the dog days of summer hit.  We pressed on day after day and spent every weekend out there in pursuit of a smooth deck with no ripples or bad seems. After many, many hours of sanding and mixing epoxy, we achieved that.  As most of you know who’ve done this job… it is a bitch.  When you think you’re done… you’re not. 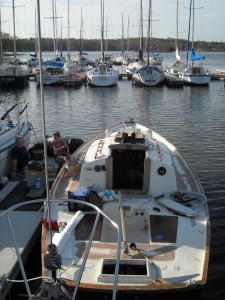 The photo to the right shows Moose just prior to deck paint. She looks rough but structurally she’s in fantastic shape. The hatches, both front and rear were being rebuilt and varnished along with the coamings and grab rails.  I tried to use the original grab rails but many years of sanding reduced them significantly and when I screwed them back in, they split out.  As for the interior, we pulled out all the shelves, cabinet doors, head, holding tank and plumbing. We replaced all the hinges and knobs and I cut backing plates out of half inch Mahogany for all the stantion bases and deck hardware as well as the winch bases.  The Atomic 4 had been replaced by the previous owner with a Yanmar 2GM20F. She’s got about 800 hours on her and she purrs like a kitten. 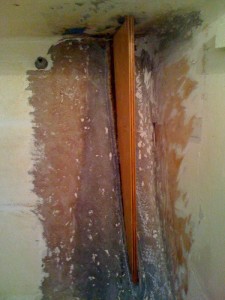 Here you can see the chain plate template for the head to port just prior to getting her all glassed in with biaxial cloth.  I had the original chain plates checked out for stress cracks or elongation and they seemed to be fine.  So, after a good polish I bolted them on the outside of the knee, as they should have done in the first place!  Now, if we get water in, we’ll see it.  After all was said and done, this past March 2011 made it just about 2 1/2 years that we had into her and I couldn’t believe how much time and effort went into a boat that was less than 30 feet.  At she stands here, she’s got new deck core, new chain plate knees, thru hulls, centerboard pendant, new bottom, new hoses, electrical and electrical panels, fresh paint and a bankrupt owner!  Emotionally and financially…

To the right is the glassed in chain plate as she looked before paint.  Came out pretty nice if you ask me. 6 layers of Biaxial cloth which has a layer of mat covered by 2 layers of cloth stitched together at 45 degree angles to each other.  So in actuality there are 18 layers of glass here.  God help me if I ever need to remove this.  As this summer ends, we’ve finished painting the whole interior of Moose with an oil based Alkyd house paint.  It was smelly but way cheaper than the interlux stuff and it came highly recommended by those in the know. Don Casey as well as many marine people I spoke to said it will hold up longer if done right and it’s tough as nails.  That said, Moose has a fresh white interior, new shelves and cabinetry.  We rebuilt the companionway ladder as well.

We recently spent the night out on the ball with a bottle of wine and a movie.  It’s been almost 3 years worth of blood, sweat and tears.  I usually stay as far away as I can from cliche’s but in this case it rings true.  I have scars on my knuckles, knees and skull to prove it.  I’ve poured buckets of sweat into that bilge and the tears… well, there were many nights that I thought to myself… “what the hell am I doing?  All this money and effort.  20 thousand dollars on a 5 thousand dollar boat.”  Oh, there were tears. But now, although we still have work to do, there is a vision making itself visible through the fog of “someday.” I still have to suss out some electrical issues but inspiration is rising.  It’s time. Moose must make way and by God… come hell or high water and most likely both, we’ll sail.