If you’re not familiar with CHBS and you’re on a boat anywhere near the west coast, you need to be. The reviews online tout it as a premiere do-it-yourself yard that is extremely reasonable. I will tell you after our experience there, it’s true. It’s family run, incredibly clean, and well appointed (for a boat yard). The “tenants” (for lack of a better word) were extremely nice from the moment we hit the dock. My only complaint about the place is getting to it is like getting into Fort Knox.

On the Friday afternoon we were scheduled to haul out, as we beat our way north, we had the notion that we’d just barely make our appointment with little time to spare. We rounded the northwest bend into the upper reaches of Charlotte Harbor and Melody and I both noticed the large, low bridge crossing that looked to mark the end of the line. One lonely green marker stood to port marking a shoal.

Mel said to me, “There has to be a channel over there, right?” In my mind I was thinking yes, but my real time vision was providing no clues.

“Sure honey. The charts show a small channel over there and I guess we’ll see it as we get abeam of it.” And… at last, we did.

That channel couldn’t have been more than twenty feet wide. We came into it on a rising tide and nervously saw just over five feet. We draw five feet.

I phoned the boat yard. I wanted to tell them my position and ask for any local knowledge about the channel and the hand-operated lock we’d heard about, which was yet to be seen. Lisa answered and was a bit blasé, simply saying, “nope” when I asked, “is there anything I need to know about this channel? Any preferred route? Side?” Her exact words were, “You draw five feet? You should be fine.”

That was about five seconds before we stuck fast into four feet of mud, 50 feet from the now visible, hand-operated cattle lock on our port side.

A sailboat with a young man on the bow and another man driving was coming through the lock so I hailed them on radio to tell them we were hard aground. There was little room for them to maneuver between us and the mangroves just outside the lock. The excited young man was bouncing around the deck like his feet were on fire.

After many failed attempts to raise them on the radio, I yelled, “Hey! You got a radio?!” The young man said, “Yes!” to which I replied, “Can you turn it on?” (I left off “dumbass!”) He yelled back, “It’s my first lock! I just bought the boat!” The dialogue went on for a scant few seconds until I asked, “Have you got a depth gauge on that new boat?” “Yep!” he said. I actually had to say, “Can you tell me what it says?” “Five feet!” He was about five yards off the mangroves and ten feet off my port side, and he was in five feet. Mel and I were in 4. How ironic.

We sat for a spell in a rising tide and managed to get off without further incident. The hand-operated lock was the next conundrum we had to transit. The rusty chain, no thicker than a cheap dog leash, hangs from the wall along with some small hemp ropes for gripping in an effort to steady the boat. With one hand, Mel tugged down on the chain. With the other she held the raspy, hemp rope and tried her best to keep the bow from swinging into the turbulence. I had the stern but laughing as we were, neither of us were quite successful. If you saw us, you’d have thought we, too, just bought the boat.

The whole event took about a half-hour and no, we didn’t close the lock behind us on the other side. We were kind of flustered by the whole convoluted scene. Some fishermen tossed us a look of consternation as I motored away. Sorry, boys. You close it. Put down your Budweiser ICE and pull the chain. We’re off to make our appointment on the lift.

“Hello, Lisa? We’re through the lock.” It was then she informed me that we still had an hour-and-a-half through the canal to the boat yard and that they closed at four o’clock. My G-Shock was reading three. Then she graciously said to just tie up at the outer dock and that she’d leave us a key to the gate along with any particular information we needed to get through the weekend. It would be Monday before we’d be hauled out. “Okay, thank you Lisa. One more thing. Is our tie up going to be a port or starboard tie?” Lisa said, “Port? That’s left… right?”

I have to say, the trip, once through the lock, was beautiful and unexpected. The Interceptor Canal that leads to the yard is gorgeous and full of life. I would make the trip again just to anchor in that spot for a weekend.

Towards the end of the canal, there is a red marker that will give you pause, as it seems to nudge you right up onto the bank. Thankfully Melody had seen a note on Active Captain that mentioned wanting to take that mark to port because it looked so out of place but take heed, friends, leave it to starboard when you’re coming in, and don’t think about the muddy bank and swamp grass lapping your hull to port. Once through, ’tis a lovely ride to the small dock and a batch of wonderful people who’ll extend their hospitality from the moment your feet hit the ground.

Dean was the first guy to take our spring line. He ended up coming to the boat later that week, sharing some wine and a few beers as well as his stories. He took me to Home Depot on more than one occasion. He took Mel to the market for a bit of provisioning, and on one lovely evening, he clued us into his favorite place for Chinese. Dean is an amazing guy and a talented writer. In the nine days we spent on jack stands, I grew to enjoy my encounters with him and reveled in his stories and storytelling.

Rick, Sue, and Boogaloo (their awesome dog) were in the yard aboard their CAL 35, which they brought around from San Diego! Amazingly kind folks who offered up their assistance as well, and gave us a letter to deliver by hand to a friend of theirs who owns a bar in Isla Mujeres when we get there. Rick told us the letter would be worth a couple of free beers.

We got a really cool surprise visit from a blog follower and yet another CAL 35 owner, Jim Marinelli. Originally from Maine, Jim and Judy (his lovely wife) relocated to Port Charlotte and brought along their CAL. They had us over for a wonderful evening of food, drinks and conversation about our venerable vessels. So there we were, in the back woods of Placida, Florida making those connections that make it incredibly difficult to leave a place. Melody and I were saying, “ We gotta get this boat done and get outta here or we’ll be stuck for another year!”

Amidst the sanding, painting and toting all our dirty dishes down the ladder in a bucket to wash with the hose, we also had a lovely surprise from our friends Martin and Angela aboard s/v Mystique! Knowing we were missing the Sunday Power Hour at Fish Tales in St. Pete, they packed up some mimosas and brought Power Hour to us! Thanks, guys. It was a much needed break. Living on the hard is incredibly difficult, especially with a 50-pound dog. 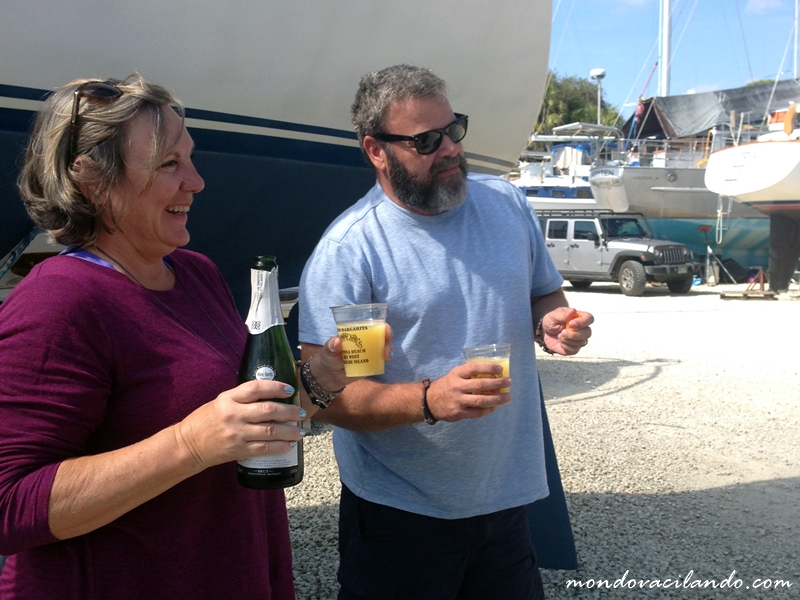 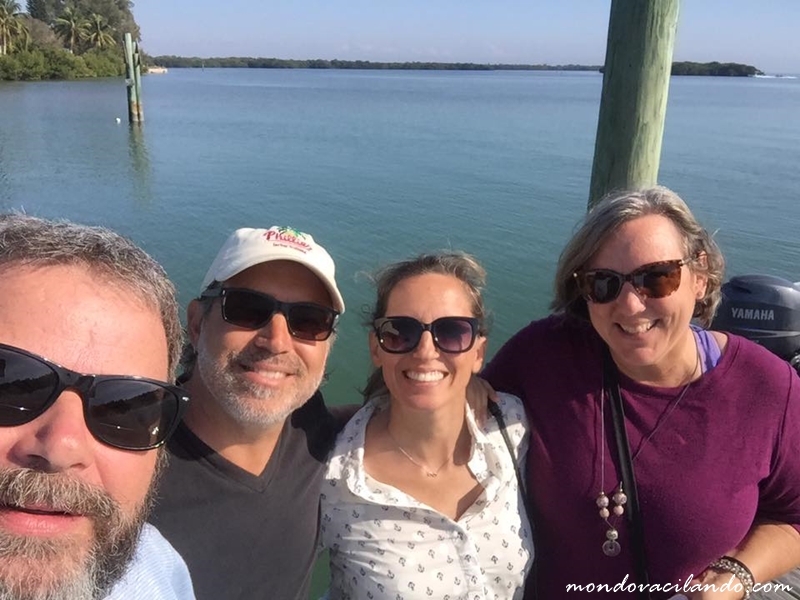 Speaking of dog, the process of getting Jet up and down the ladder was tedious and stressful. He’s named Jet, but sadly, the mutt can’t fly. He’s a trusting soul and in the end, it all worked out well, but I think we’re both glad it over.

Not being able to use the sink or the head is a pain in the butt. Climbing the ladder ten or fifteen times a day will work the quads though. It’s all about the silver lining, right?

Anyway, friends… with a fresh bottom and a rested crew, Vacilando went back into the water and pulled away without delay. For the first time since we moved aboard almost five years before, we were truly Vacilando. The boat yard was our last hard time commitment, and now it was behind us, literally.

Finally, we were traveling with a destination, but neither Melody nor I cared much about when we’d arrive. The boat moved like she was on ice. She was smooth and gliding along as eager as we were. Jet laid on the port side lazarette, eyes closed, not a care in the world.

Vacilando got back through the cattle lock and out the claustrophobic channel on a hide tide. The only thing indication we’d ever been there was our trusty space heater. We left it on the floating dock. A memento to the climates we were hopefully leaving behind for awhile. Good luck, little heater. I hope you find a chilly cabin or backwater fisherman’s heart to warm.