Well folks… I should have never stated “Monday” as my blog day. As soon as I did, the whole schedule went to crap. You know what they say about “good intentions.” That said, this was the week and what a week it’s been. With the house closing locked in and done, I readied for the trip to Panama City for the boat survey while Melody went through scores of boxes and plastic totes to decipher what we were keeping, selling, donating or storing. I drove to Panama City… again… on Sunday for the survey on Monday morning. Now… If you don’t know what a survey is, think “Home Inspection” for a boat. Same thing, only different. You have to haul the boat out of the water so the surveyor can see and check the bottom for any number of problems such as blisters (bubbles in the fiberglass), keel de-lamination (look it up), cracks, corrosion, etc… It’s nerve wracking and expensive. $350.00 bucks, plus $50.00 to pressure wash it, plus tax. All told, $454.00 for about 1/2 hr. on the 70 ton lift.

Surveyors are like every other profession on the planet. Some are good some are crap and some are well… completely indifferent. When you want the best guy, you gotta dig. Call locals, ask questions, read reviews and, if you can, get a copy of some of the survey’s potential hires have done. I found a company that came highly recommended and when I called, I knew I had the right guy. Capt. Rick Corley from Capt. Tom Corley and Sons Marine Surveyors. Capt. Rick has to be in his early to mid-seventies. His father just past away at 93 years old and surveyed up to about six months before his death. Capt. Rick has been surveying boats for over 55 yrs. When I called him on the phone to discuss the potential survey, he kept me on the line for over an hour. He asked me more questions than I had for him. It was enlightening and put my mind at ease. But… It’s nerve wracking and expensive. $560.00 bucks. Actually that’s cheap compared to other quotes I got that were in the $650.00 area. It’s all priced by the foot. At 35 feet, my days of cheap bottom jobs, trailers and haul-outs are officially over! 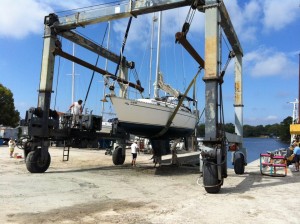 Now Capt. Rick can talk. Boy can he talk. If he didn’t give me so much damn information that I needed, I would have been exhausted and frustrated. As it stands, I’m struggling to read his nineteen page survey! He is former military and very, very detailed. Well worth the money. We met at 9AM, did a quick look around, met the broker, the owner and the owners wife. We had a quick look around, fired her up, backed her out and drove her by motor to the haul out facility about 45 min. by water. This gave us the opportunity to check the auto-pilot, engine cooling, steering, etc. When we got to Bay County Boatyard, they had the lift ready and pulled her out without incident. Everything looked good with minor “issues” such as she needs new bottom paint and zinc, which I knew. Then, I paid the large sum of money to watch her descend in the sling and travel back to the marina where we broke for lunch, which I bought. After lunch, we went back to the boat and eventually, around 3PM finished up. I wrote yet another check to Capt. Rick for his services and sent him on his way. Then, I wrote another check to the broker (Who I’ll remain tight-lipped about until I have the keys in my hand… 10, 9, 8, 7, 6, 5… deep breath) and still another check to the owner for allowing me to keep the boat in his slip for the month of April. At which time I’ll take her back to Bay County Boatyard for the bottom job and yes… another check. That sucking sound you’re hearing? My bank account.

With the survey process done, I drove home Tuesday. I’m now at work trying desperately to do… my job. Yeah, that thing I have for two more months? They actually expect me to accomplish something during that time. I now get to deal with “that Broker,” an insurance agent and the U.S. Coast Guard. I’m going to have the vessel documented… don’t ask. More paperwork and yes… cha-ching… another check.

So this is the point at which I go against my natural inclination to second guess everything. You know, when the craziness ceases and there is calm or, relative calm. Okay, not calm but less crazy than before? The voices creep in and say, “Did I just do something really stupid?” Yeah, that voice. NOT the Clint Eastwood voice. This is more like David Spade-ish. This voice is just my “old self” questioning the “new self”, trying to upset the apple-cart. Thing is… the “old-self” doesn’t know just how sick the “new-self” is with the “old-self.” As we age, or should I put this in terms of me and me alone… as “I” age, I find that tiny sliver of self doubt gains traction and likes to sabotage my attempts at “happiness” or whatever word you’d like to insert. But this little “adventure,” our “journey” is pretty iron clad at this point. We’ve sold the house. I’ve given notice at work. We’ve spent a very large sum of money on our next dwelling and it’s PAID FOR. Our cars are paid for. Pieces of shit mind you… But PAID FOR. The dog? Jet-pack… PAID FOR. Although he’s getting a little needy… But the broader point is; this snowball is rolling. It’s growing and rolling faster and faster towards some locale way down the hillside. And “old self” take heed… You’re in the F’ing path.