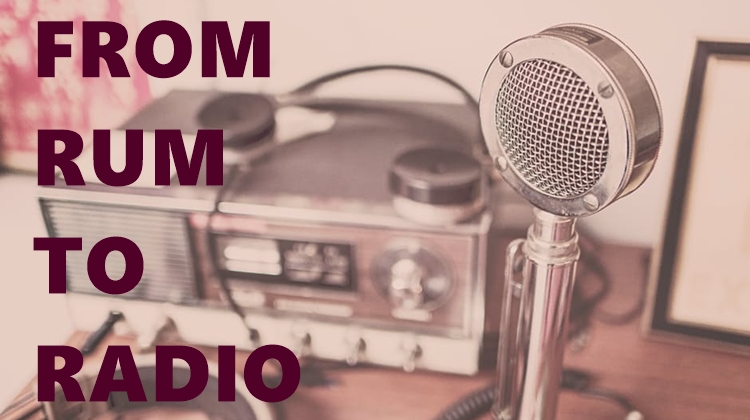 This is a guest post by our friend and talented radio host, Mike McDowall. You’ve probably heard to him on his popular show, Boat Radio, a podcast where he interviews fellow boaters, asking them to share their wisdom and insights into this crazy thing called boat life, so we’re honored to have him share a little about himself and how Boat Radio was born here for you. Take it away, Mike!

Back in the late nineties there was a series of commercials for Bacardi rum on UK television. The ads featured a super-cool DJ called Ray, who presented a show for a fictional broadcaster called Reef Radio. Ray sat in a sunny room in an old factory building in what looked like it might be Havana or San Juan. He had a fan whirling on his desk, a pair of big old reel-to-reel tape players rolling behind his chair, stereo turntables close to hand and a vintage RCA microphone suspended in front of him. He was good looking, laid back, quick to smile, popular and possibly a little bit drunk or stoned. But mostly he was really cool. Like, sub-zero.

I really wanted to be Ray.

At the time the commercials were broadcast, I actually was a radio presenter and I did have huge reel-to-reel tape players rolling right next to me, but this was in rainy London rather than a fictional Caribbean island, and in anodyne soundproof studios rather than a shabby but beautiful old building. I didn’t play music – my shows were all news and current affairs – and I spoke into a cheap headset mic plus, I worked pretty terrible hours and travelled to the studios aboard Tube trains packed with people who looked downtrodden and spent.

I longed to live somewhere sunny; somewhere people were happier.

It took me a long time to get here – nearly two decades, in fact – but I now live on the beautiful island of Mallorca, where the smiles are bright, the colours are bold, the weather is wonderful and there’s a fiesta just about every weekend.

My wife and I moved to Mallorca last year, in search of a better life for our daughter Molly, then three years old. Molly is now four and spends her days at the beach or in the mountains, surrounded by kids of many nationalities. She speaks three languages, swims like a fish and has a new baby sister called Martha. Life is good.

Mallorca is roughly halfway between Barcelona and Algiers. It is the largest of the Islas Baleares, an archipelago that includes Ibiza, Menorca, Formentera, Cabrera, Dragonera and many more much smaller islands. Although part of Spain, the language of these islands is Catalan, which is spoken by around four million people at the western end of the Mediterranean. 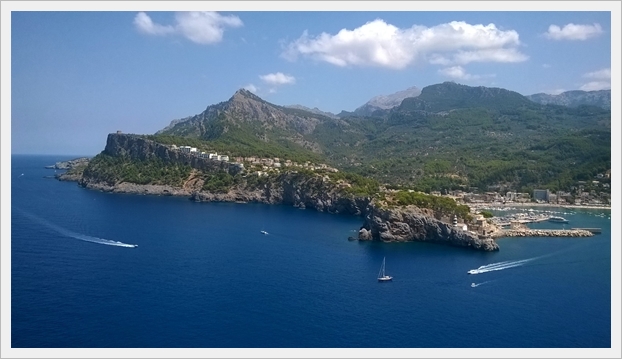 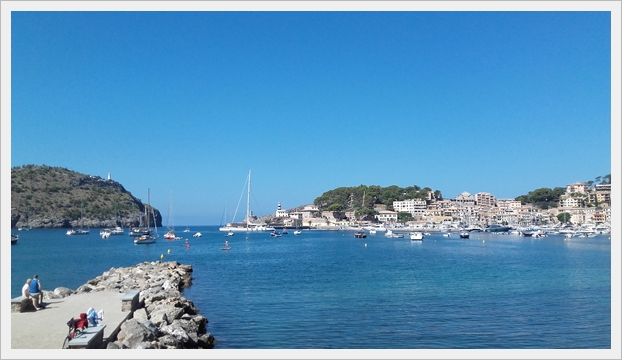 A few years ago, when island life was still a dream, my wife asked me what I would do for a living if we eventually made our escape plan work. The answer was simple: I would continue making radio programmes. I started in radio in 1993, reading the news for a small network which covered three counties in southern England. I was paid £700 per month – roughly $1,250 in today’s money. Yes, you read that correctly. Such was the demand for jobs in the media, the owners of the station were able to exploit newcomers to a ridiculous degree. To add insult to injury, I had to set my alarm for 3:45am because my working day began at 5:00am. It was absolutely bloody awful. I stayed there for just over a year and then moved to LBC, London’s best-loved talk station. LBC collapsed around my ears shortly after I started working there. Since then I’ve spent most of my time working for various arms of the BBC and, despite being an inveterate slacker, I have worked on some of the best and best known news and current affairs shows on radio, both behind the mic and in front of it. I’ve made quite a lot of television shows too but TV doesn’t hold a candle to radio. I love it.

I have always loved boats too. Recently I stood for nearly half an hour on a pontoon in Palma de Mallorca, gazing at Shamrock V. She’s a J-Class, built in 1930 by Camper and Nicholsons for Sir Thomas Lipton’s fifth attempt to win the America’s Cup. She is like something from a fairytale; a vessel of almost ethereal beauty. I was mesmerised. But I’m not only drawn to the supermodels of the boating world, I love boats of all types and sizes, even car ferries and dredgers; battered old barges and tugs. That said, if I won the lottery, I would immediately order a Shelter Island Runabout and a Spirit 46 Classic. Actually, if it was the gargantuan Euromillions lottery, I’d order something flash from Wally too. Of course, then I’d need somewhere to keep all the boats – maybe a house with a private jetty or two and… well, you can see where all the money would go.

Boat Radio began as an idea for a weekly slot on an established local broadcaster here in Mallorca but it very quickly became clear that none of the radio stations were interested. The idea grew in scope and, in the end, because I could drum up no support from other media outlets, the only option was to start my own radio station.

That was the plan anyway. It didn’t quite work out like that.

On July 1st Boat Radio came to life as a continuous audio stream, accessed via a bespoke mobile app. But it quickly became clear that I could not maintain such a complex, fickle and voraciously hungry channel without a substantial staff. I sat in my garden, in the scorching heat of the Mallorcan summer, frantically editing and uploading radio shows. At the other end of the garden table sat James Finlayson – formerly of BBC World Service – sweating profusely, editing maniacally and, like me, wide-eyed with caffeine. There were simply not enough hours in the day.

In the end, the audience saved us. The listeners made it clear that they did not want a conventional, scheduled radio station. Instead they wanted a catalogue of podcasts. So, that’s what we have created. Right now, there are 155 shows to choose from. They’re made in Florida, Missouri, The Bahamas, the Arctic Circle, Annapolis, the United Kingdom, Australia and, of course, Mallorca, the boating capital of Europe.

Each week, The Life Aquatic focuses on a family, a couple or an individual who has quit the rat race, sold up and sailed off into the sunset. The Wheelhouse covers all manner of fascinating people and subjects, from Tom McClean and his giant steel sperm whale boat to the ingeniously simple Seabin Project. Michael John’s Tales of the Thames introduces us to the people, the places and the boats along London’s mighty artery. Medical Emergencies at Sea is essential listening for those contemplating ocean voyages – host Dr. John Ross has three decades of experience providing urgent care in remote locations and hostile environments. If you’re interested in how mankind got started on the water then you must download Brandon Huebner’s wonderful lecture series, The Maritime History Programme, which begins at the beginning in ancient Mesopotamia. Carolyn Shearlock’s brilliant programme, The Boat Galley, takes listeners step-by-step through the process of finding, buying, equipping, provisioning and, above all, understanding, a boat, and there are great suggestions for boat drinks in The Sundowner. Soon, John Herlig, whose blog, AveDelMar.com, is one of the most poetic out there, will begin telling us his story as he sets sail from Florida with no particular destination in mind. Sailing royalty, Lin Pardey, was in touch a few weeks ago and will shortly begin a series of programmes about her and husband Larry’s extraordinary life. And I mustn’t forget Captain Bob May’s No Wake Zone Boating Radio Show. The NWZBRS is the radio show about recreational boating. It comes to you every week from Missouri’s magnificent Lake of the Ozarks and features all manner of guests, tips, tricks, practical advice and boating banter. We have a few other new shows in the works too.

There’s no shortage of great stories in the boating world and most of them involve normal folk like you and me. Sure, Boat Radio talks to adventurers, explorers and iconoclasts but I think the best, the most inspirational, stories come from ordinary people who’ve done extraordinary things. Please take a look at our website, www.boatradio.tv. I’m sure you’ll find something that interests you.

Between coming up with the idea and getting Boat Radio on air, I conducted a series of test transmissions using a terrific interview featuring Chris and Melody, operators of this blog. Chris and Melody very generously allowed a fumbling fool to experiment on them for a project that might never have come to fruition. And here they are being generous again, allowing me to take over their wonderful website for the day. I am eternally grateful to them both. If you haven’t yet bought a copy of Chris’ terrific book, ‘What’s Up Ditch!’, then I urge you to do so right away. It’s a terrific read. Hopefully we’ll have some news on that new album before the year is out too. No pressure, Chris!

I never did become Ray from Reef Radio, not by a long chalk. But do you know what? I think I’m happier than Ray. I’ve got my sunny island paradise but with a wife and two amazing daughters to share it. It’s late in Mallorca – 3:00am – but the thunder would prevent me from sleeping anyway so I might as well be here, at my desk, watching lightning illuminate the hills and the churning Mediterranean Sea. I just spotted a vintage RCA 77 ribbon mic on eBay. It’s just shy of $2,500 though so it’ll have to be added to the lottery list.

P.S. In case anyone was wondering, Ray from Reef Radio was played by Jeff Kober, better known as Jacob Hale, Jr in Sons of Anarchy, among many other roles. The strapline of the commercials was: ‘serve chilled’.