As the post to follow the last, this is the one to propel us forward. Past the difficult weeks we’ve had since Mel’s mom passed. Then… Engine problem #3 and lastly Hurricane Sandy. The one-two punch if you ask me. Actually… the one-two-three punch.

Toss onto that heap a mechanic who didn’t listen to a word I said and rebuilt a pump that didn’t need rebuilding, leaving me with the same issue I was towed in here with 3 weeks ago and well… we have a morale issue. Or… we should have a morale issue I should say.

I refuse to let it get me down since my family and friends are all safe after Sandy hit them on the East coast in NJ and NY. The boat and I are also fine and Jet? Well… he’s just Jet. He’s always fine. So in retrospect, morale is good. I’d love to write a cynical, ironically funny and self-depricating post but I’m just going to do a graceful update and try… as best I can to “push us forward.”

Melody sent me something the other day when I confided in her that I was losing my mind and getting a bit frustrated with the turn of events that have hit our little journey.

“In the end, I’ve come to believe in something I called the physics of the quest. A force in nature governed by laws as real as the laws of gravity. The rule of quest physics goes something like this: if you’re brave enough to leave behind everything familiar and comforting, which can be anything from your house to bitter old resentments and set out on a truth seeking journey either externally or internally and if you are truly willing to regard everything that happens to you on that journey as a clue and if you accept everyone you meet along the way as a teacher and if you were prepared, most of all, to face and forgive some very difficult realities about yourself, then the truth will not be withheld from you…”

I love this. I believe it whole-heartedly. After I read it, I grabbed Jet and decided to take a long walk. I took a route I’ve not yet taken along some streets down by the water. To be honest, I’ve not really wanted to “discover” new things about this place. I’ve just been trying to leave. And that… I believe is why I’m still stuck here. “…the physics of a quest…” Being in the now… not forcing it. After all, a trip takes us, right? Well, I’ve not been able to really relax into that sentiment. Time and money weigh on my brain… ANYWAY… I took a different route on our walk and came upon this curb.

Pretty amazing huh? Who randomly paints that on a curb? Well… Let me go back a bit here. Just before we left Nashville, I was walking Jet on our route around the block in East Nashville. As we turned up 14th street and headed for home, I came across some words written in chalk on the sidewalk. I took photos but never did anything with them. They have been on my phone since that day and now I guess it’s time to do something with them. 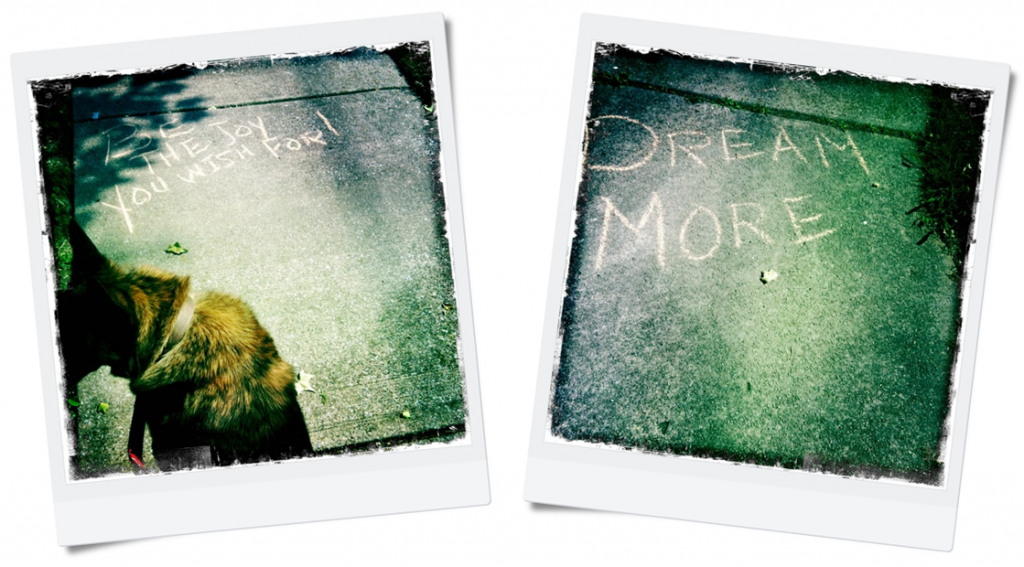 I guess we could all use these little reminders once in a while. It’s just funny that they show themselves to me in such an overt way. Maybe I’m one of those guys who needs to be hit with a brick. I didn’t think I was but…

“most of all, to face and forgive some very difficult realities about yourself, then the truth will not be withheld from you…”

I guess I’ll welcome the bricks. Anything that moves you forward.