You know, this week I was going to title this post “The Backlash” and I was going to tell you in a funny, cynical and smart-ass sort of way, about the negative feedback we’ve been getting from some folks. I know right? I never imagined that some people out there would be down right mean and outwardly hoping for us to fail. I mean I knew some people would be utterly clueless and never in a million years understand why I’d want to just give away a perfectly good “fill in the blank here, yada yada… whicha-ma-call-it” but come on. I came up with a couple of cool categories to describe the different groups of people we’ve encountered and I gave them names like “Claymore’s” yes, after the WWII land mine. Another was the “George Costanza’s” and things like that. I was going to post a snippet from an actual email that Melody received saying, “how utterly disappointed” this person was with her for making this “rash decision” ending with “I expected more.” Huh?

But I’m not gonna do that.

After my last post, you know the one about the Lincoln running me down? I’ve decided to take a different tack. I’m going to marvel at the absolute bitch slap handed to me today.

I had two incredibly difficult conversations scheduled and I would rather have a root canal than have either one. I had a meeting with the VP of my company to inform him I’d be leaving and shortly after that, I had to call Bill (The guy who owns the boat I backed out of buying~ last post). I still hadn’t spoken to him directly. I left him a voicemail and sent an email and hadn’t heard back. I expected he was pissed but I needed to speak to him. I owed it to him and didn’t want to skulk off with having just sent an email. I needed to “take my poison” and I was dreading it. Dreading both.

Now we’ve had a really busy and some would say stressful month with this closing and trying to find a new place to rent for the next two months, etc. We’ve sold or given away most of our stuff. And the dog… Jet… is absolutely confused. We’ve fixed the kitchen sink three, no… four times and finally it no longer leaks. We’ve got boxes labeled “books” and other’s labeled “Donate” and still other’s labeled “Boat.” Where is this all leading you ask? I’m getting there.

Today, in the meeting with my boss… I struggled… I mean really struggled to hold back the sudden swell of emotion that hit me as he arranged a couple chairs for us to sit facing each other. I had been fine reading my notes and going over what I was going to say and how I was going to say it. Positive. Nothing but gratitude and appreciation. I sat down and he looked at me, leaned back and clasped his hands behind his head and said, “So… what’s going on?” Like a cowboy in an old western just before a gunfight. As I started with, “First, I’d like to just say thank you. Thank you for a great gig for the last ten years…” Tears welled up. My hand holding my coffee cup started shaking and I was now careening down a river of emotions that I hadn’t planned on. All the stress? Now! It had to come now? “Holy shit,” I’m thinking… “this can’t be happening now. Not now. Get… A… Grip!”

After a moment, I regained my composure and continued. We had a heart-felt, honest conversation about dreams, goals, expectations and the dangers of getting too comfortable. We got through the details of my exit strategy and then… as we were ending the meeting… he stood up, looked me dead in the face and said, “I’m proud of you. I’m proud of you for taking control of your life and realizing that it’s not good enough. And I’m going to say the only thing I can say… I support you… 100%. I’m going to miss you. I always liked you. But I support you.” I nearly hit the floor. And then, he hugged me.

I’m not sure what I expected but I didn’t expect that. Maybe I expected to have to defend a position. A point of view. My validity. Maybe I expected a little more, “good riddance.” I don’t know… Maybe we’ve all gotten so jaded and used to confrontation and drama that it’s become the first response. Moments like these blow me away because of the natural conditioning towards anything but kindness and understanding for another’s situation. Why was I so stunned.

“Hello Bill? It’s Chris…” I braced for the onslaught of “you shady son-of-a-bitch… etc… etc…” and it didn’t happen. It was absolutely the opposite. “Hey Chris, I got your email and your voicemail and I’m sorry we couldn’t put this together.” WHAT? I agreed to buy your boat, started the survey process and pulled up short and you’re apologizing to ME? This is just bizarre.

We’ve got a place to rent now. Today… two days before we have to be out of our house. A good friend called and had a tenant unexpectedly move out on him. Really. Right when things were getting critical… we find a place. How funny. You know, from the moment Mel and I made this decision, nothing has been difficult. It’s all fallen into place. Maybe a little stressful at times but it’s worked. Every piece from the selling of the boat, the house and furniture to the new boat being available now that we have the money. And now… the apartment. Just when I think… uh, oh… here it comes. This is where things bind up and grind to a halt, I get surprised… again and again. Bitch slap.

I’ve had this piece of paper on my computer monitor for about three years now. It’s the full width of a piece of copier paper and it has a saying on it. A friend and co-worker gave it to me years ago when we were having one of our deep discussions about dreams, goals, expectations and the dangers of getting too comfortable. In plain, black courier it says, “I am abundant and the universe supports me.” Somedays I notice it and some days, I don’t. Right there in front of me. Not two-feet from my face. On a monitor that I look at every day for about eight hours. Somedays I actually miss it… Unbelievable. 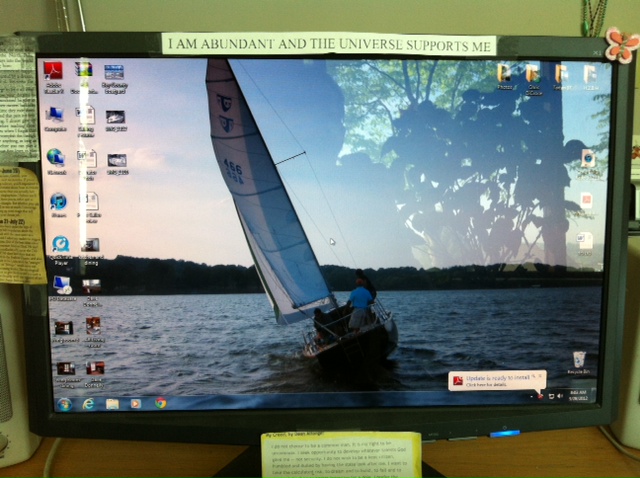 Know what? I’m going to make a point to see it every single day for the next two months.